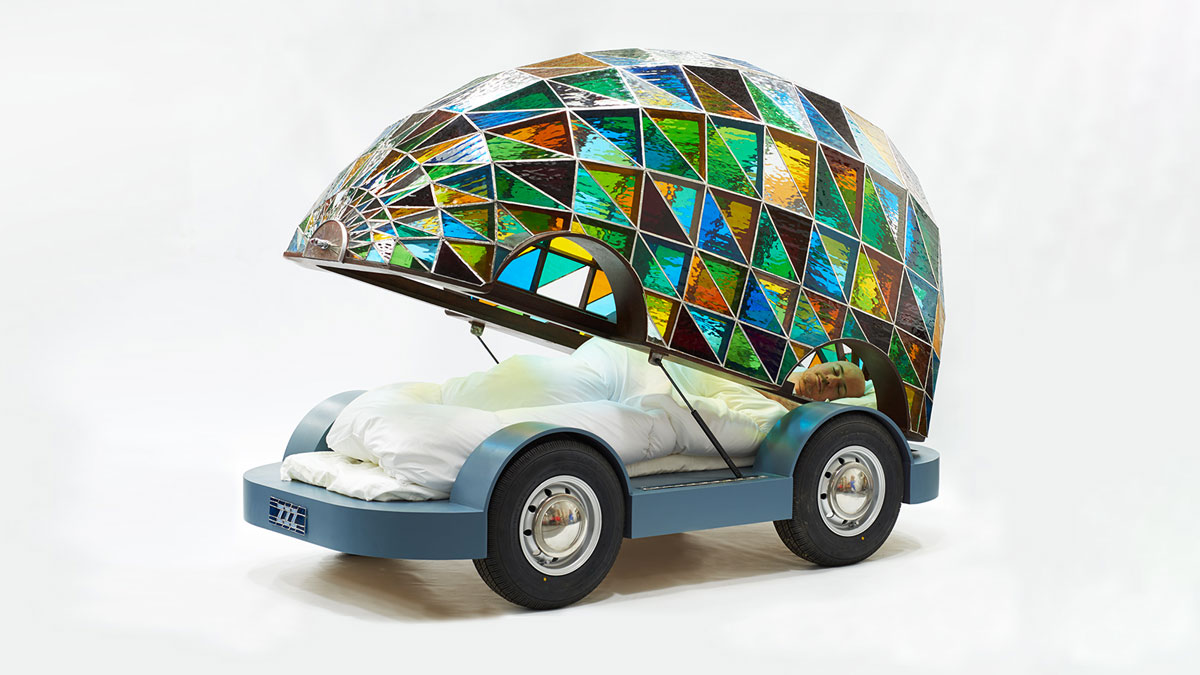 Dominic Wilcox must fall asleep in church a lot. The offbeat designer modeled his Stained Glass Driverless Sleeper Car of the Future concept vehicle after the stained glass windows of cathedrals, and calls it the "Mini Cathedral" for short. Wilcox created a prototype of the brilliantly-hued self-driving sleeper for the Dezeen and Mini Frontiers exhibition at 2014's London Design Festival.

Speaking of his project's motivation, Wilcox says, "I propose that in the year 2059 it will be statistically proven that it is safer to ride in a computer controlled 'driverless' vehicle than to ride in a human driven vehicle." Just 6 six years, rather than 45, later, his vision is already coming to light, albeit not such colorful light, and no vehicle interiors containing nothing more than a bed inside. Yet.

You can read more about the Stained Glass Driverless Sleeper Car of the Future in Wilcox's web portfolio, as well as see the rest of his zany inventions. You may have previously seen his One Foot Taller Periscope Glasses around here.

Sorry to all the Veruca Salts out there, but you can't have a Ripsaw M5 Robotic Combat Vehicle or an Oompa Loompa. Willy Wonka and the US Military say no...

Marissa Garner of Fay Productions makes all of these superhero stained glass prints with transparency paper, ink, a printer, and geek-laden love. Just tape one to a window and let the light shine in to get--Holy 50% opacity...

It's been a long 4 years since I last saw a New York City Taxi Drivers Calendar, but 2018's edition has broken the dry spell. In a move that pairs the pin-up aesthetic with satire, plus humans' inability to look away...

You've made the right decision (for once) and decided to call a cab instead of brave the old one-eye closed serpentine in your own ride. Good choice. Now for the tough part. Where do you live? Whip one of these babies...

See, ladies, why waste time exacting revenge upon your ex-boyfriend when you could be spending it pursuing one of these hot transportation professionals as your new boyfriend? The 2014 NYC Taxi Drivers Beefcake Calendar...

Uber and Lyft drivers, this one's for you! Pimp out your ride, and make every night a night of a thousand stars for your passengers with a tiny light projector that casts a big starry sky onto the roof of your car...

The WhizRider is a harness-style restraint system that serves as a portable car seat. Uh, for kids. Not, unfortunately, for your mama, who white knuckles the "Oh God!" handle above her door, gasps and hits her invisible...

When and where you use your 007s to play 007 is up to you, but, yes, the motorized license plate masks hide your vehicle's digits at the press of a button and, no, it's probably not a good idea to activate them every...

Just to calm your immediate concerns, yes, the forthcoming Elio will be available in colors other than Ghostbusters Slimer. An American-made, China-priced 3-wheeler, Elio heralds itself as a next-generation personal transporter...

Ha! It's A DIY clown car! Except the P.50 isn't clowning around. Builders of car kit, available in electric and gas models, will find themselves the proud owners of fully functional examples of the World's Smallest Car...

The Legacy Power Wagon. As the name suggests, it isn't new, but with only a handful crafted per year--by artisan auto mechanics at Legacy Classic Trucks in Jackson Hole, Wyoming--it remains one of the truck world's most...