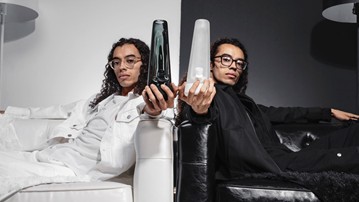 Four score and twenty years ago...no wait, that's a different 420. And, if I remember correctly, an ode to something not nearly as interesting as these 14 smokin' hot gifts for weed enthusiasts. One thing they do share in common, though, is that they are both brought to you by a great writer, orator, and leader of this country.

Note: All smoking and marijuana products are priced as they were at printing on April 20, 2022. Pricing, and availability, are subject to change.

Shine and its 24K Gold rolling papers add a new action to the ever-growing list of Things You Can Do with Gold. Currently populated by: 1) Eat it; 2) Shit it; and 3) Buy expensive things with it. Stoners and recreational tokers alike will rejoice to lay their lungs upon number 4) Smoke it.

Relax. Calm down. Funny how those have turned into fightin' words. On top of being difficult states to achieve even when some condescending butthead isn't issuing them as a command. If we were together I'd say no such thing to you. I wouldn't say anything. I'd just hand you the peace pipe. Or, in this case, the Summerland handmade ceramic peace bong.

Summerland cooks up all the stoneware that will get you baked in small batches in their kilns in California. At printing their bong line consisted of Chongo, Pleasure Point, and big boy Land Yacht models (shown left to right in the image above), each fired in multiple colors. The Pleasure Point is the smallest of the 3 at 10" tall x 4.5" wide, while the Land Yacht will dock on your coffee table at 12.5" tall x 7" wide.

Come to the Dark Side...or the Light Side. They both have the sexiest smoking accessories your strains will ever see in Session Goods' Designer Series of all black and all white bongs, pipes, and cleaning caps.

In honor of the brand's 4th birthday, Session released the Designer Series as a limited edition run that paints the often loud and brash cannabis culture in the classic designer aesthetic and refinement of monochromatic black and white. Each of the line's products come in sleek and commanding Ash Black, and clean and elegant Cloud White. Buy the Designer Series bong, pipe, and cleaning cap in a single color to reflect your style, or as a black-and-white mix to bring some yin-yang to your toking life.

Bong Appetit: Mastering the Art of Cooking with Weed

Bong Appetit is for the THC-phisticated. Its recipes aren't just baked goods that will get you baked good, they're dishes from sweet to savory you could cook and serve with pride at your next foodie gathering or dinner party. Note: I do recommend full content disclosure prior to serving if you go this route, even if you're hosting Stuffy McStuffersons like my Aunt Jan who could stand to stuff a little MJ down their pieholes.

The serpent is at it again. This time, though, its temptation is a pair of snaking, maze-like water pipes, since it knows you'll need more than an apple to succumb to Original THCin (that said, in a pinch, you can bore a hole through an apple and make a pipe out of that too.)

The Serpent-01 and Serpent-01H Water Pipes from Space-X bring as much visual interest to the smoking experience as they do "the smoothest hit on earth*." (*But probably can't compete with the heavens, which I hear have both pipes and weeds that are truly divine.) Both versions have a percolator design engineered with CFD-tested thermodynamic principles to cool incoming smoke and make sure the taste of your bud or wax is as pure and authentic entering your lungs as it is growing in the Garden.

Dope on a Rope Soap

Dope on a Rope says, "Don't smoke it, SOAK it!" But probably if you buy one of their hemp oil soaps carved into the shape of a cannabis leaf, it means you're as much a fan of the former as the company hopes you'll become of the latter.

Dope on a Rope Soaps are all handmade by artful soapers (and stoners?) Jason and Jenny out of a small southwest Florida suds shop. DoaR soaps are made from coconut, sustainable palm, safflower, and, oh yeah, hemp seed oils. Naturally, they also hang from a hemp rope.

KNNOX's is a lighter fit for James Bond. James Bond the Sean Connery years, given its sleek mid-century modern aesthetic. The Lighter is a throwback in design alone, though. London-based KNNOX debuted the piece in July 2018, with a construction that's all 21st century: precision machined from raw solid brass; and engineered to shoot its flame out the side, so you can both lick your target straight-on, and set the ignited lighter down on a flat surface.

Say high to Casual Strains cannabis clothing, T-Shirts and hoodies with cool, contemporary designs that give a nod to cannabis culture, without making those who wear them look like a stereotypical stoner. Each of Casual Strains' artistic takes brings life and whimsy to a popular breed of cannabis, and a little bit of weed education to anyone who sees them.

The Blazy Susan Spinning Rolling Tray is for smokers who like to stay tidy and organized. (Hey, I guess they're out there!) Its trademark color is 50s diner pink, so score if you need a gift for your girlfriend, but the brand also has black trays, as well as some mighty fine spinners made of cherry, walnut, and birch woods.

Blazy Susans are carved with custom cuts for your grinder and rolling activities, plus have a cup holder and phone holder "so you can conveniently stream your sesh or watch videos while you twist up a Blazy Susan pink joint." (Blazy Susan has a whole line of smoking accessories, and most of them are Blazy Pink too.) Trays also come with a silicone slap insert and dab pad, in your choice of several colors, and an optional Silicone Debowler / Ashtray and Dab Station.

Sorry, hippies and artistic stoners. Now that marijuana is this close to mainstream acceptance, and not that much farther away from nationwide legalization, it's time for the techies and trendsters to move in and take over the conception, design, production, and marketing of its associated paraphernalia. Oh, and the profits. Definitely, definitely the profits.

The Heir Water Pipe is a bong made by techies and trendsters who also don't want to be misconstrued as checked-out slackers when they segue their weed smoking hobby from private to public spaces.

I think it looks nice.

Granted, I don't feel something like the Heir is necessary when I'd rather have a "contemporary object" that can, say, give me an orgasm every time I touch it and whisper, "galoshes," but I could say the same thing about a good 90% of the stuff I write about here, so I'm not going to give the Heir too hard of a time.

Dad Grass isn't quite as illicit and un-Dadly as it sounds, but it's not entirely innocent - like a reference to the grass stains on Dad's New Balance sneaks after mowing the lawn - either. Dad Grass smoke packs contain pre-rolled joints stuffed with 100% organic hemp CBD. They're on a mission to bring back "the mellow sensibility of the casual smoke" whilst paying tribute "to the timeless staples of dad style.

The Dissim Inverted Lighter turns the flames of Hell upside down. OK, more like one little flame. And I guess it's not from Hell, it's from butane.

Dissim says the Inverted Lighter is the first of its kind, able to light a target the traditional straight up, long, and strong way, or while turned on its head. Inverted, the flame still licks upward so you don't have to contort your hand, or the thing you want to light, and risk burning yourself. Or lighting the wrong thing on fire.

BYOB. Where VITAE Glass is concerned, that's Build Your Own Bong. One look at the modern, architectural designs of VITAE's lab-grade borosilicate glass bases, percolators, and mouthpieces, and the smooth wood connector rings that hold them together, and I think the better term might even be BYOBB. Build Your Own Beautiful Bong.

VITAE Glass sells a full range of modules that smokers can combine to create a custom bong ideally suited to their own 420 preferences and lung capacity. VITAE says, "Not smooth enough, add more percolators to your setup. Want something that hits hard, go with a straight tube and build it as high as you want. The sky's the limit." (Well, probably more like the basement or living room ceiling's the limit...but that sounds like a fun challenge.)

According to LEVO II, the LEVO II herb dryer and oil infuser is "for the infusion connoisseur." According to me: Sing a song of butter / infused with weed I dried / It's 4 & 20, blackbirds! / Let's get baked eatin' my pie!

The LEVO II is an upgraded version of LEVO's botanical-transforming kitchen appliance (and just so we're clear by "botanical," I definitely mean marijuana.) The machine streamlines the process of making herbal infused oil, butter, honey, and glycerine, adding failsafe Dry and Activate cycles so you can prep the potency of your herbs before infusing them, and a wireless connection to the LEVO app so you can monitor and control infusions remotely. The app also stores drying and infusion history for repeat performances, and contains instant access to a time / temperature calculator, and mind- and mood-altering recipes.

Ha! More proof that if pens wish to avoid extinction they better start bringing more to the table than a barrel full of ink! In fact, Grasshopper makes the biggest leap of all--the one I've been waiting for: it eliminates...

Get a grip on your puff-puff-pastime - a real solid grip with this Glass Knuckles Smoking Pipe. Lightweight and made especially for a 5-fingered grip, the pipe gives smokers two options for their inhalation pleasure:...

If nothing else, the Studenglass Gravity Pipe at least appears to have Seth Rogen's hack of approval. According to a video the actor posted on his Instagram account, hitting the bong produced a delightful 25-minute coughing...

Mike Bites. Now this is the kind of earful I'd take gladly. No real human body parts or nagging from my mama required with Mike Tyson's cannabis gummy ears, just a chill night and better sleep. And a bit of glee sinking...

Cannabidiol, or CBD Oil is a legal alternative extracted from cannabis that is being used to treat everything from anxiety to arthritis pain. Unlike THC, CBD Oil doesn't give the user any noticeable head high but can...

Vessel's Helix one-hitter has some serious drip. And since I'm pretty sure no one in the generation that made up the slang term "drip" will be reading this, but probably some Gen Z parents will, that means the dry herb...

They call the Screwpop Hit Kit a "personal herb tool," which sounds like a major clash of the dialects to me. Urban Dictionary meets...corporate PR lingo that won't offend my Aunt Jan. Or how 'bout this SAT-ready analogy:...

We all need a little balance in our lives. Some of us find that balance in the contents of a pipe. And for those dudes and ladies, what better pipe to represent that which you seek but the Balance Pipe from Tetra?...