Dude's Must See Products for August 2022 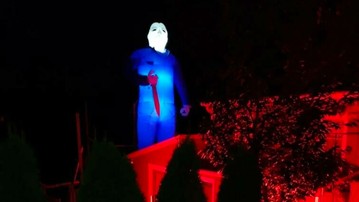 Ahhh, August. The month leading up to Halloween. No wonder so many of Dude's must see products were...wait a minute. Halloween is in October, right? And October doesn't come after August...right? Geez. I ran at least 20 Halloween costumes and decorations in August. Three of them even made it onto the must see products list, four if you count the Alfred the Giant Crochet Octopus as a piece of Halloween decor alongside the Human Face Baseball Hat, Inflatable Skeleton Lovers, ad 35-Foot Inflatable Michael Myers. I sure kicked off this spooky season shit early, didn't I?

Note: All must see products for August 2022 are priced as they were at printing on September 1, 2022. Pricing, and availability, are subject to change.

While made for sporting events, cafeterias, and warehouses, I don't see any reason why hanging a 44" x 26" red LED wall clock in your living room would be anything but swell. Especially if, like me, your 40-something vision isn't what it used to be. And even more especially if you've got a neighbor with a perfectly-placed bedroom who you're looking to pull a Kramer-and-The-Chicken-Roaster on.

Make your Sharpies look as sharp as they write with the Dango Permanent Marker, a new hard shell for your inky implements from Dango Products' Pen and Capsule collection. CNC machined from 6061 aerospace grade aluminum and stainless steel, the Dango Permanent Marker adds a "robust and substantial grip," tethering points for clipping and dangling, a box cutter, and a slick industrial aesthetic to the humble Sharpie.

Spooky season is coming up, and these Inflatable Skeleton Lovers - the Boning Bones, if you will - are the perfect front yard decoration to, er, erect if you want to offend and piss off the Karens in your neighborhood. But you know what I'm thinking, dudes? Why stop at Halloween decor? If you want to make a real statement, and stir up some proper shit, why not make these dead boot knockers a permanent lawn ornament installation? They'll be like the inflatable Ghostbusters Ecto-1 I told my mama to put in her yard, but even better!

This Human Face Baseball Hat is ready to play ball...with anyone who thinks they can look it in the eye without shuddering. Yeeks. Every time I glance at Sabri Tunca's handmade creep fest, I have to shake it off like a nervous dog. Who'd have thought 100% natural merino wool felt could be so disarming?

Hints: 1) It's a relative of cod; 2) It claims to be a performance enhancer; 3) Use it when you're ready to suck it up, bite down, and work your ass off.

If you want a smart workstation with a futuristic look, in-desk display, a full top surface of wireless charging, power outlets galore, and nary a cable in sight, I think you're beginning to see the Lumina. The Lumina Desk is a forthcoming workstation designed to be your "ultimate workspace for productivity." Or just, like, a really cool setup for gaming and dicking around on the internet.

Halloween Ends is coming to a streaming service near you, and possibly to your kids the moment they see this 35-foot inflatable Michael Myers in someone's yard when they're trick-or-treating this year. And in both cases, my sense is that the best adverb to describe how Halloween Ends will be "badly." I mean, series almost never finish well, and as for the kids...damn. Thirty-five feet of Michael Myers lit up and looming above, swaying in the wind with what's gotta be an 8' chef's knife dangling from his hand - that's enough to scare the snack-size Snickers out of a grown-add dude like me.

Made by Kevin Malinski of JK Antiques, the supersized inflatable Michael Myers depicts the slasher extraordinaire as he appeared in the original 1978 Halloween film. Complementing his gargantuan height are width and depth measurements of 8 feet.

Not that a toy has to be believable but...think of the elevated creative possibilities of an orange tabby licking his crotch. The Crotch Staring Cat comes with interchangeable testicle, mushroom, flower, and lipstick crotches. Cute. But a Crotch Licking Cat could include testicle, ice cream cone, lollipop, and George Costanza wedding invitation envelope crotches!

I can't tell exactly how giant Alfred the Giant Crochet Octopus is, but if the evidence in the image gallery above is any indication, he appears to be the equivalent of 1 x standard lady who has not yet mastered the art of photographic lighting, camera positioning, or the selfie.

Alfred's adoption listing (i.e., Etsy shop So Wool So Cool) lists him just as available in sizes Small, Medium, and XXL, the latter the only real option, in my opinion. I mean, why spend a wad of cash on a crochet octopus if it isn't big enough to wow your friends, spoon at night, and possibly star alongside you in a new TikTok video series that makes people wonder if you're having relations with a crochet octopus like we all wondered if that dude from My Octopus Teacher was having relations with a real octopus?

Fishing. Now that's another skill I don't have and would...not be inclined to learn. Don't get me wrong, these Daggerfish Handreels for backpack fishing look like great designs, and will definitely keep an angler's trekking load light, plus fit neatly into preppers' survival kits. I'm not knocking or downplaying them in any way. It's just, looking at a nifty handcrafted fishing kit that combines a rod, reel, and tackle box into a 6" tube with a coupla corks on the ends reminds me I have no clue how to use it.

A little floating fire with a bioethanol flame blazing from a stone center. That sounds...well, it actually sounds about as safe as candles, incense, and tabletop fireplaces. And since the Myconos Levitating Firestone is appealing to the same demographic of yoga people, meditation people, and dudes seeking gifts for their girlfriends, I guess I don't have any more effusive cynical remarks about how it will probably burn your house down than I do for any of those other open-flame mindfulness accessories and pieces of home decor.

OMORPHO weighted sports and fitness clothing won't just omorpho you into a whole new level of athlete, or human with a hot, ripped body. But the line of "MicroLoad"-enhanced tops and bottoms could give you an edge as you work your ass off to achieve those goals yourself.

OMORPHO MicroLoads are small spheres of weight evenly distributed across key areas of OMORPHO activewear and, in turn, your body. The weights are heavy enough to increase the challenge to your body as you perform various sports and fitness activities, but light and unobtrusive enough that you can still move freely and naturally, with almost the same speed and intensity.

I brake for dicks. No wait, you brake for dicks. At least once I've secured a couple of Dick Brake Light Prank Decals onto those wee red covers on the back of your car. And by you, I mean my friend Cornelius, because he is my favorite dude to gag...especially with a dick...and furthermore, I would never do such a thing to you.

Dude's Must See Products for January 2023

Dude's Must See Products for October 2022

October 2022 was full of tricks and treats, but they weren't all related to Halloween. Or at least, not Halloween-specific. Tricks included the Tic Tac Gun (above), Crazy Aaron's Angry Putty, the Puking Regan Bottle Pourer...

Dude's Must See Products for November 2022

Dude's must see products for November 2022 say, "Let the holiday shopping, and the holiday gift guides, begin!" What I have here is largely a roundup of roundups - all my best gift guides for the month of November consolidated...

Dude's Must See Products for September 2022

Know what I've got to say about Dude's must see products for September 2022? The Mini Jumbotron and Winnie the Pooh: Blood & Honey. That is all...

Dude's Must See Products for January 2022

January was a good month for breathing PCs, yoga pants sex, and your worst fears. So, yeah, same ol', same ol' in the product department around here. Enjoy my roundup of Dude's must see products for January 2022...

Dude's Must See Products for June 2022

June! Summer! Longest day of the year! Best month ever! And now...it's over. As I shed a tear in my beer - albeit still outside in bright, toasty sun, and from a lounger on my balcony - for the month of June, please join...

Dude's Must See Products for May 2022

When most people think of May, I think they naturally think of May flowers, May the 4th be with you, maybe May Day or Memorial Day. But me, I think of Camelot. The musical. Sigh. I hate to reveal this about myself, but...

Dude's Must See Products for July 2022

No fireworks in Dude's must see products for July 2022, but there is an ultra-loud disturbance of the peace that will probably give your dog a fear complex in the Screaming Aztec Death Whistle, pictured above. And if...

Wonderful, fantastical, cutting edge, high-tech products, I hardly knew ye. These 12 cool products that were discontinued or never made will probably make you feel a bit nostalgic, or maybe even bummed to have missed...

Dude's Must See Products for February 2022