Dude's Must See Products for October 2022 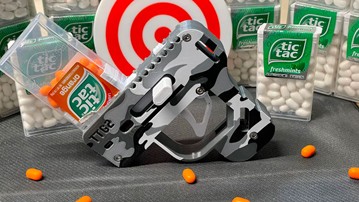 Note: All must see products for October 2022 are priced as they were at printing on November 1, 2022. Pricing, and availability, are subject to change.

Hints: 1) It's finicky: sometimes it holds tight, other times it pushes away; 2) Use it one way to achieve openness in your household; 3) Use it another to protect areas at risk of injury.

Not sure how much I'd want to swing from the chandelier, but I'd sure like to light it up using one of these Wooden Steampunk Light Switch Covers. I can hear my wife now at our next dinner party: It's time! Get the ladle and ready the wine! Everyone! Napkins on laps! Dude, grab the lever, and hold it tight! Hold! Hold, Dude, hold 'til my cue! ... OK, bread basket is set. Beef Burgundy is in place. ... Now! Flip the lever now!

Presenting the Alphabet: 16 Gifts that Start with A

And, you guessed it, next time they'll start with the letter "B." All the way up to the letter "Z," so 26 alphabet-themed gift guides in all.

Yeesh. What have I gotten myself into? Am I going to be able to make it all the way to the end? Guess we'll A, B, C.

Is it weird to say whatever this Exorcist Puking Regan Bottle Pourer is puking up looks delicious? What is that, a Grasshopper cocktail? Maybe some sort of liquid key lime pie? As long as it doesn't taste like the vomit of a young girl possessed by Satan, I'm down to try it.

Who's angry? Who wants to get angrier?! Well then, here's Crazy Aaron's Angry Putty, at your service. That's my guess, anyway, because I can't imagine a squeeze, stretch, and fidget toy self-described as "Putty That Fights Back" is going to provide much relief of the stress and anger you'd normally use it for.

My hips don't lie...they frickin' hurt. Tight, ropey, maybe not quite ready for Hip-Fin levels of pain to release them, but, hey. If it's agony for minutes and ecstasy for days thereafter, I'm dude enough to take it.

I've never much cared for hoofin' it, especially when I have my friend Cornelius to drive me, but these Creature Feet Shoes are giving the term a whole new and exciting meaning in my world. Not that I'd ever wear what are essentially a pair of heelless high heels, as I can barely keep my balance in flip-flops, but on my wife, She-Ra: Princess of Power? Huzzah!

Unfortunately, there was nothing I could say to convince her to go as a Sexy Goat for Halloween.

The Tic Tac Gun takes aim at anyone who's eaten the garlic & cheese bread, or drank a whole pot of coffee this morning, and pelts 'em with fresh breath.

Possibly breaking a tooth in the process.

Hey, you can't have fun and fight halitosis risk-free, kids!

And, dudes, if she pulls the whole "My eyes are up here" thing in the Medusa Bodysuit, don't forget to remind her that looking into Medusa's eyes is what turns people to stone.

Yippee Ki Yay, motherfu- uh...dudes, it's a Die Hard Advent Calendar! Leatherhead Laser Work even laser-cut his clever, original countdown design to depict one of the best scenes in the movie: Hans Gruber plummeting to his death from the top of Nakatomi Plaza. Ahhh, really gives you the Christmas feels, doesn't it?

We've seen some silly adult onesies, some sexy adult rompers, and even some wicked adult animal suits in the past, but I can't say we've seen adult onesies like Blamo's before. Adult onesies with animal themes that are, dare I say, stylish? Fashion-forward? Luxe?

Hints: 1) It's accepting of all shapes and sizes; 2) It's a straight shooter; 3) You might call it a post-drinking bidet.

In a bad situation, I think I'd say the same thing about seeing Assless Yoga Pants as I would about seeing Superman: Here they come to save the daaaaay!

Dude's Must See Products for November 2022

Dude's must see products for November 2022 say, "Let the holiday shopping, and the holiday gift guides, begin!" What I have here is largely a roundup of roundups - all my best gift guides for the month of November consolidated...

Dude's Must See Products for September 2022

Know what I've got to say about Dude's must see products for September 2022? The Mini Jumbotron and Winnie the Pooh: Blood & Honey. That is all...

Dude's Must See Products for January 2022

January was a good month for breathing PCs, yoga pants sex, and your worst fears. So, yeah, same ol', same ol' in the product department around here. Enjoy my roundup of Dude's must see products for January 2022...

Dude's Must See Products for June 2022

June! Summer! Longest day of the year! Best month ever! And now...it's over. As I shed a tear in my beer - albeit still outside in bright, toasty sun, and from a lounger on my balcony - for the month of June, please join...

Dude's Must See Products for May 2022

When most people think of May, I think they naturally think of May flowers, May the 4th be with you, maybe May Day or Memorial Day. But me, I think of Camelot. The musical. Sigh. I hate to reveal this about myself, but...

Dude's Must See Products for July 2022

No fireworks in Dude's must see products for July 2022, but there is an ultra-loud disturbance of the peace that will probably give your dog a fear complex in the Screaming Aztec Death Whistle, pictured above. And if...

Dude's Must See Products for August 2022

Ahhh, August. The month leading up to Halloween. No wonder so many of Dude's must see products were...wait a minute. Halloween is in October, right? And October doesn't come after August...right? Geez. I ran at least...

Wonderful, fantastical, cutting edge, high-tech products, I hardly knew ye. These 12 cool products that were discontinued or never made will probably make you feel a bit nostalgic, or maybe even bummed to have missed...

Dude's Must See Products for February 2022

Dude's Must See Products for March 2022

Dude's must see products for March 2022 get jiggy with it. And by that I mean they satisfy normal urges in a strange, jiggy if you will, kind of way. Craving chocolate? Try ChoClits. Jonesing for sexy time? How about...