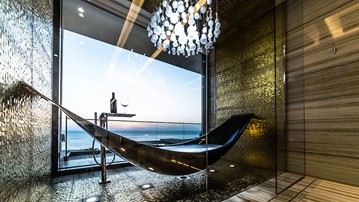 If you're a man who thinks of his bathroom as his other office - or his king's chambers - why shouldn't you have a wish list of goods and supplies...and a luxury bathtub or two...you'd like to see inside it? I can't speak for other dudes, but if I add up the time I spend in the bathroom showering, shaving, grooming, and making offerings to the porcelain god, I'm at, like a quarter of my life. I want that place to be fully stocked and nice.

Note: Bathroom item prices are approximate, and listed as they were at printing. Prices are subject to change.

Privacy isn't just about enclosing yourself in a room behind a door, it's about not having wives, girlfriends, kids, or other guests at the party knocking on it or trying to talk to you through it while you're either enjoying the best or suffering through the worst part of your day.

How to Pee with Morning Wood Poster

A self-help guide to dealing with the enormous issue I face first thing in the morning every single day of my life and it's packaged as whimsical wall art that will add immeasurable character to my bathroom? How to Pee with Morning Wood, you could be the greatest gift I'll ever acquire. Right next to my huge penis.

Tyler Durden doesn't need any help from pheromones to get laid, but, uh, I could maybe use some if they work. And Tactical Soap maker Grondyke Soap Company assures me the evidence suggests that they do. Tactical Soap is a line of sudser uppers infused with proprietary bio-identical pheromone formulas. Or, as could more appropriately be deemed the case with the company's original Fight Club-inspired release, the Durden: it's a bar of soap that's been punched in the face by biological lady bait.

Usually when people describe themselves they inflate the truth or do that reverse psychology trick where they say a bunch of self-deprecating things in an effort to convey the opposite meaning. In both cases they would like everyone to believe they are awesome. But when Splinter Works, creators of this carbon fiber Hammock Bathtub, terms themselves designers of "sculptural furniture that is engaging and inspiring" and suggests pieces forged at their hands will "enrich the lives" of those who use them, I don't see an ounce of exaggeration at work. To me, The Hammock Bathtub looks to be the Supreme Mac Daddy of wash basins.

Why stop at the bathtub? Carbon Fiber Gear's porcelain god lid is made of hand-layered, 550,000 psi tensile carbon fiber applied around a pre-molded foam core (as opposed to wood) to maintain the material's trademark lightness. The carbon fiber features a 2 x 2 twill pattern, which CFG claims looks swell in photos, but gets its true justice only when held in one's hands. Hopefully anyone who buys the toilet seat will hold it in his or her hands only once prior to use.

Clark Griswold-approved, the IllumiBowl gives you: A) an alternative to blasting your eyes with the overhead light in the bathroom at night; B) a fun way to help potty train your kids; and C) a better chance of not whizzing on the side of the bowl, the floor, or your bare foot.

The IllumiBowl apparatus is a palm-sized device that suction cups to the outside rim of your bowl, and then directs its LED color-changing magic inside. The light is motion-activated, so it turns on and off automatically, and each IllumiBowl has 8 light colors, plus a few patterned illuminations to choose from. The pack requires 3 x AAA batteries for operation.

Sith Happens. Dude, I'll bet it's especially Sithy when Sith happens to Vader and he's gotta take off the entire bottom half of a life support system to relieve himself. I thought I'd experienced the worst of the worst myself when I ate a bad fish taco during a SCUBA trip. 60 feet under, wearing a full-body wetsuit, and the only thing waiting for me at the surface was the head on a 30-foot dive boat. Sith Happens.

And here's a toilet decal to remind you of it, and maybe help you to appreciate all the times you do make it to the toilet without losing your Sith.

Rub-a-dub-dub, I want a wooden boat bathtub. Even more than I want a Hot Tub Tug Boat. Because while the latter may be slightly cooler and more likely to help me win friends and influence people, Unique Wood Design's Baula Tub is not weather dependent, and does not require access to a large body of water for daily use. Maybe even thrice daily use given how grand and luxurious it looks.

Methven's Aio shower head uses Aurajet technology to widen your wetness and deepen your experience with your water fixture every time you turn it on. The company says the Aio aims for no less than "maximum body contact and all-over warmth."

Shaped like a halo (wonder if it will cleanse me of my sins along with my sweat and dirt) the Aio's encircling water holes are positioned such that they spray water in a criss-cross, rather than a straight needle pattern. This design expands the shower head's coverage area without, according to Methven, sacrificing spray force. They estimate the Aio achieves twice the skin contact coverage of a traditional shower head, and generates up to 25% more spray force than the "needlers."

Made of porcelain, the yellow submarine contains a soap dispenser (standing in for the periscope), a toothbrush holder, and 2 small containers with lids for storing cotton balls, Q-tips, hair ties, and Lucy in the Sky with Diamonds. And if the overall aesthetic of the organizer weren't enough of a draw, this yellow submarine is also modular with magnetic connection points, so you can split off its 4 segments for easier access, or because you can't keep anything in your life from falling into complete disarray.

TUSHY is the friend who has your back no matter what. The one who's there time and again, cleaning up your messes and washing off the remnants of a crappy day. The one who always makes you feel good. Even after you gorge on Chinese takeout and bacon chili cheeseburgers, or eat that spicy tuna roll you know smells kinda funky. Truly, the only thing TUSHY won't do for you is pull off a wad of toilet paper and wipe your ass.

But TUSHY will spray it off with what feels like an upside down spring rain shower, so you won't ever have to reach for the TP, or wipe your own ass again either.

TUSHY is a bidet attachment that connects to your existing toilet and its plumbing lines to bring luxury and contentment to your nether regions. If you've ever used a bidet you probably know what I mean. If you haven't, TUSHY is an easy, unobtrusive, and fairly inexpensive way to give your butt the kind of love it never knew it always wanted.

K-25 Towels aren't just for you dudes out there still using your bath towels from college. Though you might be the first to consider adding a set of these stench-free, super-absorbent dryer-offers to your bathroom. K-25 Towels are for all men who regularly experience Perpetually Damp Stink Towel Syndrome. Men whose bath, gym, beach, and athletic towels never seem to last more than a couple months without deteriorating into a dense, smelly, moldy mess.

K-25 makes towels they say absorb water like a "super sponge waffle." In addition to taking you from wet to dry lickety split, this design of waffle squares with honeycomb pockets allows the towels themselves to dry fast. This curbs bacteria and mold growth, plus the rank, dank smells that come with them.

Like your drill enough to use it to power scrub your toilet and shower tile? The Drillbrush cleaning kit includes a trio of brushes you might recognize from under the sink and next to the john, but instead of plastic handles on their nylon-bristled ends, Drillbrushes have quick-change shafts. Sized 1/4" and ready to pop into the cordless drill you already own.

Archer's tagline is "air superiority". I'm not sure why they don't fully maximize the play on words by going with air of superiority, but, whatever. Maybe I'm missing something. I think the smell of a little golden treat I just awarded the toilet is inhibiting my cognitive functions.

The company contends its trio of room sprays - and that's all rooms in your man pad, not just the bathroom - are "a welcome option within a product category that has only offered flowers, ladybugs, and honey-suckle dreamscapes."

Poo-Pourri, the spritz-before-you-shitz toilet spray, packs 2-ounce bottles of their Trap-A-Crap and Royal Flush sprays into a sweeeet toolbox-themed carrier. For those unfamiliar, Poo-Pourri stifles bathroom stink before it's able to creep out of your own toilet bowl deposits when you deposit a few pumps from its nozzle into the bowl before you assume the throne. Poo-Pourri's blend of natural essential oils spreads across the surface of the water, creating a scent barrier over anything that subsequently plops! through and settles beneath it.

Flipping the bird becomes much more than a cheap gesture with this Middle Finger Toilet Paper Holder. Instead, Pygmallionaire's 3D-printed and hand-painted metallic design is a functional luxury!...

How to Pee with Morning Wood

A self-help guide to dealing with the enormous issue I face first thing in the morning every single day of my life and it's packaged as whimsical wall art that will add immeasurable character to my bathroom? How to Pee...

A Tandem Shower? That's waaay better than a tandem bike. Or, like, a tandem trip to the art museum. Good on you, Boona, for coming up with a way for my wife and I to spend more quality time together that serves us both...

Here we go with another robot taking over a human's job. The Shine Bathroom Assistant is aiming to force you out of your toilet cleaning tasks with an automated design and chemical-free sanitizing pods. What a punk!...

Sweet, Mode, I've been looking for a wireless electric toothbrush to go with my black marbled bathroom wallpaper and black toilet. Really...

I know what they say about diamonds, but Charmin, a toilet paper roll that's forever? Why...why...yes! I do!...

What if your bar of soap's slivered remains could transform from flat to stacked with no hassle, no waste, and no complex procedures or anesthesia? Simply and terrifically brilliant--like so many Kickstarter projects--Stack...

Stone Forest calls their bathtub "Natural" for its raw design, a rugged just-rolled-down-the-mountain aesthetic, rather than the precision-cut and polished-to-cold-industrial-modernity one we might expect from this type...

A sick skull toilet with LED eyes and a host of smart features called...the WaterThrone? Doesn't really reflect the toilet's sculptural uniqueness, or its creepiness, very well. I would've gone with BoneThrone. The Head...

Please Don't Do Coke In The Bathroom Neon Party Sign

Please don't do coke in the bathroom? Geez, the things you gotta be polite but explicit about asking people these days. First it was just, "Please wash your hands," and "Please don't flush things that aren't toilet paper...

"Squatting to eliminate is healthier." Golly I love the Squatty Potty's euphemistic appeal to my sense of self-preservation. Sitting on my porcelain sidekick with my feet resting on a 9" stool, torso pitched forward approximately...

Strands of hair, sock fuzz still stuck to your feet, and shaved pubes are no match for the teeth of the TubShark, a new one-swipe tub strainer from a coupla dudes tired of using their fingers to pick out hair, fuzz, and...