Stuff to Keep in Your Car 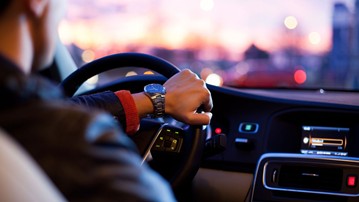 Whether I'm in the car commuting or road tripping, driving or riding shotgun, there are certain items I like to have on hand on the off almost certain chance I get stuck in traffic.

My #1 choice: a chauffeur. Yeah, that's right, chillin' like a pimpity-pimp with noise-cancelling earbuds in and Reddit pulled up on my phone in the back of a Toyota Prius Lyft.

Ride apps do get expensive though. And at least 50% of the time, the car I end up in has a strong odor of vanilla air freshener mixed with fried takeout and farts. So, still can't give up driving.

And still have an ongoing list of recommendations of stuff to keep in your car.

When I say driving is a pain in my ass, I mean it. My back and shooting down my leg too. Docs, trainers, and physical therapists will often prescribe lacrosse ball work along with foam rolling to isolate and dig in to smaller muscles, or smaller areas of larger ones.

I find that when I get butt hurt on the road, and it's not from some a-hole cutting me off, sitting on a lacrosse ball can shift or free up the offending muscle / nerve / fascia and make the continued sitting more comfortable. Same goes for the airplane.

This RitFit Massage Ball Set comes with 2 lacrosse balls, plus a spiky ball for the real masochists.

"Cheap" being the key word here. I keep my good sunglasses in the house so I have them when I'm walking somewhere, and so that they don't drop to whatever ungodly low number of degrees it is outside in the winter, and then fog up for 5 minutes when I put them on my hot (so hot!) face, rendering me blind while driving from either the opaque lenses, or the sun when I angrily rip them off and rub them on my leg to warm up.

But sometimes I forget my good sunglasses in the house, so I always like to have at least one cheap backup in the glove box or side of my door. These 80s retro shades are a good choice because they're plastic everything, lens and frame alike, and don't require much thought or care in tossing them 'round your ride.

One time I got stuck at a traffic light for five light cycles, and I almost lost my mind in both anger and hanger. Why wasn't anyone moving?! Why was traffic in this godforsaken town such shit?! Why didn't I have any food in my car?!

If I am in my car, snacks will be in my car.

I like to keep either a bag of Moon Cheese or a couple of Epic Bars in my glove box because they're both filling and filled with protein, without the sugar to make me even hangrier 10 minutes later. When I'm still at the light. They're also relatively un-messy, though a nugget of Moon Cheese does get away from me often enough that I'm pretty sure I have a celestial colony forming under my seat.

Being stuck in the car thirsty is at least as bad, if not worse, than being stuck in there hungry. I've repeatedly praised Embrava's water bottle as being the best ever (you can read more about why here) but when it comes to stuff to keep in your car, I'd recommend either the Embrava 18-ounce bottle, or a different brand's 1L style that has a nipple cap for drinking.

Embrava's 32-ounce bottle is a little narrow and tall for my car, the former causing it to rattle around in the cup holder, and the latter causing it to knock against the ceiling, sometimes dumping water all over me through its fast-sip spout, when I tilt it up to drink.

Note: Car Pool to be used with a separate, disposable water bottle, not the reusable one mentioned above.

In other words, the World's Most Portable Toilet for Men has its place, and could be another road trip essential for you.

I have - no, my car has - a slight issue with the dome light turning on at the slightest bump of it. It usually happens when I'm getting out of the car, I have no idea it's happened, so I shut my door and head inside for hours and hours.

To date, the problem - with my car - has resulted in 3 dead batteries.

A portable jump starter / battery pack like the 600A / 18000mAh above has gotten it going again every time. While I don't need it often, I would probably sacrifice most other things on this list for it if I could pick just 2 or 3 to keep in my car.

Like many inventions, the Sidesip travel mug came about by accident. In this case though, it was a car accident. Clear View Cups LLC created the Sidesip, a mug whose sipping nozzle is an extension off the side of its lid, to help reduce distracted driving and maximize visibility after their dad was in a major collision as a result of another driver's sight-blocking travel mug.

If you check out the image on the right above, you can see the difference between a driver's view of the road when drinking from the center of a traditional insulated mug and the mouthpiece on the Sidesip. The Sidesip eliminates much of the massive blind spot otherwise formed by the mug's body as a driver tilts it to drink.

A Swiffer, or some sort of duster or microfiber cloth, is something I always tell myself I should keep in my car, but as of yet, have not purchased for glove box storage. While I'm not normally the tidying kind, when I get in my car on a sunny day and see the blanket of fuzz that's been growing across my entire front dash and console, it bugs the errant particulates out of me, and I always make a note to get the Swiffer from the laundry closet and come back down and dust it all off when I get home.

But then I get home, get inside, remember, and...the car is so far away.

Better to invest in a permanent car Swiffer. It's on my list.

The TwinkleBirds Car Air Purifier contains a built-in ionizer that, when plugged into your vehicle's outlet, cleans the air of odors and filters out allergens such as dust and pollens. Dander, bacteria, cig smoke, dirty gym socks, even that which Yo can't help but Quiero every now and then are drawn in and neutralized, with no additional fragrance left in their wake.

Don't want to greet the officer who just pulled you over for going 60 in a 40 with a giant hunk of spinach in your top tooth, do ya?

Keeping any old floss on hand will do for those combined stuck moments - you stuck in traffic, lunch stuck in your teeth - but the forthcoming CrossFloss would make an even cooler solution, since it would allow you to keep on truckin' as you dislodge the hangers on.

CrossFloss provides a hands-free flossing option with its little bird cage-looking tool, whose bars are the segments of floss. To use it you place the CrossFloss between a couple of teeth, and then roll it back and forth with your jaw, biting down enough to let the floss drop into the gaps. Check out more here.

Welp, we know what The Better Ice Scraper thinks of itself. No insecurity issues there. I guess that makes it an even better gift for teens - they can gain confidence from it at the same time they gain confidence in using...

Is this a real problem? Or rather, is it such a big deal? People using your driveway as a turnaround. Cars getting lost or going one street too far and pulling into 20' of your pavement to correct their mistake. Since...

I know most of you have heard of a radar detector*. Possibly you've used one before. Maybe you've even tried the original Fuzzbuster. But whether or not you're aware of how life (and wallet and license points) saving...

Mojipic is a voice-controlled emoji car display. Brothers Ilya and Igor Pashko designed the bumper sticker and decal alternative for drivers who don't just have something, but a lot of things, to say. You can change your...

BAGO - Glovebox Clip to Keep Bags Upright in the Car

Keep your to-go bags from to-going all over your car with BAGO, an adjustable clip that secures to your glovebox at one end, and a variety of takeout and grocery bags with a metal clamp at the other...

Your car comes ready to sssswipe the rain and fog off your front windshield, game to sssswipe it off the back, but what about the vissssibility and blind sssspots at your ssssides? ViperSwipers are poly-rubber strip side...

GasPods promise an average savings of $120 per car per year. So, no, applying the aerodynamic champions of fuel efficiency won't result in a bank account boon of exotic Asian vacation proportions...or even really Japanese...

Keep my eyes on the road? Whaaat? I haven't done that since, like, 1996. For a while I would clip my nails and text while driving to pass the time, but after all of those creepy PSAs came out I could hardly even type...

Rollin' like a...dandelion? Despite their flowery name and wispy connotation, Dandelion concept tires from NEXEN are big 'n' burly issues, built rugged enough to traverse just about any terrain. The low-maintenance, never-flat...

To everything turn, turn, turn. And by "everything" I mean tight driveways, and by "turn, turn, turn" I mean up to 360 degrees into and out of them, courtesy of Driveway Turntables. A genius, no joke, no exaggeration...

The consensus is that these Trac-Grabber traction blocks work terrific for some people and lousy for others. Level of success seems to be based on: type of car; usage scenario; and user skill and experience with getting...

Michelin's Uptis tires are an acronym for Unique Puncture-Proof Tire System. They aim to bring airless tires, and in turn safer, more reliable travel, to both private and commercial drivers by eliminating the dangers...