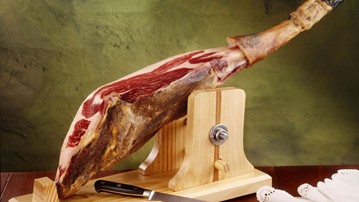 The gobble, gobble of the holiday season is in full swing! But if you would, take a quick pause from stuffing your own piehole to consider how you might win this year's gift exchange by stuffing the pieholes of others. I call it tasteful giving, and this list is all about food gifts. And while it contains neither corn nor fruit, I hope you'll find my collection of the best edible gifts to give for the holidays to be a cornucopia of fruitful ideas.

Gift prices are listed as they were at printing. Prices are subject to change.

I'm not sure I can wrap my head around the implications - the glorious, glorious implications - of what essentially amounts to the honey bear being left alone with the Sriracha rooster in a kitchen cabinet for too long. Bees Knees Honey is a chili-infused spicy honey that can sub in for anything from hot sauce to Hershey's Syrup.

If you're feeling generous this year, don't forgot to tell Santa and his reindeer to call on the truffle pigs, and grab a bottle or two of TRUFF's limited edition White Truffle Hot Sauce. Rare and available only seasonally, white truffles have a bigger, more richly umami flavor than their black cousins, which are the stars of TRUFF's flagship black truffle hot sauce.

Having been the joint giver / recipient of Neuhaus Chocolates' Winter Wonderland pop-up advent calendar last year, I can say with certainty (and praline and ganache all over my face) the Belgian chocolate brand makes one of the best advent calendars in the land. If you're looking for a last-minute gift idea, Neuhaus' other themed and non-themed chocolate boxes will deliver the same level of creativity and toothsome pleasure.

It's pumpkin spice on crack! No, not really. Just a whole helluva lot of caffeine. Pumpkin Spice Death Wish Coffee is the Death Wish brand's fall-appropriate seasonal offering, an effort to appeal to both the pumpkin-spice-obsessed and the sluggish, sleep-deprived masses. Like the original Death Wish Coffee, this edition is packed with twice the caffeine as your normal brewable beans, but also contains an infusion of the company's homemade aged chai spice and pumpkin essential oil blend. So it's kind of like Death Wish meets a warm and welcoming Mrs. Claus.

Milk & cookies for Santa served in an Ultimate Oreo Dunking Set? Uh...maybe he can have my sloppy seconds after I get my cookie-sloshin' game on.

Enjoy your O-R-E-Os stacked right handy on the S-I-D-E of your milk mug with this kid-gift-ready (and hungry-man-gift-ready) Oreo Mug Ultimate Dunking Gift Set. This listing comes with a single glass mug, an attachable cookie cage for piling up your Oreos, some red plastic tongs to assist in getting them back out of the stack, and a "starter set" of 3 x Oreo cookie pouches with 2 Oreos each.

If the sight of a Shiba Inu makes you just want to squishitsface, well, how about sparing the dog's dignity and ability to breathe, and taking out your cuteness aggression on a set of Shiba Inu Dog Marshmallows? Come on, you have to admit, they're just as adorable as the real thing.

And the marshmallow versions are filled with chocolate and sweet azuki bean flavors!

Carl, that's not snow, it's a pot of boiling milk. Yeah, Carl, I know it's pretty and white, but it's hot. Hot, Carl. And you're a chocolate snowman. Get near that thing and you'll...Carl! Carl, no! Car-Caaaarrrrllll!

Now here's a festive winter treat for you and the kids. For everyone who loves hot chocolate, and is OK with committing snowman homicide, Kate Weiser Chocolate brings you Carl the Drinking Chocolate Snowman. Each handsome Carl is made of a dark chocolate shell filled with hot cocoa mix and mini marshmallows.

"Tastes good on everything!" Normally when a condiment makes such a claim I'm skeptical, but this condiment is Momofuku Ssam Sauce. Made by chef David Chang, founder of the Momofuku Korean-inspired restaurants, and really a whole culinary brand, this is some Momofuk-in' ssam good stuff. It really does taste good on everything. Meat. Rice. Ramen. Eggs. Pizza. The palm of your hand.

The base of Momofuku Ssam Sauce is Korean gochujang, a savory-sweet chili paste of varying degrees of heat. You can get your Chang-kissed ssam sauce in Original, Smoky, or Spicy flavors. Additional ingredients include soy sauce, rice wine vinegar, miso paste, and mushroom powder.

A cocktail that tastes like a campfire? Nah, Traeger doesn't go that far with their Smoked Simple Syrup. The mixer is infused with woody flavors more commonly found in your food and drinks - clove and vanilla. And rather than turning your cocktails into liquid smoke, Traeger intends their simple syrup to enhance ciders, Arnold Palmers, Old Fashioneds, or other drinks you might pair with a wood-fired meal.

Pork perfection ain't cheap. This side of acorn fed 100% Iberico de Bellota Ham weighs in at 16 to 18 pounds of pure cured meat delight. As with most large-scale Iberico Ham purchases, this piggy buddy also comes with a wood and stainless steel ham holder and knife, both doubling as utilitarian slicing wingmen and crowd-pleasing display pieces.

They say this 3-pack of "100% original" space food is the same used by the Russian Space Agency Roskosmos, and it's delivered directly from Russia. Dishes include the famous Russian beet soup Borscht...in paste form, Pork with Vegetables...pulverized to a paste, and Cottage Cheese with Blackcurrant Puree...all pasted and ready to suckle like the milk of your mama.

You have stumbled upon the end of a rainbow. Jack. Pot. Your days of spending 15 minutes crouched over the cereal bowl picking out all the boring healthy brown bits from Lucky Charms are about to be as over as Aaron Rodgers' glory years.

Each real glass jar of Nutella for One contains 0.88 ounces of the Italian-made good stuff. Pack them in lunches, set them out for parties, give them as gifts, or just sleep with one under you pillow at night in case you have a bad dream and need a choco-nut hug to console you.

In theory, buying The Dirty Cookie's Cookie Shots is way more expensive than buying a Milk & Cookie Shot Maker and baking the chocolate-lined cow-juice-and-booze-slingin' treats yourself. But remember, time is money. And in my case, frustration and smashing a Milk & Cookie Shot Maker on the floor when it doesn't make perfect chocolate chip Baileys reservoirs like I told it to are money too. Ultimately, probably more money than a set of The Dirty Cookie's pre-made Cookie Shots.

I don't know much, but I do know that I would like some duck fat french fries. Yes please, Baby Jesus! A coupla spiralized russets, a sturdy saucepan, a big, fat wad of Fatworks kettle-rendered quack fat, and I don't even need to go to the Belgian frites place and pay $8 to get them.

8-ounce jars of Duck Fat are just one of your choices in Fatworks' line of animal fats for cooking. Committed to ending what they consider an unmerited war on fat, the self-described "Fattitude Adjusters" at Fatworks also produce oils including Beef Tallow, Pasture Raised Lard, Leaf Lard, Chicken Fat, Lamb Tallow, and Goose Fat.

My 19-course collection of food gifts for 2021 isn't just a meal of highfalutin foods for foodies, it's a meal of things that make you go Mmm even if you're just a normal human being who likes to consume food. Or cook...

Bomb shelter? Underground fort? Not really. But Dutch designer Floris Schoonderbeek's Groundfridge is big enough for me to pop a squat inside and go all Jabba the Hutt chowing down on the 1,100 pounds food and drink she...

I am 0% surprised that someone made a 3D food printer. If we can print jewelry and home decor and machine parts and sugar, why shouldn't we be able to print dinner? Barcelona-based company Natural Machines has created...

The Imperial Spherificator. Sounds like something you'd find alongside Mega Maid in Lord Dark Helmet's cache of planet-destroying weapons. But in fact, this superbly named device isn't meant for destruction or Mel Brooks...

Natural Harvest: A Collection of Semen-Based Recipes by Paul "Fotie" Photenhauer serves as a reminder to be careful what you wish for. For example, if a dude asks what you want for dessert, consider a plate of Creamy...

14 Must Have Eats While Under Quarantine

It's not that these 14 must have eats while under quarantine are any less delectable and covetable when we're not sheltering in place, it's just that building the Best Pantry Ever of snacks and candy, and a munchie- and...

Nobody describes a pair of multi-tasking snacking chopsticks better than Snactiv themselves: "A completely unnecessary but very cool snacking tool." And it doesn't stop there. Snactiv continues, in words after my very...

Nary a week goes by that I don't hear about how my friend DeAndre just wishes they made a dog food for humans. Something containing all necessary nutrients, adequate calories, and appropriate protein:carb:fat ratios that...

And I thought a Costco-sized can of baked beans was big. The stock-up store's contributions to hunger management have always been supersized, so it should come as no surprise that their idea of an emergency preparedness...

What to Eat Food Dice

Hey, it's a food die for a foodie! OK, maybe more like indecisive takeout junkies. What To Eat Food Dice are oversized wooden cubes whose 6 sides each contain the image and name of a different type of cuisine carved into...