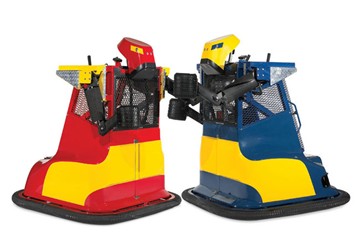 $17k
from Hammacher Schlemmer »
Check It Out

How many times have you been THIS CLOSE to punching someone in the face, only to be thwarted by interfering friends, the possibility of assault charges, or the sad realization that the would-be recipient could snap your neck with his thumb and forefinger? Bionic Bopper Cars level the playing field, allowing just about anyone to make, and make good on, threats to kick the assess of those who piss them off. They're Sumo-sized robots, clocking in at over 6 feet tall and 5 feet wide, with steel bodies, tire-tread fists, and Honda engines the give them mobility of up to 3 mph in any direction. Best of all, the prize fighters aren't even remote controlled--operators actually sit inside their chest cavities and use a joystick to wallop opponents with upper cuts. Each blow to the head scores one point, awarded and tracked automatically on a front-mounted display. And even though they each cost a year's worth of college tuition, the satisfaction of decimating the Apollo Creeds, Lucys, Ace Merrills, Tom Buchanans, ugly stepsisters, Gordon Ramsays, Wayne Arnolds, Chet Donnellys, NeNe Leakeses, and Biff Tannens of the world will prove to be worth far more to your future than a BA in Psychology. Also, a $17,000 robot to do your bidding is still cheaper than post-altercation maxillofacial surgery.

Me: One 13-foot-tall, 9,920-pound menacing robot that I can either ride and pilot with mere hand and body gestures from a cockpit, or control remotely with my 3G connection, please...

My theory is that this might actually be Optimus Prime and this guy has captured him, found some way of disarming him, and is now trying to sell him. I don't know if I'd be comfortable sleeping with this guy roaming around...

JP Rishea masterminds a legion of sick conglomerations of metal and power, but the Exo-Gauntlet is probably his most irrationally needful of them all. I guess one could technically argue that it has a few practical applications...

Fidget toy meets self defense weapon in the TOYOGE Knuckle Duster. Even when you're wearing it, with its bright white-and-black carbon plastic composition, and funky shape covered in textures and imprinted accents, the...

Designing the Yardroid to look like a mini tank is pretty much all they needed to do to make me want this smart landscaping robot. But Yardroid takes the whole robotic lawn mower concept, like, 8 steps further with both...

It may not muster the technological sophistication of the Kuratas rideable battle mech, but I'd still rather have Dustin Kiska's Aliens Caterpillar P-5000 Power Loader replica because Kiska built all 200 pounds of it...

The Labrador Retriever isn't here to oust your dog and become your new best friend, but the assistive robot does hope to become another kind of indispensable companion in your life, or the life of someone you know who...

When I transform into a paper-product-based Optimus Prime, I like to take on a more active role in the process than lifting my giant cardboard robot arms out of a giant cardboard box. So thanks be to Chuck Norris that...

Sorry to all the Veruca Salts out there, but you can't have a Ripsaw M5 Robotic Combat Vehicle or an Oompa Loompa. Willy Wonka and the US Military say no...