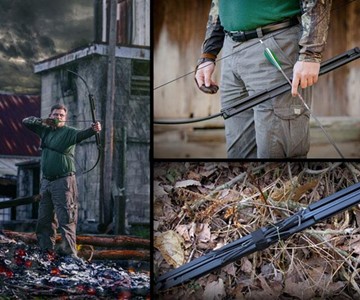 The Compact Folding Survival Bow, or CFSB-1 for the acronym happy (I think the "1" indicates it's #1 in the world, like America or Megan Fox in a Supergirl outfit), is a patent-pending one-piece takedown bow milled from T-6 6061 aircraft grade aluminum and fitted with fiberglass bow limbs. According to vendor Primal Gear the long bow that bends and tucks into a 23" short riser is the only folding bow on the market designed with survival in mind.

CFSB-1s have removable limbs for easy replacement, interchangeability with different draw weights, and so that the bow converts quickly from right- to left-handed use. The included limbs have draw weights as follows: 47 pounds at 26"; 52 pounds at 27"; and 55 pounds at 28". Arrows fire at average speeds of 181 feet per second.

When open, the Compact Folding Survival Bow extends 59" long. It weighs just 2.25 pounds for carrying in/strapping to most any pack or bug out bag. According to Primal Gear, this bow is built to "survive the apocalypse, put food on the table, and defend you when you need a silent and powerful self defense weapon." Provided, that is, you know how to hold, aim, and fire a bow.

Muchas danke to Dakota B. for the Dude Product Tip.

Stealth. Stamina. Sniper sight. And that's just the M4 Tactical Crossbow itself. Like, before taking into account the litany of powerful, valiant, not-to-be-F'd-with characteristics Cornelius and I will bring to the table...

Rattlin' Randy Riffenburgh owns the dual titles of Falcon Slingbow Creator and Falcon Slingbow Sniper. He developed the patent-pending, arrow-shooting slingshot for hunting, fishing, and target shooting. And he reigns...

If you're a big game hunter living in Arizona*, you are Crosman Golden. It's the only state in the US where there's a season for pursuing just about every species of big game on the Crosman docket with the company's forthcoming...

I finally hunted down* Barnett's Penetrator Crossbow in response to reader disgruntlement over the discontinuation of the M4 Tactical Crossbow. Admittedly, this substitute is no LeBron - it lacks the red dot sight, LED...

Mr. Stay Puft's got nothing on my Mallow Bow. Sure, he can stomp on people, toss cars, and tear down buildings, but I can dole out cavities, high blood sugar, and toothaches. Straight to the kisser from 60' away!...

Archers, bowhunters, bowfishers, people who like to sling mud get one tool for all their firing needs in The Hammer. This slingshot /slingbow invites sportsmen to practice multiple shooting disciplines using its adjustable...

The Delta is part of William Tell's collection of concept bows. A bow-crossbow combo, it maintains the lightness and portability of a manual bow, but adds a draw holding device and 5-pin sight and laser sight for crossbow-style...

Well here's one way for mountain bikers to take out the competition during races. Can't beat 'em with speed and skillful maneuvering? No problem. Just haul out your crossbow from the scabbard on Cogburn's CB4 hunting...

Reader James S. wrote in recommending the NcStar Crossbow for its value and proficiency. Specifically, he says, "I picked one of these up back in March and it's awesome. Inexpensive and you certainly can take out little...

The dude in your office who always says to Ping me, brah! when that copy's done. When you're getting coffee? When it's time for Friday Feats of Strength in the conference room? Oh, it's time to ping him, brah!...