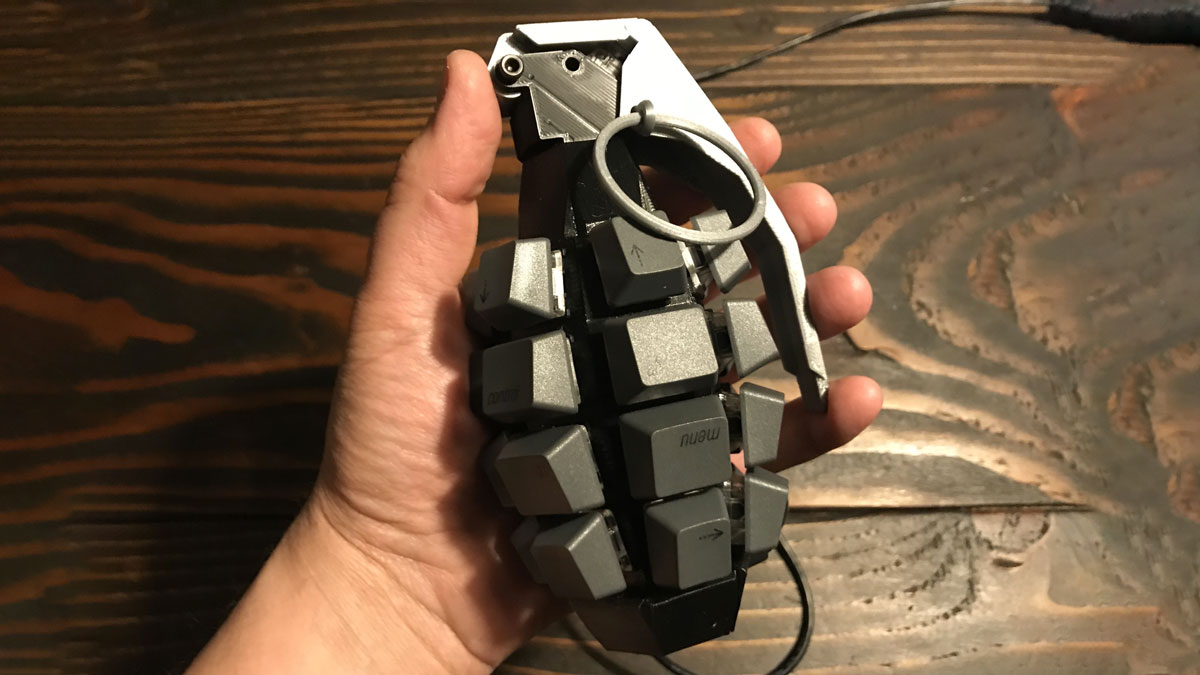 It's not that words haven't always been weapons, but this Pineapple Grenade Keyboard depicts how much easier, and deadlier, it is to use them as such today. The 25-key handheld typing companion is a fine manifestation of what happens when we fire off thoughtless comments and sentiments, unproven statements and research, and information whose only certainty is that it's going to get clicks and rile people up: a QWERTY explosion.

Indeed Pineapple Grenade Keyboard creator, Dan Bostian, pursued the idea as "an exploration of the theme Information as a Weapon." It's a follow-up to his other novelty keyboard, the F-Bomb. And while the overarching message of both is pretty dour and dystopian, they keyboards themselves are wicked. Like I said, the Pineapple Grenade Keyboard has 25 keys, 24 of which wrap around its body to form the iconic pineapple shape, and a decidedly unergonomic and impractical typing surface.

And the 25th key? I feel like that should be the "Send" button. It's a switch in the top of the grenade. Pull the pin and squeeze the lever, and you'll chuck whatever you've written into the digital landscape. BOOM!

The Pineapple Grenade Keyboard isn't available for purchase, but if you want to create your own Bostian has provided the files for 3D printing and building one on GitHub.

Pull the pin and Rocky S2V's Survival Grenade blows up a cornucopia of Mountain Shepherd Wilderness Survival School tools for the outdoor conquistador. Enveloped in 10' of military grade 550 paracord are everything from...

Pull the pin and let the propane do the rest. When Airsoft's Tornado Impact Grenades detonate, they scatter over 200 plastic 6mm pellets in all 3 dimensions under which your enemies might try to take cover. This means...

Maybe you'd rather your 6-pack attack come from the real one--the M-32 multiple grenade launcher Mach Machowicz once demoed on Future Weapons--but you'll probably get yourself into a lot less trouble with the po and your...

Surfers, SCUBA divers, mermaids, and baby seals now have a means of deterring the Ultimate Dread. Thwarting the very reason some break a sweat at the mere mention of the ocean. These here grenades contain a highly calibrated...

It's the Friendly Swede! With sharp eye knife! The Friendly Swede has added a 2" stainless steel eye knife to its survival grenades. The small, yet practical kits each consist of a carabiner clipped to a knife's jutting...

As a Platoon Leader in Ft. Carson, CO, Garrett Coker made a bet with a buddy on who would nab the higher Gunnery score. The winner would receive a bottle of Scotch. Coker won. He saw his buddy again a few years later...

When I saw this "Complaint Department" sign with a "Please take a number" directive pointing right at the pin of a grenade, I first assumed it was meant for the office. I know my boss would sure like to have one...

It's kind of funny because if you pull the pin...well, in this case the whole grenade...the tire will, well, not explode, but sort of implode as it loses air. Though I guess just removing the valve cap doesn't exactly...

To me, the idea of smelling like a bomb of anything connotes an unpleasantly strong and cloying odor, and when I think of a bomb of spices all that comes to mind are the scents that permeate my clothes, my hair, my skin...

I knew with a little help from the Internet it wouldn't take long to find an answer to my question of what am I going to do with all of the grenades I stockpiled in anticipation of the end of the world that did not happen...