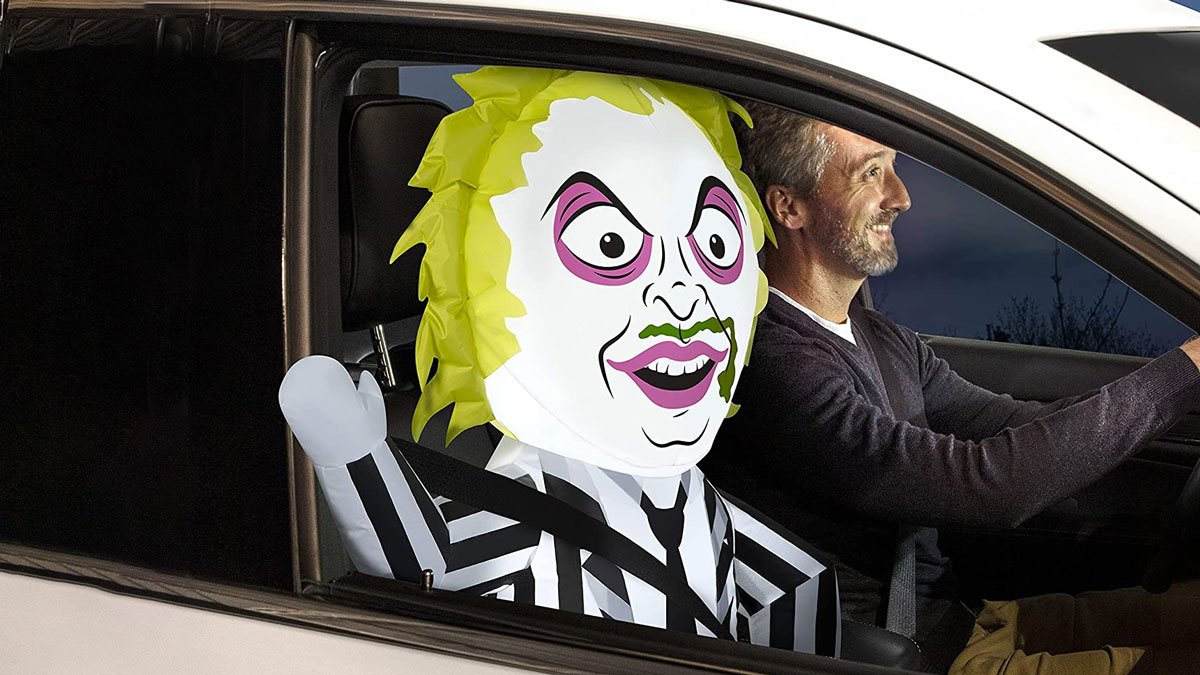 While I appreciate the idea of a Beetlejuice Inflatable Car Buddy, looking at this Beetlejuice Inflatable Car Buddy from Gemmy makes me wonder: What the Otho Fenlock is that amoebic green half-horseshoe snot mustache running across his lip, and down one side of his face? I mean, I know the Beetlejuice in the movie had patches of, like, green mold on his face, but it was patches. Patches. Plural. Spread over his whole head and neck. Here we have a Beetlejuice with a single, inexplicable trail of...something...that somehow looks even more revolting than the death and decay growing all over Michael Keaton.

And don't worry, lonely drivers, after Halloween is over, you can always replace your Beetlejuice Inflatable Car Buddy for a Grinch version.

I've been walking by a 10' Animated Beetlejuice Sandworm every day for the last 2 weeks, courtesy of the best neighbor ever who installed one in his front yard, alongside this 6' inflatable black cat with rotating head...

Handbook for the Recently Deceased

This Handbook for the Recently Deceased contains 220 blank pages. I don't know if that's better or worse than Adam and Barbara Maitland's gibberish-filled version. Perhaps better, as at least buyers can fill this one...

According to the Handbook for the Recently Deceased, the Beetlejuice Terrarium is an accurately-depicted scale model of the Maitland-Deetz estate, replete with fence posts, dirt driveway, the foreboding, Burton-esque...

I can't think of a better way to greet my guests, guard my house, and make myself feel perpetually on the brink of getting the shit kicked out of me than the mounted head of Christopher Walken. The most disturbing former...

This Alien Statue from Area 51 is pretty much life-size (I mean, aliens seem pretty short, right) at 5 feet tall, and glows outer-space-radioactive green in the dark, so it's obviously a choice pick for anyone getting...

My mama's gonna dig adding these Zombie Kids to her front yard when she decorates for Halloween this year. I'll be a fan of them too if they scare away some of her trick-or-treaters, thus creating more leftover candy...

Wise shoppers know that when buying a gift, you should choose something for the recipient that you would never choose to buy for yourself. In that vein, this smokin' hot, 12-gauge clear plastic TRON corset lined with...

Cartoons and reality have met, merged, and are now calling out to your carn(iv)al sensibilities. Sinister, hard-edged, Brooklyn-tongued Harley Quinn makes the likes of animated wet dreams Jessica Rabbit and Holli Wood...

It's The Brotherhood of Evil Mutants' most famous defector in living, non-Anna-Paquin form! This milliskin Rogue jumpsuit is made to order in your choice of kotobukiya with green details, classic with black details, and...