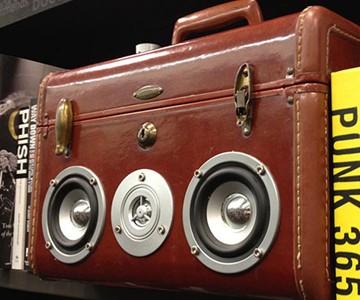 What's this? A circa 1968 suitcase and a set of Sony speakers turned into a portable stereo? Aw, Granny, good job! You made a ghetto blaster! And I thought our Merle Haggard Mondays and Tupac Tuesdays couldn't get any better.

DomeCandy's handmade boomboxes began as a marriage between suitcases and sound systems, but have since evolved to include hollow storage devices of all kinds. Guitar cases, briefcases, crates, cigar boxes, you name it, and they'll amp it up. Sometimes with a 100W Class D power model, sometimes with a 25W model less likely to wake the Richter scale, and more suitable for a tabletop. In fact, DomeCandy's ultimate vision isn't just to outfit music fanatics with one-of-a-kind boomboxes that deliver peak sound quality and withstand rocking out for more than a couple of years, but to equip them with the knowledge and creative outlet to design and build those boomboxes themselves.

Though still a work in progress, DomeCandy hopes to have The Recipe ready for sharing over the next year. It will be a database of what they have learned about designing and creating boomboxes, with guidance for anyone with a DIY inclination to make their own, and a forum for spec sharing and discussion. DomeCandy currently operates as a retailer, but is working towards becoming an academic institution of sound. They say, "We don’t want to build and sell 600 boomboxes, we want 600,000 people to build their own."

Until that goal is reached, though, you can still buy some pretty sick pre-made suitcase boomboxes from the DomeCandy lab. Pricing typically increases with stereo size and power output. All installed amps are Class D and batteries are rechargeable 12V sealed lead acid that last from 8 to 12 hours. Suitcases are stolen from luggage carousels 4, 5, and 6 at the Tampa International airport.

McIntosh has a swell idea for drowning out the sound of too much time at home with the fam: a vacuum. Actually, 4 vacuums - the pairs of 12AT7 and 12BH7A dual triode vacuum tubes that power their MHA200 Headphone Amplifier...

From small and simple portable music players made with athletes and workouts in mind, to mildly evolved MP3 players suited to those who still thumb their noses at smartphones, to the audiophile ear candy that are high-end...

I was just chugging along, typical hump day, when...BOOM!(box). It happened. I saw this RC M90 Boombox Candle from cent.ldn, and my week instantly became a little more fly. A little more bangin'. A little more LL Cool...

The Dash is a set of wireless in-ear headphones. It's also a self-contained MP3 player. And a Bluetooth headset. A microphone. A USB stick. A heart rate monitor, fitness tracker, sports watch. It has the capabilities...

Whether you pride yourself on your extensive vinyl collection, have a particularly snazzy record you want to show off, or just think a vertical turntable would look sweet in your media room, Gramovox's Floating Record...

The mysterious Alex of Boston, MA says he's an inventor who is shy to share his inventions. But someone found at least one of them, the SIO Musical Pillow Sheet, because today Alex has been inundated with over 700 inquiries...

SoundFloat water loungers are bluetooth-enabled and come with built-in 20 watt speakers, plus 70mm embedded subwoofers. Wherever you may float, ocean, lake, or backyard pool, you'll be sure to hear all your favorite music...

The Duo Deck is your portable purveyor of the sounds of classic vinyl and the mix tapes filled with love songs you wrote for Samantha Nester in the 9th grade, which she threw back at you through your open Toyota Tercel...