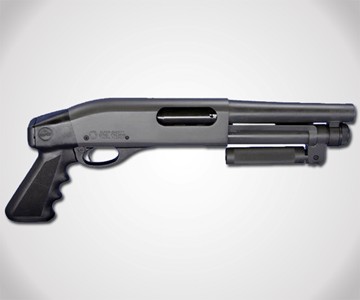 The Super Shorty Shotgun is based on a Mossberg Maverick 12-gauge, and, at an additional cost, is also available in models Mossberg 500, Remington 870, and Lil' Kim. Factory-fabricated with a pistol grip, the Super Shorty is a member of the AOW category and, thusly, comes with an attached Federal Transfer tax of a mere Abe Lincoln (he's the one on the fiver, the one who hunted vampers, right?) Speaking of hunting nonexistent creatures from fantasy TV shows and feature films, we understand from the Zombie Panic Wiki that this chubby little shotgun, which holds two 2 3/4" or 3" shells in its magazine, and one in its chamber, also makes for a zombie assassinator of Die Hard-dramatic proportions during a one-on-one standoff. (If live bait is scarce, zombie-hatin' gun toters can fire their Shorty away at Tactical Bleeding Zombie Targets).

Overall length of the shortest 12-gauge pump shotgun available is 16.5", with a barrel measuring in at 6.5". The Super Shorty also has a spring-locked foregrip that pivots out of the way when not in use to further compact the chubby little gun. Serbu Firearms manufactures all parts of the weapon in-house on CNC machinery. Welds are done by the TIG process, and the manganese phosphate finish is MIL-spec. Check out the video for proof that that gun fires when loaded and triggered.

"Don't leave civilization without one." It's the motto of the US Survival AR-7, a semi-automatic portable rifle that weighs a mere 3-1/2 pounds and measures in at 16-1/2" long when broken down and stowed in its waterproof...

You look at the replica M41A Pulse Rifle from Aliens, its fully adjustable metal stock and removable magazine, and wonder, Is it real? It looks real. It's the right shape. It's...huge...definitely the right size. It moves...

If you're looking to stab someone in the back, knife them in the heart, or just royally screw them over, Microtech's MCT1057 Jagdkommando fixed blade knife is the definitive way to do it. A version of the manufacturer's...

What the WTF Amazon? You're in the weapons trade now? These costume-y looking hand claws have real blades of razor-sharp, 10"carbon steel, which make them exponentially and disturbingly more portentous than actual claws...

The World's Most Powerful Laser

If bat shit looked like 1000mW of ice-blue lightning, the S3 Spyder III Arctic Laser would be the physical manifestation of bat shit crazy. As it stands, the world's most powerful laser is just fuckin' nuts. Wicked Lasers'...

I don't know how to shoot a gun, or really even how to hold a gun without soiling my pants, but I bet if someone put one gun in my hands and another to my head and demanded I use the former to fire at a watermelon dangling...

Last time me and my friend Cornelius played paintball he kept getting nailed and hiding and whining like a little goat until finally everyone was like, Dude, you need to grow a pair! And he was all, Dude! It's not me...

Lorenzo Maggiore already figured out how to A-Salt bugs in an effort keep our extermination of insects simple, clean, and green. Now we have a means of SALTing humans, this time in an effort to keep our defense against...

This, unbelievably, is exactly what the name suggests, a mini desktop cannon that fires standard BBs. And, it's pretty damn cool. You really need to watch the video to see it in action. I'm certain this will be used for...