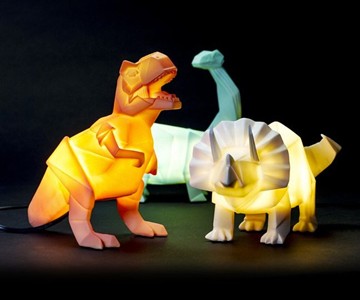 Holy extinct species, Batman! Is that a Diplodocus on your nightstand, or have you just been shopping at Toys in Babeland again? Dino Lamps ignite the night, and all the dark crevices of your living space (except those dark crevices, Batman) in stylized, origami-ish versions of the 3 finest dinosaurs ever to tromp the earth. Triceratops, Diplodocus (whatever, I learned about dinosaurs in the 80s; it's a Brontosaurus), and T-Rex.

Dino Lamps are LED-bulb-lit with energy efficiency and no known predators, except meteor strikes that cause power outages. Their major downside, my fellow Americans, is that T-Tops, D-Docus, and T-Rex all come with UK plugs. Hey, I don't want to hear about it. Why are you reading about dinosaur night lights right now anyway? It's the weekend. It's September. Get off the internet and go rake some leaves.

While the Lugos multifunctional indoor / outdoor cordless fan is mildly interesting, it is nowhere near as interesting as the tent pictured behind it in the promo photos and video. Can you see what I see printed on that...

Now here's a lamp that really bridges the gap between art and functional lighting. Mark Mitchell's Bridge Lamp will obviously look outstanding running across your desktop or work table. But the designer says it will also...

When I first saw this Motorized Inflatable T-Rex Ride-On Pool Float I thought all my dreams had come true. T-Rex. Pool float. Able to tool around the water via joystick and zero effort on my part...

I wouldn't go so far as to call HID SIPS' Water Dispensing Lamp genius, but I do think it rises above both the useless gadget and unnecessary invention categories. And while I usually keep my bedtime water in the bathroom...

You can use the T-Rex Candy Dish & Valet Tray to hold your keys, coins, jewelry, or small pieces of EDC, but what the little dino really wants to keep contained and organized for you is a bag of M&Ms or Skittles. Some...

I really appreciate how un-stuffy and...cheeky the Brits' sense of humor is. Sorry, humour. For example, I'd like to give whomever created this lamp a big slap on the back to show my admiration. And then a big approving...

The T-Rex, Dragon, and Swamp Monster Enviroskulls might eat you, but at least you can rest assured they're not here to destroy the planet. Enviroskulls is a nonprofit, non-commercial organization that creates dazzling...

Meet the Starkiller, here to make you the star of a killer party...especially if you're hosting a bunch of Star Wars fans. The lamp and liquor dispenser from Rustic Design features industrial pipes, metal hardware, and...