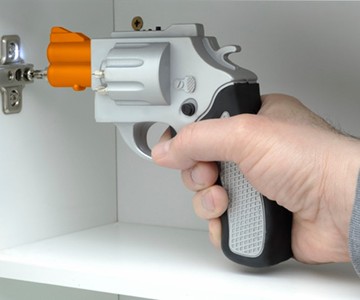 Sold Out from Amazon »
Check It Out

A Drill Gun Power Screwdriver. That's kind of ridiculous. I want one. I'd be like part Bob Villa and part James Bond. Or part Tim "the Tool Man" Taylor and part Super Trooper. Or part Dwayne Schneider (you young'uns will just have to look that one up) and part Chuck Norris.

Haha, just kidding. Chuck Norris screws and unscrews things with his mind. Right, ladies? Ain't no illegitimate children on Chuck Norris' bank roll. Which reminds me of a joke: What's the difference between a pregnant woman and a light bulb?

You can't unscrew a light bulb.

Unless you're Chuck Norris.

But back to this Drill Gun, a cordless, rechargeable power screwdriver that's shaped like a revolver, thus combining two of man's favorite endeavors in life: tinkering with things and shooting them up. The screwdriver comes with 6 bits, one of which loads at the end of the gun's barrel, and the other 5 of which chill in its chambers until called upon. The screwdriver applies 3.6 volts and 3 N.m of torque at 180 RPMs to your most rickety cabinet hinges and ornery IKEA furniture. An AC adapter for charger is also included.

iFu calls the design of their Mini Electric Screwdriver "exquisite," and while I think that word should be reserved for old wines and revenge tactics, I will concede the aluminum alloy metal shell, one-piece molding...

The Blackout Original Hardcore Hammer 2.0 is hammer that's black. All black. Matte black. That's it. Not much to see here. Especially if it's dark and you need to find your hammer...

The screwy thing about this ring is...literal. And only literal, because the Screwdriver Ring isn't weird or messed up at all. It's awesome!...

I never thought "short" and "stubby," especially used side-by-side, could be such a compliment. But the Short Stubby Screwdriver from Gato Tools is a double-ended, rotund-centered beauty I'd screw with in a second. And...

Though he'll probably stick with Mjolnir for wailing on Loki, if Thor were a construction worker I bet he would use one of Wilton's BASH Unbreakable Sledge Hammers. Touted the toughest sledge ever built, BASHes with heads...

The real best credit card multi-tool would be the one that finds the money to pay off all my credit cards for me. And then makes me a sandwich. But since smart tech and AI startups are still working to develop that particular...

Where there's muck, there's brass. Plastic muck, and Oceanus Brass, to be specific. The Oceanus Brass Cablelaid is a cordage tool and on-demand recycling companion that breaks down plastic bottle waste into yards and...

Kinkajou. The word sounds like it applies to a precocious, yet cuddly, mammalian sidekick that sits on your shoulder and surreptitiously swipes peoples' two-bite brownies and tubes of lip gloss during walks through the...

I'd screw that. I mean, with that, I'd screw with that. The Fanttik Mini Electric Screwdriver Set is a rechargeable pen-sized screwdriver that can screw electrically with a high and low torque of 0.2/0.05N.m, or screw...

Utilitarian cosplay. How many occasions do you have to use those two words together in a sentence? (And can you say them 5 times fast?) Ever since I got the ix-nay on wearing my "formal and "functional" Mongol armor suit...