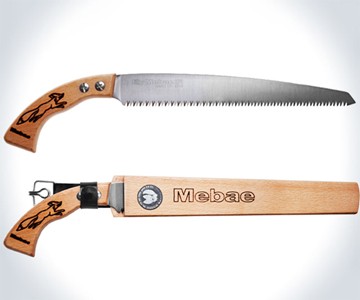 $62
from Kaufman Mercantile »
Check It Out

So the official name of this serrated slasher is Japanese Pruning Saw, but I think that's just because online marketplaces whose customer bases are mostly over-compensated, uninformed hipsters and yuppies want to subtly prepare and arm them for the zombie apocalypse. You know, without making them wet their pants. Thus, instead of calling a duck and duck, and an implement intended for the hacking up and disposal of zombie corpses a Zombie Disposal Saw, the saw appears under the guise of a garden tool--a "more elegant alternative to a chainsaw"--primed for trimming cypress hedges, cutting away unruly vines, and sculpting equestrian-themed topiaries.

Regardless of nomenclature, both those who know what it's for and those who need to kid themselves alike will appreciate the Japanese saw's smooth curves and easy feel--a design reminiscent of an antique pistol. Aesthetic admiration segues into respect, as wielders absorb the whittled chrome blade's eighty taper-ground teeth, ready to gnash through backyard encroachers (walking dead) in the form of everything from bark (putrefied flesh) to bamboo (diseased, yet surprisingly difficult to penetrate bone). Like most Japanese saws, this incarnation cuts on the pull stroke to ensure maximal control. Particularly when pruning branches above the shoulder (dismembering zombie test subject hanging high in the laboratory).

When not in use the saw resides in a beechwood sheath with a snap button clasp, and includes a belt clip for waistline attachment and easy transitions between saw, machete, clippers, and shovel.

Saws hail from Miki, a city in Hyogo Prefecture, Japan with a 200-year tradition of blacksmithing and kinfesmithing. The company responsible for this blade has been forging dangerously sharp objects since 1919. Saw blades are machine made 11.8" long with 8 teeth per 1.2", but pieced together manually into offensive instruments 16.25" in length (18" with scabbard). The saws have protective coatings to prevent rust, and handle wood is finished with a moisture seal.

You look at the replica M41A Pulse Rifle from Aliens, its fully adjustable metal stock and removable magazine, and wonder, Is it real? It looks real. It's the right shape. It's...huge...definitely the right size. It moves...

I don't know how to shoot a gun, or really even how to hold a gun without soiling my pants, but I bet if someone put one gun in my hands and another to my head and demanded I use the former to fire at a watermelon dangling...

The BLACK+DECKER Cordless Drill Combo Kit is new or particularly fancy, but it does have a new and particularly fancy price from Amazon Prime Day. You'll save around $89 if you're a Prime member who grabs this 4-piece...

OK, zombiologists, conspiracy theorists, slaves to sci-fi, and keepers of the Boy Scout motto, it's time to put your $24,000 where your mouth is. OpticsPlanet has assembled a stunning and formidable sprawl of zombie apocalypse...

Since The Walking Dead started again, I've been thinking I need a new zombie-decimating weapon for use in my daydreams about stuffing them with bullets and hacking off their heads. Melee Mods' Tact-Axe and Gatchet should...

The WASP weapon accessory is an add-on for your existing 9mm pistol that converts it into a less-lethal self defense option for a single round. The WASP impact baton fits into the gun's barrel and, when fired, shoots...