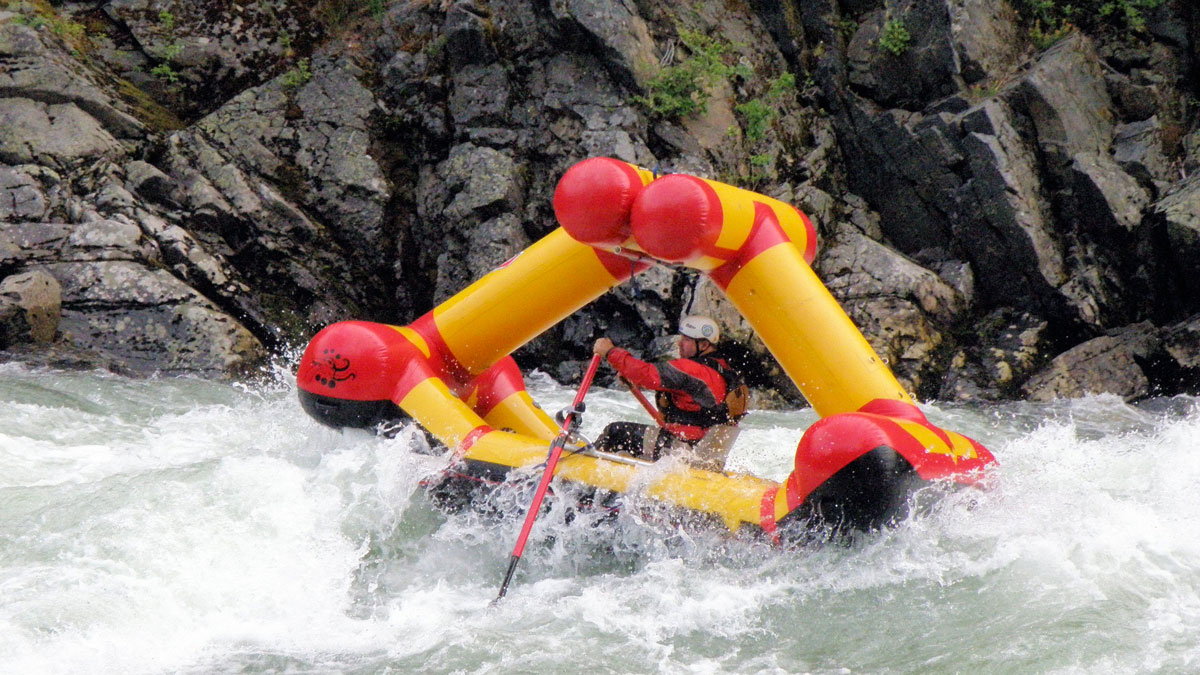 Battling whitewater rapids is fun, but being on the losing end of that battle, not so much. Creature Craft owner and creator Darren Vancil developed his self-righting whitewater rafts to level up the adrenaline rush of running rapids for all levels of rafters.

Creature Crafts are Vancil's combination of Siberian Bublik rafts and catarafts. They have a cage-like exterior with multiple chambers that keep the rafts firm, no crushing or wrapping, during use. Inside Creature Crafts rafters lock in with a patented thigh-strap system, which could be Bad News Bears under normal flipping circumstances, but the Creature Craft's ultimate characteristic is its ability to self-right after getting twisted, battered, and knocked upside down.

Creature Crafts are made such that paddle teams and oars people, regardless of their experience level, should be able to roll the raft upright after a tumble, and continue on unphased. In that sense, Creature Crafts make whitewater rafting more accessible and safer for beginners, and give more experienced river runners some peace of mind on advanced category rapids.

Creature Craft come in a handful of different models and sizes, both with and without motorized outboards. The company also has a line of Creature Craft rescue boats.

I'm probably not the best dude to talk about the STAR Slice Paddle Cataraft, as I don't really care for white water rafting, or rapids, or, like, water. It's not that I'm afraid of water, per se. I welcome it, for example...

No need to weigh down or cramp up your kayak or paddleboard with a cooler when you can raft a CreekKooler to the back and paddle on with up to 30, 12-ounce cans and 20 pounds of ice in tow...

If you want to pack a raft on your next adventure, you're going to have to get rid of something to make more room. Here, how about this roll of paper towels? Kokopelli's Rogue-lite Packraft, the newest and lightest in...

Dudes, do not fill your YETI Panga duffel with ice and beer. Airtight, waterproof, and submersible, the Panga series is YETI's "first non-insulated piece of gear that lives up to the standard of being built for the wild."...

Fluzzle Tubes, now these are the kind of hookups everyone will enjoy. The interlocking float tubes have traditional tubular center butt holes, with mesh supports on the bottom, and backrests for comfort. But rather than...

We've seen tents in the trees, so why not tents on the water? The Shoal tent combines the floating fun of an inflatable raft with the after hours coverage of a sealed, waterproof canopy. That I sure hope is stronger than...

The Fly. Craft. Stealth. A name suitable for a helicar. A personal spaceship. An...inflatable fishing raft. Flycraft's Stealth is an easy-to-transport, easy-to maneuver solo or dos-man fishing boat. Despite its collapsible...

If you're in the midst of an emergency or natural disaster, or if you're just going on a months-long hike or backwoods tour in your VW van, the DayOne has your clean drinking water concerns covered. A single one of these...

Is this how all those namaste-in' yay-hoos are able to do yoga on their stand up paddle boards? They've got a little foldaway anchor tucked in their dry bags? Pssh. Headstands and flying crows on a paddle board. I can...

Don't just commune with nature, blend in with it nestled inside this Realtree camouflage-printed floating island. At least until you, the 3 buddies you've got next to you, and the case of beer and MEGABOOM speaker you've...