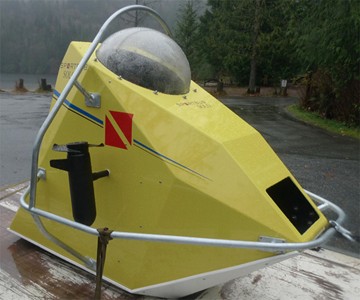 Maker International VentureCraft Corp. describes the One-Person SportSub Solo as a "yacht toy." That can't be a good sign of its retail price. Another bad omen: their Website lists no costs for the submarines themselves, but does give pricing for spare parts and upgrades that start at around $3,000, and head up to $15,000 or so. Yikes. I'd estimate a brand new SportSub Solo--the company's most basic underwater exploration kit--rings it at around $40,000. Which is why online auctions and secondhand shops still hold a special place in my financially destitute heart. For the next 24 hours--through September 11, 2012--a dude on Ebay is auctioning off his lone ranger submarine for a base price of $4,500. The reserve has yet to be met, so chances are a single bid at that amount would take home the subsurface wanderer.

The SportSub Solo, recently featured on Ultimate Air Jaws during the Discovery Channel's Shark Week, is a wet submarine. Meaning that the pilot's head is his or her only body part not exposed to water. Noggins are encased in a dome-shaped, water-tight air pocket atop the watercraft, which receives a constant flow of oxygen at depths of up to 30 feet, for dives times of up to 60 minutes. A duo of thrusters allow for precise control and maneuverability, with the sub capable of rotating in its own length, hovering, and flying straight up and down--a range of movements similar to those of a helicopter.

Two marine batteries power the SportSub Solo, and help clock its weight in at 150 pounds. The kit comes standard with a complete set of all accessories necessary to operate it, less the a SCUBA tank for the air supply, dive computer, compass, and battery charger to recharge the vessel's batteries. Check out further descriptions and technical specs here.

The Ebay seller's SportSub--which he states cost over $30,000 new--is ready to ship on heavy-duty pallets from the Los Angeles area. It includes all documentation and manuals. Despite negative pricing implications, classification as a "yacht toy" has the positive effect of excusing the submarine from most States' registration and title requirements.

Ahhh. It's a see-through canoe/kayak that seats two and provides the perfect setting for a romantic, yet adventurous date of paddling the high seas and taking in all of its technicolored fishies, regally swaying anemones...

It's not a set of human gills, but at least Tribord's Easybreath snorkeling mask doesn't require technology that hasn't come forth from hypothetical existence yet to work. This will make it somewhat easier for two-legged...

TRITON, the human gills design concept I showed you dudes here 2 years ago (and which many of you had mucho to say about in our comments section) is running a crowdfunding campaign to actually produce the equipment. TRITONs...

Seabreacher water jets snugly seat two people with exceptional control over their stomachs and bowels for a nautical roller coaster ride of dives, breaches, spins, and respective surface and subsurface speeds of up to...

What is there to say about Tropical Tahiti's floating island raft fit for you and 7 of your favorite water-lovin', sun-soakin', float-happy, swimsuit-clad cats besides P-A-R-T-Y and O-R-G-Y?...

What up, Jaws? You ready for a little face time with me and my impenetrable acrylic underwater sightseeing window? Korean company Raonhaje's EGO, a compact semi-submarine/motorboat hybrid, has flipped its room with a...

Supermarinovation asks, "Have you ever been snorkelling and seen something incredible below you, but haven't been able to get to it before your breath runs out?" To which I say, "Sure." And follow up with, "And have you...

You know those dreams you have when you're flying, spinning, disoriented, or drowning? They're all about to come true. At once. The SUBWING underwater glider attaches to a rope and boat at one end, and your death grip...

Many of us dig communing with corals and fishes and hot merpeople lookin' for a good time 40 feet beneath the ocean's surface, but suited up SCUBA-style in bulky BC vests and heavy oxygen tanks sort of encumbers the experience...

As we prepare to honor the USA with a day of drinking beer, eating potato salad, dinking around with bottle rockets, and setting fire to the sky, the Four-Barrel Underwater Dart Gun would like to remind us we should also...

Bite down on a Scorkl and you'll score 10 minutes of untethered underwater breathing. No snorkel confining you to a foot below the water's surface, and no loading up with a 35-pound SCUBA tank and BC like an aquatic pack...

Were these sweet (cheeked) Butt Buoys used in the making of Weekend at Bernie's? If not, they should have been. Ahhh, nothing screams 80s class louder than a PVC anchor marker fashioned in the shape of an inverted lady's...