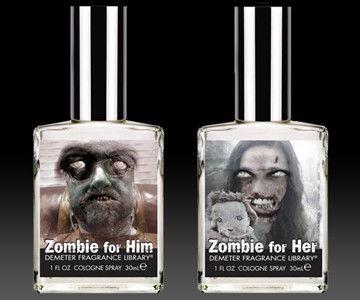 It seems to me that smelling like a zombie would not bode well for one's interactions with humans. I imagine the scents of Demeter's Zombie for Him and Zombie for Her incorporate a rank melange of decaying organic matter (i.e., people meat) and infected open wound, with maybe a little inside of jock strap thrown in for good measure. Show me one lady who's into that, and I'll show you one lady I am not interested in sleeping with. However, the cologne could be the surprise star of any concerned citizen's Zombie Survival Kit, as it stands to reason that those who smell like zombies could pass for being zombies, and thereby avoid pursuit, infection, and/or slow painful death at the hand of the real thing.

Oh. Upon further review, it appears that Demeter took a different approach to their colognes. Zombie for Him wafts of dried leaves, mushrooms, mildew, moss, and earth. So sounds like it still reeks in a way that will guarantee its wearer isn't getting laid, but not in a way that will render him undetectable to brain eaters. A lose-lose deal. Perfect. Ladies, on the other hand, you get to smack of a slightly lighter version of the above mixture, with a touch of Dregs from the bottom of the wine barrel. You won't smell good either, but will probably still get some because even though men talk about rating women on a scale of 1 to 10, most just use a binary scale of 0 or 1, with 1s being acceptable bedding material, and 98% of women being 1s.

It's gonna cost you a helluva lot more than hot fudge, sprinkles, and Old Spice, but Salt & Straw's Culinary Perfume, an edible fragrance and ice cream topping, is sure to be the foodie gift of the year. Or at least of...

Sure Fuck Cologne is a self-described "cool fresh manly scent that thrusts women into a crazy hot SEXUAL FRENZY!" Whoa. That's specific. They even put "sexual frenzy" in all caps like it is when I think it over and over...

Swallowable Parfum is a capsule that, when ingested, releases perfumed scents through its host's pores. So instead of spritzing dewy showers of juniper and orange blossom onto your body, you'll be able to sweat aromatic...

Sex Panther Cologne, the fictitious cologne from the movie Anchorman has become a reality. I've heard that a certain percentage of the time this stuff works every time. That's what I've heard. I'm not sure what those...

Diesel Sound of the Brave Cologne

Sound of the Brave Cologne, Diesel? Seems to this dude the name should be Smell of the Brave. An eau de toilette made especially for:...

Erox is a unisex body spray that synergizes scents of grapefruit, bergamot, pepper, lavender, and amber with actual human pheromones. It's like Axe with pseudo-pop-scientific research, and reality-TV vixen Adrienne Curry...

"Steel on steel on rubber on road." And also some sweetness and spice so you won't make the ladies gag. Sunoco Burnt Rubber Cologne seeks to bottle the essence of racing so you can enjoy your fast and furious experiences...

Spray the Bi*ch Away Aromatherapy Perfume

Dude. When I saw the name "Spray the Bitch Away" for this bottle of aromatherapy perfume I thought it was for men with mean wives and girlfriends, or crazy exes. I thought it would be the perfect Anti-Valentine's Day...

In the words of the great Marcy Playground, "I smell sex and can-dy." Or is that sex and cran-ber-ries? With tonka mousse and a hint of Tuscan blood orange. From the perfumers and the sexologists who brought you Sure...

Campfire Cologne. In case a scruffy beard, lumberjack button-up, and logger sports on the Outdoor Network aren't enough to satiate you during the winter months when your favorite campgrounds are covered in snow. In case...

Sexes, styles, and personas collide in the Solaris Lockstone braceleta. These pieces give a nod to the night sky encircling wrists with a choice of dark and dreamy semi-precious stones leading to a series of personal...