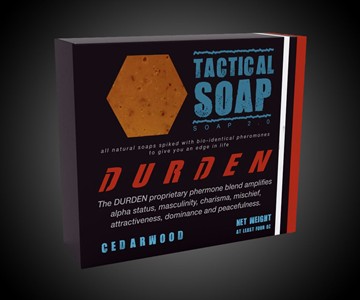 Tyler Durden doesn't need any help from pheromones to get laid, but, uh, I could maybe use some if they work. And Tactical Soap maker Grondyke Soap Company assures me the evidence suggests that they do. Tactical Soap is a line of sudser uppers infused with proprietary bio-identical pheromone formulas. Or, as could more appropriately be deemed the case with the company's inaugural Fight Club-inspired release, the Durden: it's a bar of soap that's been punched in the face by biological lady bait.

Each Tactical Soap will eventually focus on pheromone blends that target specific male traits the opposite sex tends to find attractive. With Androstenone as its chemical foundation, the Durden has been calibrated to jack up your:

I plan to use my bar of Durden this Friday night. I will let you know if I wake up Saturday morning handcuffed to the bed with fingernail welts all over my chest and back, and Angelina asking from the kitchen how crisp I want the bacon she's frying up to accompany my bacon omelet, bacon hash, and toast with bacon jam.

Durden's, along with all forthcoming Tactical Soap, pheromone cocktail has been formulated by a clinical psychologist, and comes backed by various studies on the legitimacy of true chemical attraction. To check out the results of one of those studies, Grondyke Soap Company recommends watching this test ABC's 20/20 did using 2 sets of twins at a speed dating event in New York. Note to Sara and Bridget: Pheromones or not, I would be more than happy to go out with both of you. At any time. Even at the same time. Preferably at the same time....

The non-sex-magnet components of Durden are all natural soap with a cedarwood scent (pheromones themselves are unscented).

If one of the grievances you aired during Festivus last December was slimy soap bars and their bulky plastic travel containers - that invariably let some of the slime slip out into your suitcase or dopp kit - Has Matador...

The waste! The slime! The bacterial cultivation! And that's just from soap and loofahs, the things that are supposed to keep you clean! SudStud is a new shower scrubber, a soap sleeve and alternative to loofahs, washcloths...

What if your bar of soap's slivered remains could transform from flat to stacked with no hassle, no waste, and no complex procedures or anesthesia? Simply and terrifically brilliant--like so many Kickstarter projects--Stack...

I don't think that's how you spell "wiener" or "cleaner", but I'm willing to overlook the mistake on account of the fact that my penis has been bugging me for its own soap ever since it got the wrong end of a bar I used...

When I see this - a true masterpiece in fine art - it reminds me of another masterpiece, the musical masterpiece "Get Low" by Lil John & The East Side Boyz. And specifically the song's refrain: To all skeet skeet, motherf**ker...

Delightful. Precious. Wonderful. The best. Those are the words I am certain my wife and my mama will use...to describe me when I give them each one of these Elephant Soap Dishes (with water-draining trunks!) Just a lil'...

August 2014 Update: Having received multiple emails from Dude readers noting that they ordered, and paid for, the Super Shaver Soap Saver months ago and have neither never received their product, nor an explanation for...

Texas Toothpick is a euphemism for this 2-pronged S-curve's true nature and intent. I almost selected it as the next edition of What Is This Thing? but decided its application isn't discrete or practical enough to make...

If you're a man who thinks of his bathroom as his other office - or his king's chambers - why shouldn't you have a wish list of goods and supplies...and a luxury bathtub or two...you'd like to see inside it? I can't speak...

Know someone who could be a little more diligent about washing their hands? Or their body? Just remember, you catch more flies with honey than vinegar. Or, in this case, you catch more hygienic kids and friends with cash...

Erox is a unisex body spray that synergizes scents of grapefruit, bergamot, pepper, lavender, and amber with actual human pheromones. It's like Axe with pseudo-pop-scientific research, and reality-TV vixen Adrienne Curry...

Welp, Umbra, in years past I would say an automatic soap and sanitizer dispenser, regardless of how snazzy it looks and acts, isn't what anyone has in mind when they say, "Make it rain!" But in this age of pandemics that...