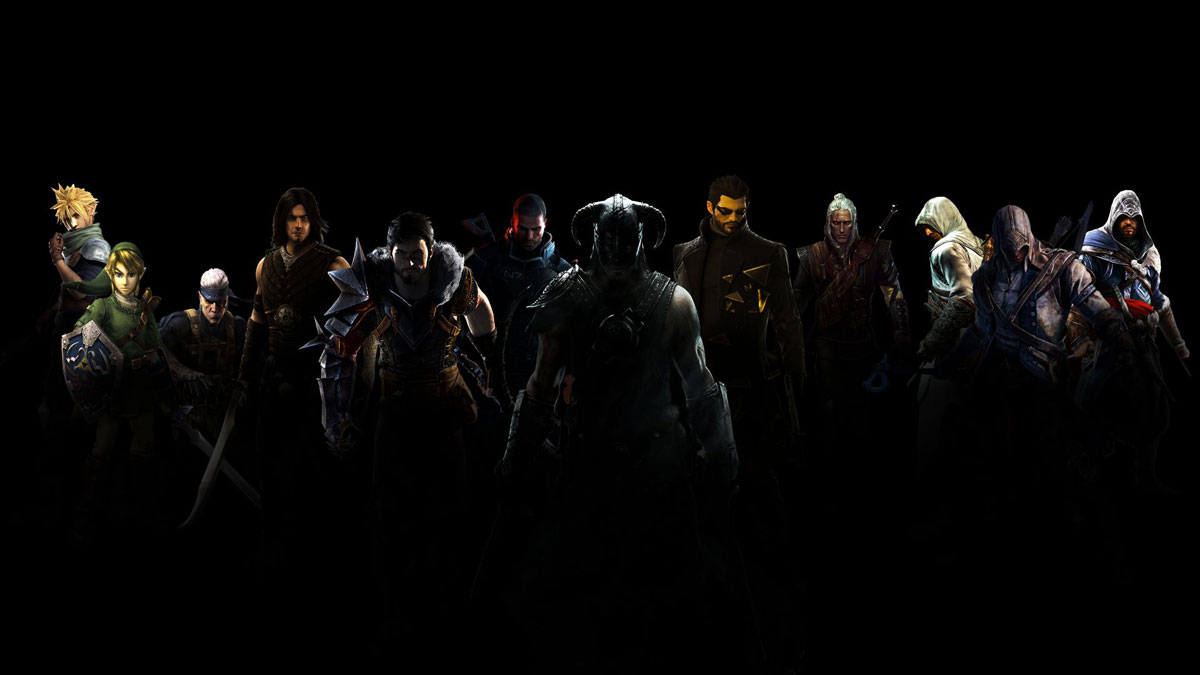 The guns, swords, and Personal Information Processors you wield on screen may not exist in real life...yet...but many, many attempts at replicating them do. From old school to new school, computer to console, fantasy to in the field, and the 700s to the 2700s, here are my picks for the Top 15 Video Game Replicas (Note: While some items are available for purchase, others are one of a kind and were not made for commercial distribution. If an item was for sale at printing, its entry will include the purchase price prices. All prices are listed as they were at printing. Prices are subject to change.)

Destiny Thorn Hand Cannon. Starlight 3Dee 3D prints these Thorn replicas at 20% infill. You have have the option of buying your Weapon of Sorrow as a DIY kit, arriving as pieces requiring super or plastic glue to assemble the model. The Thorn is about 15" long and, of course, non-functional, so even if I had one I guess the pigeons camping outside my bedroom window would live another day.

Mega Man Mega Buster. $80. Includes the full gamut of light and sound effects. When turned on, the cannon plays a power up sound and illuminates its power meter as it fills up. Once your arm is nestled inside and your brain prepared for action, trigger pulls fire off energy blast sounds and the blaster's end flashes. A held trigger produces continual, intensifying sound as the power meter fills, and then fires a supercharged shot upon release.

Thrall's Doomhammer. This World of Warcraft replica is Volpin Props' interpretation of the Doomhammer as it appears on the cover of the novel The Shattering. Volpin mastermind Harrison Krix describes his incarnation as "formidable and quite large, but just a bit shy of gigantic." It measures 30" long, but with a head constructed of hollow sections, is much lighter--and less deadly--than Thrall's own.

Team Fortress 2 Heavy Minigun. Cory Alexander's day job is running a company that manufactures rotating equipment. Judging by his work on "Sasha", he's probably as good at his day job as he is at his prop-making hobby. Alexander built the Minigun from both 3D-printed parts and traditional techniques and materials. It includes lights, motors, and full sounds, courtesy of a 12v Li-po pack and 2 x AA batteries. See a video of the Russian beast here (action starts at 4:50).

Poe Soul in a Bottle. $14 and up. This Legend of Zelda incarnation makes the list mostly because I gave one to my video game-hating but macabre things-loving girlfriend for her birthday and it went over well. Very well, if you know what I mean. Just trying to pay it forward with the tip. Each 1-1/4" Poe Soul bottle houses a red, blue, green, yellow, or purple glow-in-the-dark Poe Soul with searing yellow eyes guaranteed to terrorize children.

Half-Life Gravity Gun. Another Volpin Props/Harrison Krix especiale, this Zero Point Energy Field Manipulator was made to auction off in the 2011 Penny Arcade auction. The annual event benefits Child's Play, a charity funded largely by gamers and the gaming industry that helps kids in hospitals and domestic violence shelters. If you're willing to settle for a more half-assed version of the Half-Life replica, NECA has one for you for around $160 here.

Fallout 3 Terrible Shotgun. This Volpin Props issue was made as both a collectible and a prop for the web series Nuka Break. It consists largely of metal parts, with a rear stock and forward grip cut from red oak. The gun's butt plate has the logo of Dracogen, slated to wield it on the set of Nuka Break.

Fishbones. The League of Legends rocket launcher gets a big--huge!--nod from Volpin Props. It measures a grand 43" long nose-to-tail and features light-up eyes and an articulated mouth whose jaws pivot on spring loaded hinges for control by the real-life Jinx operating it.

Caius Ballad's Sword. It took 250 hours for a 67" young lady to handcraft this 73.6" behemoth from Final Fantasy XIII-2.

Helm of Yngol. Skyrim's second entry on the list, because there's nothing more satisfying IRL than going medieval. Want to see a video of its entire fabrication process condensed into 4 minutes? Harrison Krix throws you the bone here.

Halo Needler. Whatever Volpin Props makes is always one of the best in existence of whatever it is. The Needler project was one of Volpin designer Harrison Krix's most difficult projects, consisting of 15 different molds created for individual components, and a final product comprised of 24 different cast parts. The Halo replica features 54 LEDS for needle illumination and blue accents on the gun's body. This Needler plays the Power On, Semi-Auto Fire, and Full Auto Fire sound effects from Halo: Reach.

While the Volpin Props Needler is not for sale, those who really, really want one can grab a limited edition replica from NECA in time for the October 27, 2015 release of Halo 5: Guardians. A few clicks and $300 is all it takes. Start here.

Pip-Boy 3000 (link to video). The electronic PIP manufactured by RobCo Industries in Fallout 3 and Fallout: New Vegas is now a viable acquisition to your non-gaming, non-digitized, biological life. If you can build it. My Magic Pudding will tell you how he made the above Pip-Boy 3000 prototype here.

West Coast Customs Mario Karts. Custom built in tandem with the 2011 release of Mario Kart 7, this real-life Mario Kart from WCC made its first appearance at that year's LA Auto Show. Sadly, you'll probably never see it on a street near you because although the electric classic standard Mario Kart and its brother Luigi Bumble V model (not pictured) are fully-functional, they are not street legal. Both karts were given away to a pair of drawn winners as part of a Mario Kart 7 promotion to game buyers in 2012. Check out the reveal video here.

If you thought beating Super Mario 64 was hard to beat, get ready to try to conquer LEGO's new 2,064-piece Super Mario 64 Question Mark Block build. It might feel a little like banging your head against a...question mark...

If you "fertilize" it properly and approach it from the right end, not only will the Piranha Plant not kill you, it will actually ease any pain you may have, and make you feel blissfully content. Though also maybe hungry...

Hot. Sexy. Latex. When I think of Mario Bros. those are definitely the first 3 words that come to mind. And this latex dress captures that perfectly. I wonder how sweaty I would get if I tried to put that thing on? Not...

The lamp is a 1" black iron pipe and its fixture is a vintage recycled glass insulator and the Mario hovering above the decorative green pipe is the light pull! Sweeeeet! Mama! I need to borrow 199 dollars. And 35 cents...

The resurgence of 8-bit Atari and Nintendo games in non-Atari and non-Nintendo forms. It's a phenomenon of second-decade-of-21st-century culture. Like zombies. Like bacon. Like, a wise soul pointed out to me the other...

Here's a good way to keep strangers from touching your kid. Jeanette and her Naturally Crafty Etsy shop have craftily pounced on and taken down the scowling, snarling, pixel-thirsty King of the Koopas, and Mario's arch...

Pipes, mushrooms, a Cape Feather or two, and it's even a real, useful map of the New York City subway system. The Super Mario NYC Subway Map salutes Super Mario World in its pixel-by-pixel mass transit trek through 16-bit...

It may not be a block, but crack your head against this yellow question mark and you'll still enjoy the spoils of gold coins and a mushroom o' added life. Or at least a temporary increase in energy from its 58 or so grams...

Dunuh-nuh-nuh-nuh-nuh. The only way the sweet sounds of Mario head butting bricks and eluding sly goombas could resonate any more beautifully in my heart is if they were played live. On my very own Game Boy electric guitar...

These are fully operational replicas from the classic Mario Kart series on Nintendo and they're pretty damn awesome. Great gift for any Nintendo or Mario Kart fan. Best part, no blue shells to snatch defeat from the jaws...

1UP! 1UP! 1UP! 1UP!1UP!1UP! As many 1UP! radish-mushrooms as your little fingers and wrists can churn out without cramping up or going arthritic, thanks to Animi Causa's new Ravanello. Did they intend for the shaper that...

Nintendo Collector's Edition Monopoly means I get Zelda's Sword! And I plan to use it in a reign of terror against Mario's chump Mushroom and Pikman's brokedown Rocket. I imagine that wily Mario Star and Samus' Helmet...