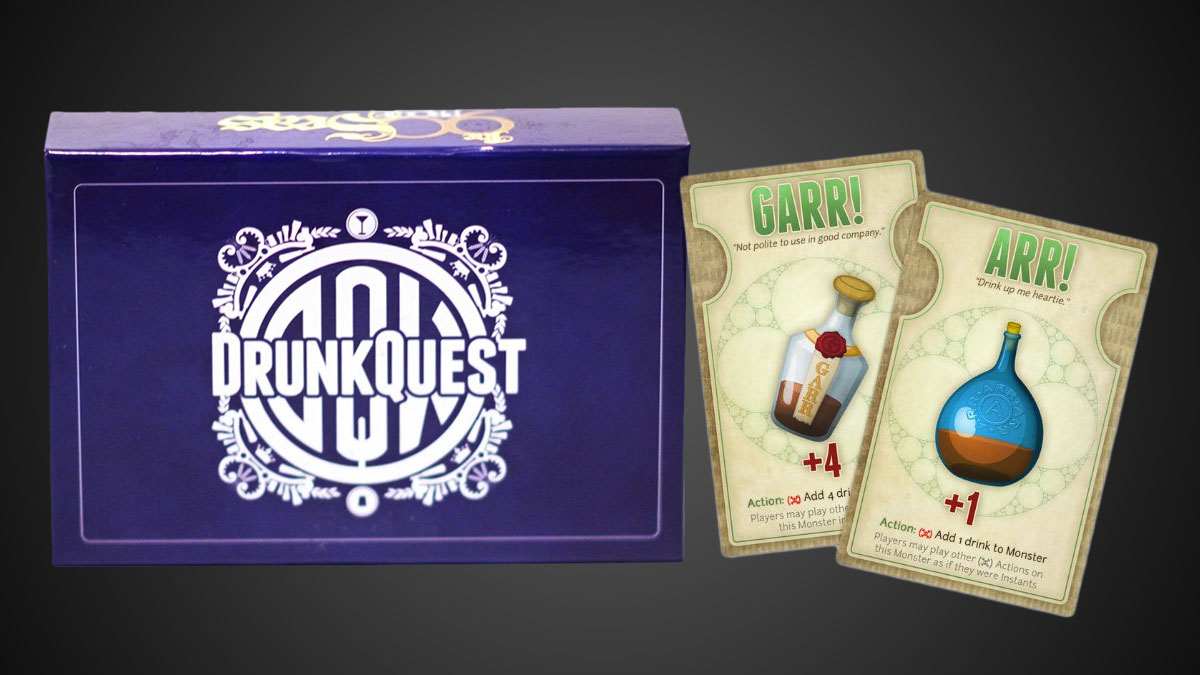 Sold Out from Amazon »
Check It Out

It's Dungeons & Dragons for the boozin' 21+ crowd. DrunkQuest combines fast-paced card game mechanics with shades of the D&D fantasy world with a few 6-packs and a liter or two of Captain Morgan for a party game of competitive entertainment and epic inebriation. Creators Jasn Painter and Athena Cagle of Loot Corps have heard playtesters describe DrunkQuest as "Munchkin with booze", and advocate the portrayal. They designed the liquor-laden saga with straightforward rules and magic cards that are easy to understand, so that anyone--even those who begin the Drunk before the Quest part--can pick up and get in on the action in minutes.

A typical DrunkQuest game runs from 25 to 45 minutes, accommodates 3 to 6 players, and rolls as follows:

DrunkQuest runs as a Kickstarter project through September 7, 2012. It has already exploded so far past its $12,000 funding goal that Loot Corps has added multiple levels of Stretch Goals, with added perks going to backers if the project achieves funding levels of $40,000, $50,000, and $70,000. The $25 pledge amount returns a copy of DrunkQuest, along with 2 special edition Kickstarter cards, the Werewolf Hero Class, and the Shineshire Realm card. Higher pledges come with DrunkQuest swag, such as engraved bottle openers, logo-ed beer koozies, etched steins, T-shirts, and additional copies of the game.

February 2013 Update: Pursuant to successful funding, DrunkQuest has completed its production phase and is now available through Amazon to all parties interested in mixing liquor and gaming.

Wonder what kind of damage concrete dominoes do when you knock them over. This Juego de Domino set is made by MDC, a concrete design studio based out of Mexico City. And, perhaps for the first time in contemporary history...

Go big or go home could be the motto for pretty much any drinking game, but it seems especially appropriate for Wicked Big Sports' Supersized Flip Cup Game. I'm not sure if flipping a 12" tall cup will be more difficult...

In today's world, The Change Game could mean anything. A TikTok challenge that times who can change from work clothes to sweats the fastest (in honor of and sympathy with those of us returning to our offices.) A bit of...

Having trouble getting ice time...on the curling rink? Worry not, because the Curling Zone indoor curling game brings the Olympic sport's laser precision and watching-paint-dry excitement right to your living room! The...

You don't need to buy a set of Slip, Sip & Flip to play a version of flip cup meets the waterslide. Not as long as you have an old Slip 'N' Slide - or, better, Super Slide - stuffed in the garage, and a folding table...

The Iguana Smart Sack, being app-enabled with a Bluetooth sensor insert, is smart...yes. I guess. Technically. But take a look at its app interface, which reminds me of the Oregon Trail screen on my Apple IIGS. The lithium...

One time I read a book willingly and it was called The Average American Male. The entirety of its plot basically consisted of the narrator thinking about what it would be like to have dirty sex with every woman he saw...

I'm not really into dolls or fairies...anymore...but if someone wants to commission me one of Shadowsculpt's goth angel fantasy figurines, let's just say I'm not going to regift it along with the label maker from Elaine...

No matter how you feel about sex dolls, there's no denying this sex doll is hot. A feverish hot, at up to 104 degrees F! She's smart too. Smart enough to tell you how good you heat her up, to moan in response to your...

Usually the only people I credit for being clever, relevant, and hilarious are myself and sometimes Stephen Colbert, but the cards of party game Drunk Stoned or Stupid demonstrate there might be a few others out there...