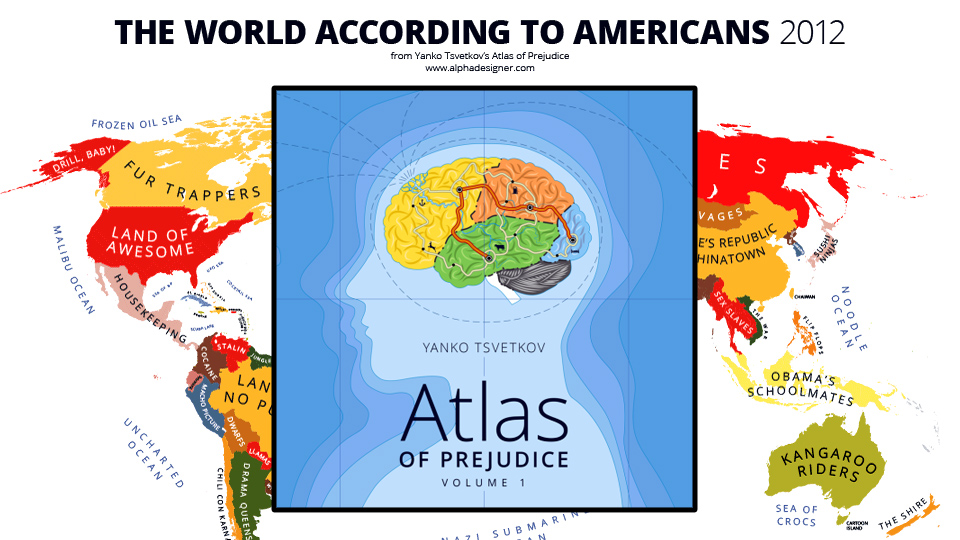 In the Atlas of Prejudice Tsvetkov's adds accompanying narratives to his 40+ stereotypical, prejudicial, and, most importantly, satirical maps. He recounts the full story of the Mapping Stereotypes project, plus offers his own assessment of the delight humanity has seemed to take in pigeonholing and talking trash about anyone deemed "not like me" since civilization began. The essays "offer an even deeper but equally hilarious perspective on our inherent tendency to randomly blame people simply because someone convinced us that they ate our breakfast."

If Atlas of Prejudice: Mapping Stereotypes is to be believed, the world didn't start its animal domestication efforts with the dog, it started them with the scapegoat.

The World According To Americans

With the possible exception of the "AIDS" label that's covering half of Africa, some of these American stereotypes of the rest of world are surprisingly lacking in wickedness. I would have expected less superficial ignorance...

Lost in the Woods: 15 Items to Help You Find Your Way

These 15 items that help you when you're lost will find north, map routes, illuminate dark spaces, and, when all else fails, SOS your stranded self some help. In other words, they will pretty much ensure you dudes and...

Map of the Internet

Jay Simons and Martin Vargic: students; graphic designers; Slovakians; Internet cartographers. If the Web were divided into land masses, grouped along lines of latitude and meridians and flattened into a map on your desk...

I'd call the Tungsten Sphere a desktop toy, but given its high density--at just about 2" in diameter the sphere weighs over 3 pounds--I'm not sure how much fiddling or stress-relieving palm rolls you'll be able to do...

In case there was any confusion, Poundtown Condom vendor Say It with a Condom specifies this particular latex shroud is for "anyone who's a Poundtown regular, or is coming for the first time." Haha, get it? There are...

Ahhh, a globe-shaped fire pit whose flaming cutouts are our planet Earth's continents. Just like my grandma always said: the next time the world goes down, it's going down in flames. This sinister piece of social commentary...

Monsters in America: A Cryptozoological Map of the United States provides descriptions and locations of origin for beasts ranging from the Jersey Devil, Bigfoot, Mothman, and Chupacabra to Shunka Warakin, Caddy, the Honey...

Memories of the most beautiful, challenging, momentous trail you've ever traveled become a custom, 3D work of art, courtesy of Topo Trail Maps. Out of his studio in Oregon, Trevor Crosta handmakes every Topo Trail Map...

All foodies and hungry people know the best way to go through the USA is to eat your way through the USA, and this American Foods Scratch Off Map is going to make easy work for all the big and adventurous travelers with...