How to Stop Feeling So Damn Depressed 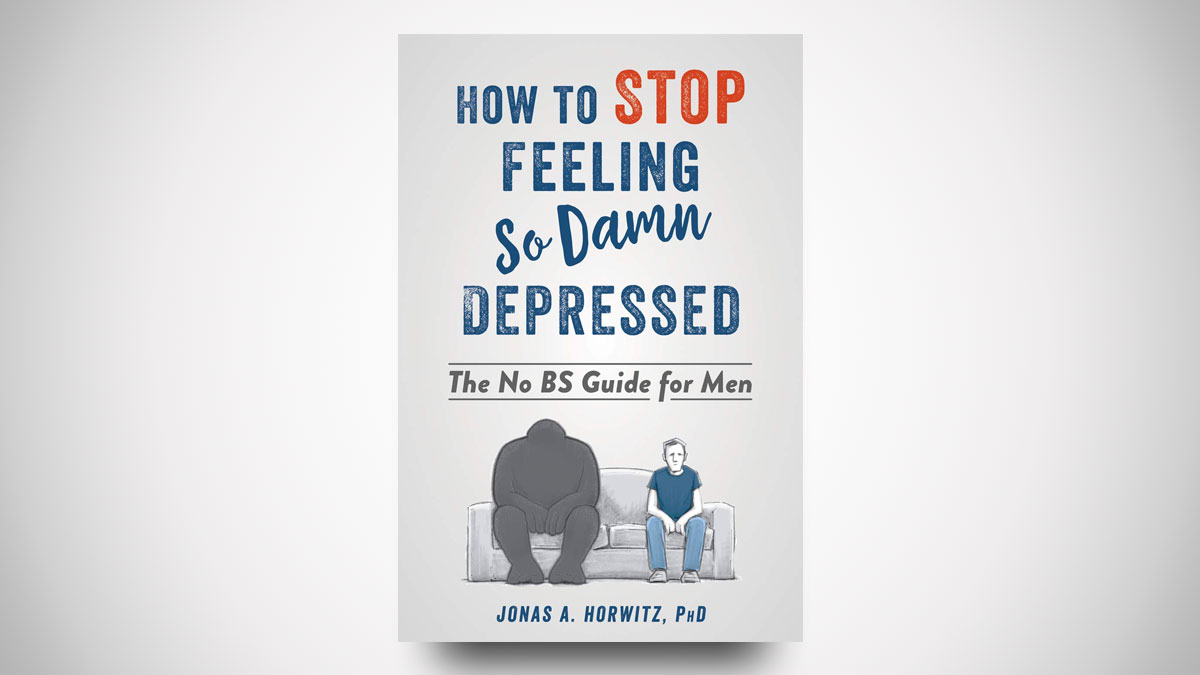 How to Stop Feeling So Damn Depressed is for all the dudes out there looking to feel a little less Eeyore, a little more Tigger. In fact, psychologist Jonas Horwitz has written his No BS Guide specifically for men, and specifically for men hesitant to read a self-help book, figuring they'll just get flooded with jargon and blathering.

Part of Horwitz's No BS approach is to write simply, more like a (surprisingly emotionally mature and open) buddy than a shrink, and to convince men with depression that they should take it seriously, treat it as they would diabetes, cancer, heart disease, the stuff that can kill them. He calls depression The Beast, giving it an identity separate from the reader's own, to explain how it uses trickery and antagonism to attack when its host is most stressed, and make him think and behave in ways that feed The Beast, perpetuate the depression.

Horwitz then shares How to Stop Feeling So Damn Depressed, providing methods for changing your behavior, which can directly change your brain chemistry, and slay The Beast. Or at least debilitate him enough that you can take back your life.

14 Gifts for the Bummed Out & Stressed Out

These 14 gifts for the bummed out and stressed out recognize that the holidays are not the most wonderful time of the year for everyone. And in this year of 2020, one of the most BSC of all the years, that sentiment probably...

If you're on the hunt to brighten someone's day, these 15 little gifts should present you with plenty of opportunities. Whether it's a spouse stressed from work, a buddy down on dating, a mama about to have a Mother's...

The last day of summer is a sad day for everyone, but for some, that transition into fall, and then the gloom of winter, is even sadder. SAD sadder. PEGASI's second edition Smart Light Therapy Glasses endeavor to help...

Give dark days some light - and some style - with this Art Deco Light Therapy Lamp from Circadian Optics. The mood light / sun lamp brings replica, and UV-free, rays to your home or office, providing a bright and happy...

Cures for the Winter Blues

While seasonal affected disorder is a real, diagnosable form of cold weather sad (or SAD), some of us are just a little down in the dumps this time of year with the winter blues. Going stir crazy inside. Frustrated with...

This tablet-sized light therapy lamp is here to turn your winter frown upside down. While many studies indicate extended screen time is harmful to our bodies and mind, this "screen" emits up to 12,000 lux of sunlight-simulating...

The Atlas of Happiness

Looks like Denmark's Hygge concept has set off a trend. Now the Danes' methods aren't enough - we need a whole Atlas of Happiness to figure out The Global Secrets of How to Be Happy. Author Helen Russell delves into other...

'Tis the Season for Suicide Ornaments

My nickname is Mr. Brightside, but I get that it takes all kinds to make the world go 'round. So cynics unite! And relish skateboard artist Todd Francis' "'Tis the Season for Suicide" ornament series. Yep, for every merry...

The Dictionary of Obscure Sorrows

The Dictionary of Obscure Sorrows could also be called John Koenig's Dictionary of Words He Made Up Himself to Describe Very Specific Feelings. But that title doesn't sound as nice, and probably wouldn't make most people...

20 Gifts for Every Mood

Life: it's a whole mood. Which is to say it's a mashup of all the moods. Here, I've picked out 20 of them, and paired them with a gift, a product that either exemplifies the mood and the feelings that come with it, or...

Philips calls their Somneo Connected "the wake-up light designed to help you sleep." More than just a sunrise-simulating alarm clock, this light therapy lamp has built-in sensors to measure the temperature, noise, light...

Don't worry, F*ck Feelings: One Shrink's Practical Advice for Managing All Life's Impossible Problems isn't a bait-and-switch. You know, one of those self-help books that claims it won't go all emo about how your mom...