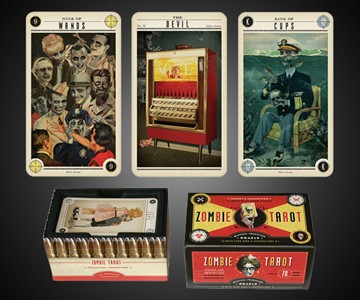 I don't think it would be that hard to be a Zombie Tarot Card reader. Everyone's fate would be the same: death. I suppose you would have to get a little creative in describing the specifics of each poor sap's demise, but I'm sure some of the lunatic bloggers of the Internet could be of assistance in that endeavor. (Feel free to use the Dude Product Tips form to request a few choice nuggets from me.)

In the zombified universe of occult readings, tarot cards' wands become limbs and pentacles biohazard symbols. The Major Arcana? Chock full of shambling corpses. The deck includes 78 cards spanning from an elderly Queen of Swords holding a semiautomatic to a wee Face of Wands gnawing on a bloody bone from his highchair. Also accompanying the set is a 96-page full-color book explaining both how to forecast futures of pain and destruction using one of three different tarot card layouts, as well as tips for surviving the still-impending Zombie Apocalypse if you happen to get a client insistent on fighting his or her grim predictions.

The Zombie Tarot Card deck has received a highly positive response from Amazon reviewers, both those who appreciate their campy nature, and those who actually believe in this creepy WhoopiGoldbergfromGhost BS that makes me very uncomfortable, particularly when I draw a card like the Cups kid on the beach, who appears not only to be looking at me, but through me into the depths of my tarnished soul.

Watermelons. You poor bastards. Always on the receiving end of novelty weapon violence. The Gotcha Cap. The Unbreakable Slugger Umbrella. The <a href="https://www.dudeiwantthat.com/gear/weapons/blade-driver-crossbow.a

Usually the only people I credit for being clever, relevant, and hilarious are myself and sometimes Stephen Colbert, but the cards of party game Drunk Stoned or Stupid demonstrate there might be a few others out there...

Unlike run-of-the-mill kitten explosions, Exploding Kittens: NSFW Edition contains content that is not suitable for your workplace or children. And even though no one seems to be saying it, I'm guessing a card game featuring...

One look at this deck of Sexy Tarot Cards, and I definitely see one thing in my future: some alone time in the bedroom with my wife...

Who wants some undiluted geekery? code:deck is a standard set of playing cards individually described by rank and suit in one of 13 different programming languages. As maker Varianto:25 points out, the cards should arouse...

Since the holidays are over, seems like we should be focusing less on the 7 Deadly Sins in our playing cards box sets, and more on poker nights and COVID-quarantined hours of solitaire with suits sporting the 7 Heavenly...

I'm from the Price Is Right generation. We like to roll the dice and spin the wheel. Also, I'm kind of into pretending I'm a 6'7" impenetrable warlord with webbed toes that assist me in making skilled water escapes. Also...

Welp, an Elder Futhark Viking Rune Divination Set is about as trustworthy of a source for news and information about the future as anything else these days. Seller The Norse Tradesman even calls using the set for fortune-telling...

Level Up Board Game Platform

Level Up. The perfect name for a modular platform with 6" legs set on your tabletop to, in every sense of the word, elevate your board, card, and role-playing games...

Yes, they shuffle. But they can't do the bridge/easy stack after the riffle, so if you want a deck of carbon fiber playing cards, you'll have to be willing to press them together and realign them into a neat pile yourself...