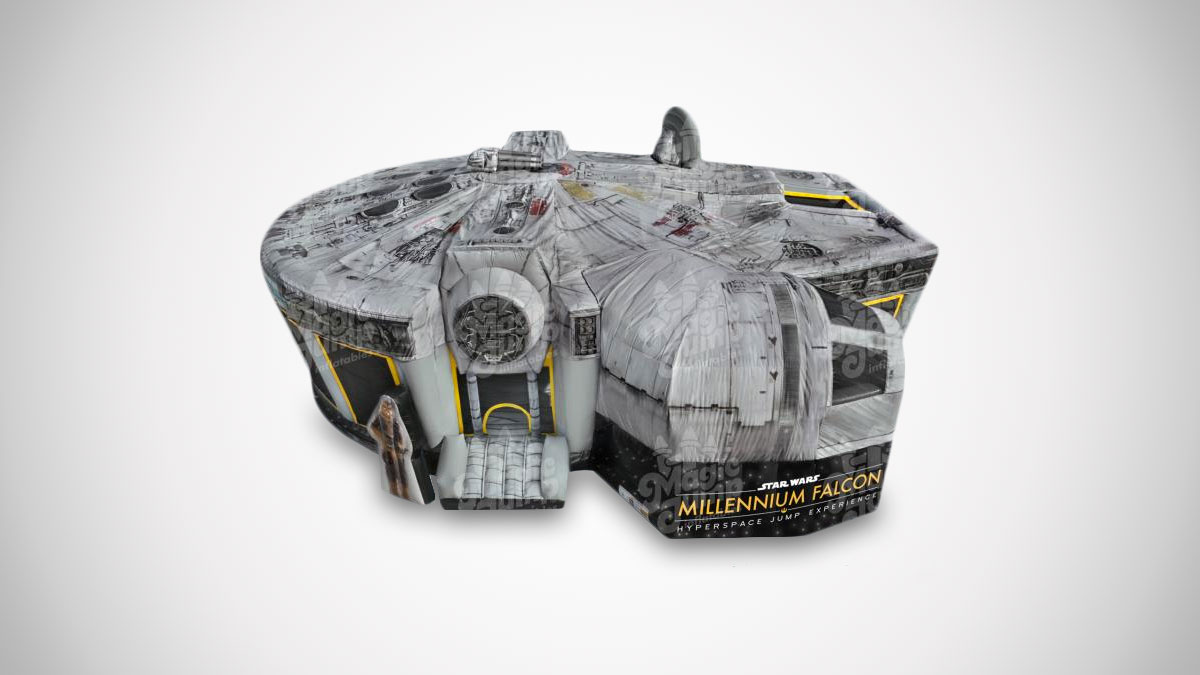 I see the Star Wars Millennium Falcon Experience bounce house, and so many ideas come to mind. Who needs a piece de resistance for their kid's Star Wars-themed birthday party? Who needs the ultimate accessory for their New Year's resolution to work out more? Who needs a way to burn off some of the anger bubbling up inside over how terrible The Rise of Skywalker was?

An officially licensed release from Magic Jump, the Star Wars Millennium Falcon Experience is a Star Wars gift to rival even the Rebel Bass Guitar (at least for those who have more energy in their legs than talent in their fingers). The inflatable spaceship is detailed in its graphic overlays, with an exterior covered in an application of the actual graphics of the Millennium Falcon's armored hull. Inside the bounce house you'll find various familiar faces and features from the Star Wars franchise, such as inflatable versions of Chewbacca and R2-D2, and C-3PO graphics.

Sounds like Han Solo is MIA, though, probably so anyone entering the blow-up Millennium Falcon can put themselves in the pilot role, possibly with a bikini-clad friend roleplaying Leia in tow for some real bouncy, bouncy in the bounce house.

Kids! Stop jumping on the bed...and start jumping on a Smol Bounce House instead. Smol makes bounce houses for the home - indoors or out - that both provide an active play area for the wee ones, and don't ug up the living...

The little plastic men make it look so easy. I'm not sure how much demand there could be out there for an inflatable human foosball arena, but if that's what bounces your house, EZ Inflatables is all set to blow up your...

Yep. That disposition looks about right for a baby in an octopus costume. Sure, you think turning your kid into an 8-legged puffy pink pillow with 0% mobility (albeit 80% protection from bumps and falls) is precious and...

The portable jump starter I keep in my trunk has saved me more than once. More than twice. (Stupid sensitive dome lights. I barely touch them heaving my bag over from the passenger seat and they turn on!) As an emergency...

No longer must you search the galaxy to find this Rebel Bass, but you will have to wait at least 3 months to get it. Last Fall, after photos of his custom Star Wars guitars had gone viral online, Englishman Doni opened...

The only thing this Millennium Falcon Asteroid Coffee Table is missing is my feet. As Han Solo and Chewie expertly maneuver their ship through an asteroid field to evade Vader and his fleet, I relax with a Bud Light Lime...

Have you been searching for the perfect blueprint light? Me too. And wow. This 16-color LED desk lamp went with the Millennium Falcon as its subject! I thought I was going to be stuck with, like, the White House or some...

Since Solo: A Star Wars Story sees its first nationwide screenings in theaters tonight, I figured I'd feed the Han mania - the Hania - by looking back at some of the best Han Solo-inspired merch we've seen over the past...

This collection of Star Wars Rugs from Ruggable is...illuminating. I mean, the Dark side in black-and-white damask. TIE Fighters in abstract houndstooth. The Empire Strikes Back in blue toile! I'm finally starting to...

Air Hogs' Millennium Falcon Quad is recommended for ages 8 and up. Huh. I'm not sure if it makes me feel youthful or really uncomfortable that I'm sitting here right now coveting a toy made for an 8-year-old...

Commercial airlines can suck it, and even private jets and Santa's sleigh have nothing on the sweet ride these Millennium Falcon blueprints will help me build for my holiday travels this year. Over the river and through...