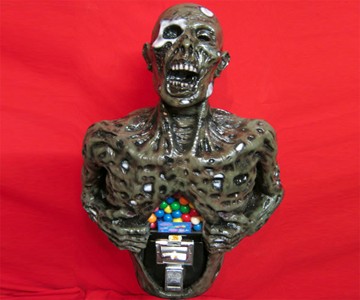 I hope a hissing zombie with a sinister smile and graying flesh that has 80% rotted into a muscle-fascia-exposing slimy film, who's in the midst of ripping open his own abdomen to reveal a fun and colorful smorgasbord of gumballs doesn't give anyone the creeps. But if it does--and I don't say this as a reverse psychological ploy, I say it in all seriousness--don't scroll down. Juneau Studios' superbly disturbing Zombie Gumball Machine will start looking like a furry white puppy you want to smother in hugs and kisses and belly rubs compared to their I-think-I-just-pissed-my-pants Insane Zombie Clown Gumball Machine. I don't even really have a fear of clowns--though I have been a little wary of them since 1997, when I saw that Michael Douglas movie The Game--but this clown's flayed and contorted face with the bulbous red nose and rainbow wig is a nightmare waiting to happen. Dude, that movie The Game was so good. I haven't thought about it in years, but now I can't stop. It's about this billionaire whose 50th birthday is coming up and he is kind of shrewd and unfeeling and wasting away his life, so his brother buys him this present and then he meets this chick and then people are after them and he spends the rest of the movie trying not to die. It's so good. I need to add it to my pirated downloads queue. Anyway, there's one scene in the beginning where he comes home to his 30,000 square foot mansion late at night and finds a life-size clown doll laying in his driveway. David Fincher was the movie's director, so trust me, the scene is F'd up. I mean, it didn't necessarily make me terrified of all clowns, but it did make me very suspicious of them. And this clown--the gumball one you shouldn't scroll down to if you have any sort of aversion to circus jesters in loud primary colors--is like the clown from The Game times 50 in both the scary department and the making me suspicious department, the latter particularly because he appears to be targeting children and trying to lure them in with his candy-coated gumballs.

Zombie Gumball Machines all stand 4-1/2 feet tall and are crafted and molded from fiberglass. The machines may also be stocked with non-gumball items, such as candy, bouncy balls, and glow sticks. Orders include the zombie, vending machine, and machine stand, but not the gumballs, or the earplugs you'll probably need for the first time anyone walks into your house and sees it.

Think about those nights you bolt upright in bed, heart racing, salty with cold sweat, awakened from a nightmare just before you meet your final doom. Now think about the rush of relief you feel as you take in the solitude...

Take peek-a-boo garters to the next level: peek-a-boo blood vessels and layers of muscle tissue, courtesy of open-wound prostheses and stocking accoutrements from Etsy's Meaghan O'Keefe. A pair of unpainted latex prostheses...

Zombies really have taken over the world, huh? Or at least the free market economy. The clever German capitalists who designed this introduction of the omnipresent living dead to the bowling alley made a good move though...

This is what we call an imperfect synergy. In the battle of the two tackiest, yet most often seen yard decorations (no offense fake plastic deer), it looks as if the gnomes have won. And it was bloody. Zombie gnomes 1...

Know how sometimes when you put a quarter in the gumball machine as a kid, you got ripped off and nothing came out? Well, that will definitely happen every time with this Gumball Machine Terrarium from Swingler Botanicals...

Blacksmith Stephen Heeney designed and welded this chain link axe himself. He does not recommend using it to chop wood. He recommends using it to hack the ever loving viral entrails and decaying brain matter out of zombies...

Whoa. Talk about an augmented reality arcade game. These cats aren't just 3D, they're eerily lifelike, from their bright eyes to their swishing tails to their fur that...actually feels like fur! Holy...oh. Wait. These...

As if $80 Jessica Simpson shoes, $14,000 Victoria Beckham handbags, and $50 Adam Levine perfume weren't scary enough, now the mall, just like the bowling alley, has been overtaken by zombies. Your mission: kill them...