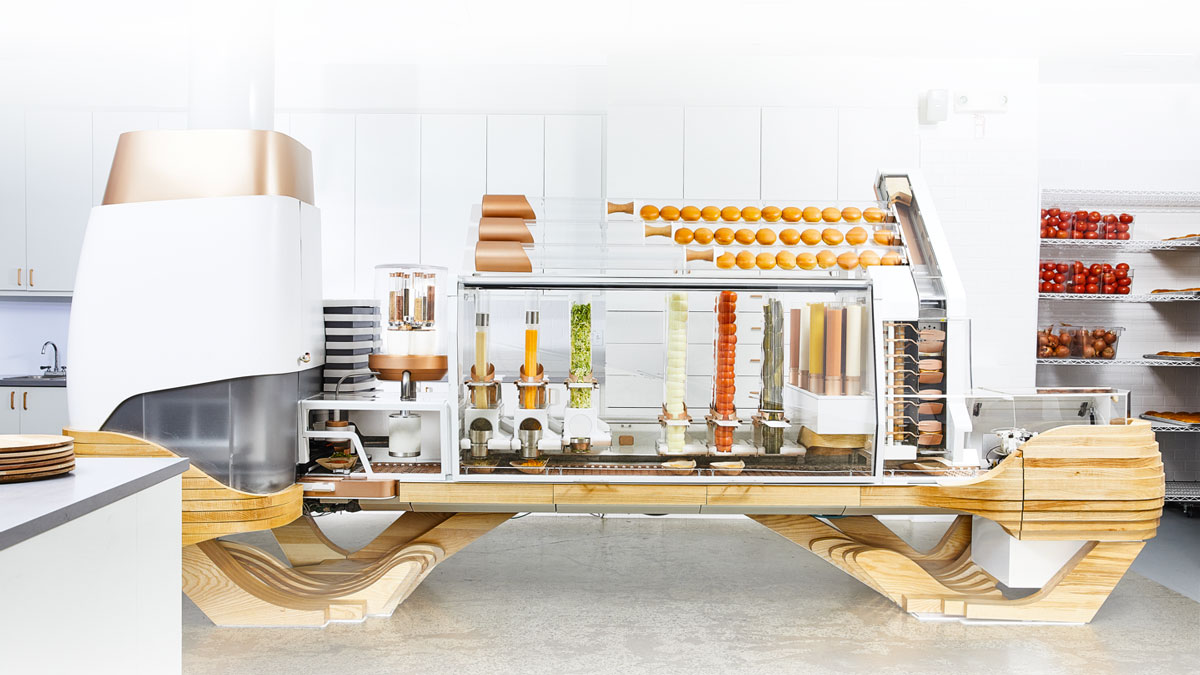 Creator, like any good chef, makes hamburgers from scratch. To order. With great care. But unlike just about every other chef out there (jury's still out on Giada) Creator is a robot. An elaborate burger-slinging machine. And not like your Uncle Jerry who always brags about how he was the burger-slinging machine when he worked at White Castle during college. Creator is a legit machine, 14' tall and fitted with 350 sensors, 20 computers, and 50 actuator mechanisms.

Exactly the specs the robot needs to fresh-grind and grill a 4-ounce beef patty and place it on a brioche bun, which it has already stacked tall with with sliced-to-order pickles, tomatoes, onions, lettuce, cheese, and one of several special sauces. And for a mere $6.

Creator works in the SoMa neighborhood of San Francisco, having just opened for business at the end of June 2018. A host of humans, some formerly of Tesla, NASA, and Disney are behind the robotic chef's debut; their culinary robotics company is also called Creator. On the culinary side, former Chez Panisse chef David Bardow is shaping the (currently) 4-burger strong menu and sides, along with a few other Bay Area chefs, including Nick Balla and Tu David Phu.

At printing, Creator was serving up meticulously-machined burgers only to those who have purchased advanced tickets to lunch there. And, yes, if you are able to score a Creator burger, there is a "there" you'll be able to go, sit, relax, and eat it. The storefront occupies 2,200 square feet of space at 680 Folsom St. The interior has white walls, a concrete floor, and wood-accented materials so, Creator says, Chef Creator gets all the attention.

The Chef's Press helps you smash your way to the perfect burger, and impress your dinner party guests with pristine criss-crossing grill marks on your chicken breasts and eggplant sides. Chef Bruce Hill created The Chef's...

My friend Dominic is an electrical engineer who used to work for this company developing a chip to implant in the brains of epileptics that would help predict when they were going to have seizures, and if I had one of...

I rounded up some of the best BBQ gadgets out there and took them to my grill. And I said, "Hey grill, how you doin'? BBQ season is so close I can taste the smoked brisket and wet-rubbed pork - you ready to start cookin'...

A hot dog sofa? A hamburger chair? Sweet! Now when I get ketchup and mustard all over my furniture it won't ruin it, it will make it better!...

This is SPAM! Rastelli's is SPAMming you! And they're calling it a Round Hot Dog to try to get you to fall for the trickery! I know because I had the same idea myself back in 2018. It all started in Germany, with a pub...

Cave Tools believes their burger press to be a champion of Larger, Thicker & Juicier. The silicone mold has 6 slots for creating respectable 1/3-pound patties, plus a built-in burger dimpler to dig a divot in each that...

Slice of Sauce is ketchup meets Kraft Singles meets Fruit Roll-Ups meets your burger. Your new and improved mess-free burger, since this dried tomato condiment trades in the globs of red goo for a solid, slim, slick...Slice...of...

Huh. I woulda thought scented candles would be something they'd make to cover up the smell of McDonald's Quarter Pounders in your home. But I guess that's if you're making candles for wives and mamas who don't want aromas...

Since any idiot can cook ground beef crumbles on the stovetop, my girlfriend often makes me do it when she's making chili or bolognaise sauce. And then goes all Meat Chunk Police on me, tossing out comments about how...

Even though the Burger Lift is kind of a head-scratcher--wait, why do I need a plastic rack in the shape of a burger to raise my real burger half an inch off the plate?--it still might be one of the most logical things...