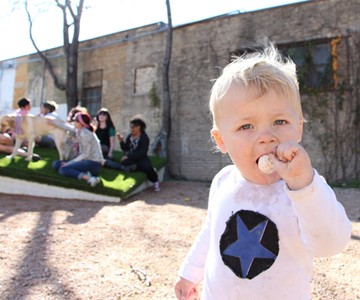 $10
from Lollyphile »
Check It Out

Oh, would that they were made of real breast milk...that would be F'ing sick. But in the grand spirit of edible items simply modeled after choice body parts*, the Lollyphile's Breast Milk Lollipops don't contain actual breast milk, only the mammary glands' most toothsome flavors. As most likely determined by a panel of men who at first refused to take part in the elixir of life R&D sampling process, but then agreed once they heard tastes would be administered directly from their source.

Breast Milk Lollipops' predominant ingredient is sugar, so kids would probably love them even if they didn't taste like Mama's teat juice, but one true service they could potentially offer would be to mothers who still breast feed their two-year-olds. You know, like maybe pull a quick switcheroo of nipple and lollipop to wean the suckling child and, in turn, stop giving me the heebie jeebies.

Thanks to Josh S. for the Dude Product Tip.

I spent most of the day contemplating how I might discuss The Big Book of Breasts 3D with the great respect and deference I feel for it and its contents, but without sounding too dry, detached, or clinical. Unfortunately...

I understand that Pinky Queen nipple...pinkener?...is a boobie beauty tincture developed with a female customer base in mind. And I definitely think females with nipples that are splotchy, unsavorily-hued, or look like...

F-Cup Cookies sound like they would be a joke, and they probably are, but for all women with concave chesticular regions and, more importantly, for all the men who have to fondle them, I sure as 2 seconds of motorboating...

Ugh, I am so sick of writing about boobs. Haha...sike! Particularly when the boobs come in so many exhilarating shapes and sizes and practically beg to be caressed. OK, so they're made of ink and paper, and technically...

Here comes the airplane! Titty Twirlers are propellor pasties that put a twist on the traditional showstopping effect we typically expect the wind to have on a lady's (or dude's, per the video) wardrobe. I mean, Marilyn...

I've found some choice anatomical optical illusions for your viewing pleasure this evening (or morning with your computer rearview mirror on your monitor at work). Most are just momentary illusions whose true nature is...

And you always thought she was an icy bitch because you couldn't get to second base. The Boob Luge puts a positive spin on the cold reality of interacting with women. Also, just like in the good ol' days of infancy, it...

I tried to crop out the part of the Yay Cleavage T-Shirt photo that shows the boobily blessed lady wearing it is pregnant, but I think you can still kind of tell. Sorry. I guess the V-neck may technically be intended...

Book of Things Better Than Boobs

When you see these Virgin Bust Breast Lift Pads do you think the same thing I do? Tune in, Tokyo. Tune in, Tokyo. No? Maybe just because you don't have all the information on the boobie-bettering cones yet. They fulfill...

Musch Musch Designs - Your Privates on a Pendant (NSFW)

And if you're not into your privates on a pendant, Musch Musch will also hand make (hand job?) photos of your very own penis, vagina, boobies, or butthole into a bracelet, a mug, or, for the ultimate dick pic, a 3D piece...