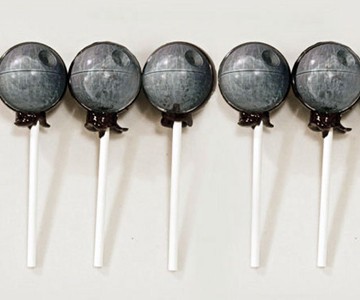 Sold Out from Etsy »
Check It Out

Death Star Lollipops. An excellent concept. And might I suggest throwing some Pop Rocks in there too during a suck session so they actually explode in your mouth.

On a par of clever equal to Star Wars chocolate Vaders and Millennium Falcons, but far less likely to melt in the sun (though slightly more likely to become inextricably entangled in girls' hair, requiring an unwelcome haircut, and severely damaging the odds of a second date--take it from me, don't lick Death Stars during makeout sessions) the DS-1 Orbital Battle Station lollipops enter existence at the hand of Galactic artiste Priscilla, who also designed and crafted their molds. She notes that completing each 6-pack of evil and destruction takes around 2 hours.

Yes, that's right: evil and destruction. Because if you think candied Death Stars are a safer choice than the real thing, don't let their edible designation fool you--high fructose corn syrup is just as dangerous as energy beams. Completing the chain reaction of spontaneous hyperactivity followed as suddenly by an acute desire for a nap are Isomalt and sugar. Lollipops are marshmallow flavored.

I'd call the Tungsten Sphere a desktop toy, but given its high density--at just about 2" in diameter the sphere weighs over 3 pounds--I'm not sure how much fiddling or stress-relieving palm rolls you'll be able to do...

Mama! I said I only want the Cherry Starburst! Only the Cherries! Ahhh, just remembering the days when my mama had to toil over picking out all the good Starburst, Skittles, and Tootsie Pop flavors for me. The days before...

Ahhh, a globe-shaped fire pit whose flaming cutouts are our planet Earth's continents. Just like my grandma always said: the next time the world goes down, it's going down in flames. This sinister piece of social commentary...

Sleep under the light of the moon even on stormy nights, and enjoy the orange blaze of Jupiter without making futile attempts to go to Jupiter with one of these sweet spherical lamps from Pulsar Moonlight. Each is a unique...

Solar System in a Bottle

While Little Planet Factory, like science, has also shunned Pluto as a planet in its Solar System in a Bottle, I think they make up for it by having crafted and calibrated the 8 remaining MVEMJSUN to scale. At 1:5,000,000,000...

According to 8Greens, one 8Greens Daily Greens Lollipops contains as much Vitamin C as 2 oranges, Vitamin B5 as 15 cups of broccoli, Vitamin B6 as 15 cups of spinach, Vitamin B12 as 7 cups of milk, and zinc as 3 cups...

Vader's words, "The Force is strong with this one," run along a plaque on the front of the LEGO Star Wars Death Star Trench Run Diorama, completing the 665-brick project, and the sentiment this iconic scene from Star...

If you weren't sweating the Dark Side before, one round with Onnit's Star Wars fitness equipment, and I guarantee you'll start. From kettlebell swings to hot yoga, Russian twists to Turkish getups, Onnit is injecting...

Why should ladies and rappers get all the fancy jewelry? John Biagiotti of Metamorphosis Design believes men should be able to get in on the expensive gifts and signs of baller status too. Men like you and me. Men who...

If you're too mature to display BioPop's Dino Pet on your desk...or just frustrated that your kids keep stealing it...here's a more sophisticated objet d'art containing the same glowing blue dinoflagellates. If you haven't...