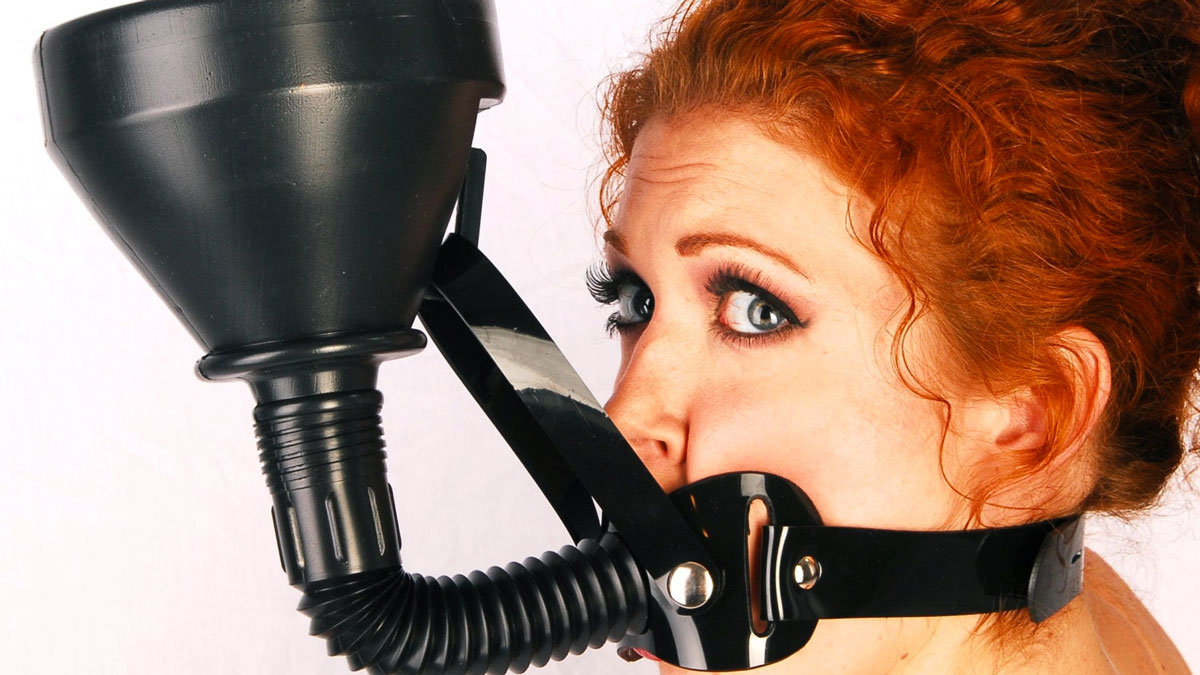 Who needs a gag gift? Yuk, yuk, yuk. Or rather, Glug, glug, glug if you're using the Funnel Gag Beer Bong correctly and like the Natty-Light-guzzling slave you are.

The Original Funnel gag consists of a leather strapping system that tightens around the guzzler's neck and anchors a high density plastic funnel to his or her forehead. The gag's mouthpiece and funnel's tube have been coated in synthetic rubber.

Inside, the funnel has a screen to slow the flow of beer through its tube, but during use I'd still keep one sober person on hand to rip off the mask and administer chest compressions should the gag bonging go wrong.

Four score and twenty years ago...no wait, that's a different 420. And, if I remember correctly, an ode to something not nearly as interesting as these 14 smokin' hot gifts for weed enthusiasts. One thing they do share...

If nothing else, the Studenglass Gravity Pipe at least appears to have Seth Rogen's hack of approval. According to a video the actor posted on his Instagram account, hitting the bong produced a delightful 25-minute coughing...

I used to prefer my knockouts served as Fireball shots and right hooks, but this Knockout, a new twist on the beer bong, might leave those standards unconscious and bleeding from the ear on the floor. Designed for attachment...

My favorite part of 7pipe's Twisty Glass Blunt video is the shot of a lady taking a hit off one and then blowing out birthday candles. Good stuff in, bad stuff out, and now we eat cake!...

420 Science breaks it out only once a year, so if a 14" long, 8-bowled glass Grav Labs Menorah bong is what you've been foregoing 20 sacks and Gordita Supremes to save up for since May, here's your chance to turn your...

Roll-uh-Bowl is your foldable, portable, indestructible bong on the go. A waterpipe for the adventurer, the backwoods trekker, the beach bum, the guy who drops, knocks, and sits on things a lot. Roll-uh-Bowl folds and...

The serpent is at it again. This time, though, its temptation is a pair of snaking, maze-like water pipes, since it knows you'll need more than an apple to succumb to Original THCin (that said, in a pinch, you can bore...

4/20 might be a "special interest" day for smokers and marijuana advocates, but for those who truly love smoking culture, this gallery of unique pipes, vapes, and smoking gear could be your go-to happy place all year...

No pipe? No papers? No hose, tube, or apple? If you've got the gnoB Socket water bottle cap you can take a deep sigh of relief...followed immediately by a deep breath in. The gnoB Socket is a sneaky little piece of EDC...

Classy is in Session. The Session Bong seeks to be your "beautiful, functional, and unapologetically simple" smoking companion. In other words, this is one classy water pipe. Session hopes it will also be the preferred...

In addition to my glory years of partying (i.e., any year prior to 2020) the Kong Bong makes me think of Sisqo's enduring lyrical masterpiece, "The Thong Song." A tweak here, a swap there, and it could become "The Kong...

Relax. Calm down. Funny how those have turned into fightin' words. On top of being difficult states to achieve even when some condescending butthead isn't issuing them as a command. If we were together I'd say no such...