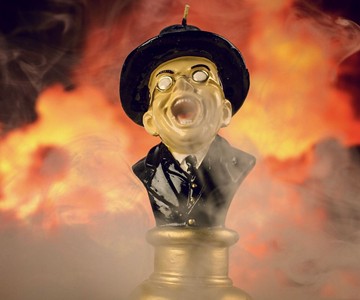 Nothing like a hot day in the south or the Ark of the Covenant to make you feel like your face is gonna melt off. Though after my wee and innocent 6-year-old eyes were scarred for life watching Major Arnold Ernst Toht suffer his fate with the latter, I think I'd take a broken AC in August in Dallas over gazing into a mythical relic of the Bible any day.

I do like this representation of Toht as a candle though. Ignite the fiery wrath of God around him (i.e., light the wick on top of his head) and Indy's Nazi nemesis from Raiders of the Lost Ark will melt and ooze away to nothing. The highly detailed candle was crafted after an actual facial cast of Toht actor Ronald Lacey's face. His trademark glasses, black leather jacket, fedora, and O (shit!) face haven't been overlooked either. A must-have for Indiana Jones fans and people who like melting human faces!

While I would prefer a wax color more masculine than pink, I--What? Pink is the color of unconditional love and nurturing? Oh. OK, Mama.--I guess my mama likes pink. Yep... Working from home today... Anyway, I applaud...

WTF does using the term "WTF" in reference to a candle mean? In a nutshell: "Mmmm, this smells incredible! Just like the apple pie my grandma used to make with the shortbread crust and the...gaaaaasssspppp!. W...T...F...is...

Diamond Candles makes candles (duh) with embedded diamonds (du...really?) Each candle is guaranteed to contain a sparkly ring for its burner to discover as the wax diminishes. Granted, they're not all diamonds, and they're...

My Last F*ck Candle. Presumably this is the one you'll burn when all of the disasters, the shockers, and the newest pieces of trash to hit social media become too much to process, too much to reconcile. When the only...

Man Cans. Scented candles for men. No. For Men. Endorsed by Thor, Indiana Jones, and the Dos Equis guy. This one smells like a spent shotgun shell. At $9.50, it also smells like I'm done looking for a Father's Day gift...

How precious. A floating puff of plant with an LED light at its end. Though overpriced by a factor of 8, the Torch Plant Light Botanical Candle is a clever centerpiece designed by Japan's Pianta x Stanza to look like...

Here comes the Earwax Candle Kit just when you thought you couldn't find the perfect gift for your mom. I don't know about yours but I know my mama loves candles, and also hates waste, and based on the number of used...

Yank Me Candles are terrific gag or white elephant gifts in the vein of WTF Prank Candles, but with a different kind of blood pulsing through them. The latter have delightful sounding names, such as Apple Pie, on the...

My 12-year-old nephew plays Minecraft all day long. I'm not exaggerating. I got him a lime green Minecraft Creeper Beanie for Christmas. So that if he ever decides to stop playing Minecraft and go outside his ears won't...

Now here's a bloody handy gift for Halloween. Bryan Lawrence makes these terrifically creepy candles, you guessed it, by hand, using flesh-colored wax for the outer layers of their fingers and palms, and blood-red on...

As if cats, and particularly cats that have been lit on fire, aren't scary enough. Now Thorunn Arnadottir had to go and make one that also slowly melts down to a sinister skeleton as the flames eat away its flesh. I don't...