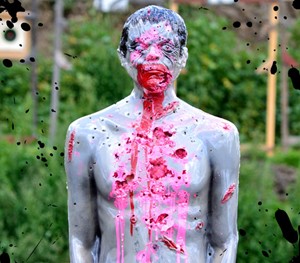 Target practice with human targets seems so cruel (although practical since most of the time it's other people that are getting shot). Why not practice drilling holes in things that are already dead and will probably at some point rise from the ground and seek to eat our brains instead? These environmentally conscious, biodegradable, life-sized Zombie targets actually bleed when you shoot them. Yeah, blood squirts and oozes out of the bullet hole. And each target can absorb up to 1,000 rounds.

The zombies come in many different hated historical and fictional figures from both past and present as well. There's zombie Osama bin Laden. Tactical Bleeding Nazi Zombie. Christmas Grinch Zombie (scratching my head on that one). And my favorite, "The Ex" of course only available in a female version.

Think about those nights you bolt upright in bed, heart racing, salty with cold sweat, awakened from a nightmare just before you meet your final doom. Now think about the rush of relief you feel as you take in the solitude...

Take peek-a-boo garters to the next level: peek-a-boo blood vessels and layers of muscle tissue, courtesy of open-wound prostheses and stocking accoutrements from Etsy's Meaghan O'Keefe. A pair of unpainted latex prostheses...

Zombies really have taken over the world, huh? Or at least the free market economy. The clever German capitalists who designed this introduction of the omnipresent living dead to the bowling alley made a good move though...

Why doesn't my Cubicle Warfare book include a chapter on How to Build a Micro BB Crossbow? Not that I wouldn't get fired for using it at the office. But we've had these "productivity enhancement strategy consultants"...

This is what we call an imperfect synergy. In the battle of the two tackiest, yet most often seen yard decorations (no offense fake plastic deer), it looks as if the gnomes have won. And it was bloody. Zombie gnomes 1...

OK, zombiologists, conspiracy theorists, slaves to sci-fi, and keepers of the Boy Scout motto, it's time to put your $24,000 where your mouth is. OpticsPlanet has assembled a stunning and formidable sprawl of zombie apocalypse...

The Compact Folding Survival Bow, or CFSB-1 for the acronym happy (I think the "1" indicates it's #1 in the world, like America or Megan Fox in a Supergirl outfit), is a patent-pending one-piece takedown bow milled from...

Rising from the depths of the earth...and your middle knuckle...the zombies are coming! So far, it's just their hands that have popped out of the graves, but just you wait. Where there are resin hands, there are resin...