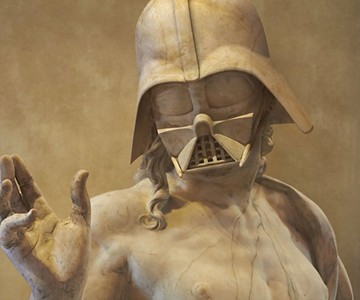 Travis Durden is the dude behind these glorious mashups, ancient Greek sculptures-turned-prints of our favorite Star Wars characters. A mashup himself, the French "Durden" is actually no Durden at all. He keeps his real identity a secret and goes by the pseudonym, which is a combination of characters from his two favorite cult films (Durden obviously Tyler Durden from Fight Club, and I'm guessing Travis is Travis Bickle from Taxi Driver, which makes me wonder a little about TD's mental health.)

Durden deems antiquity his primary skill as an artist, though his infatuation with pop culture often bleeds into his work. The above pieces from his "Expo Strikes Back" series are prime examples and, in my opinion, should earn Durden an exhibit at the Louvre. Or at least San Diego Comic-Con. He introduces the following men from a galaxy far, far away to a time long, long ago:

Ho, ho, h-oh no! Santa Claus has gotten himself into a Carbonite pickle! He might survive as Han Solo did, but wasn't Han also frozen up in the stuff for, like, a year? Bad news, kids. I wouldn't waste my time with cookies...

Star Wars onesies for adults are what's called being comfortably chic on Halloween, and F'ing awesome the other 364 days of the year. Boba Fett, R2-D2, a stormtrooper, and the grandaddy of being the worst daddy of all...

It's gonna be tough to schlep this garden gnome around the world with you for photo ops, but I'll bet if you do the 8-1/2-foot lawn ornament will help your Instagram account go viral. Who wouldn't want to follow Gottfried...

A stormtrooper who's packing nothing but Jameson and a Buttery Nipple is my kind of stormtrooper. I bet in whiskey decanter and suspended glass forms they're even a decent shot. At least until round 7 or 8 when your own...

What a piece of junk! Actually, I have no idea how well this Star Wars Millennium Falcon Wireless Charge Pad works, or how cool (or junky) it looks in person, but that felt like the right line from the film series to...

No longer must you search the galaxy to find this Rebel Bass, but you will have to wait at least 3 months to get it. Last Fall, after photos of his custom Star Wars guitars had gone viral online, Englishman Doni opened...