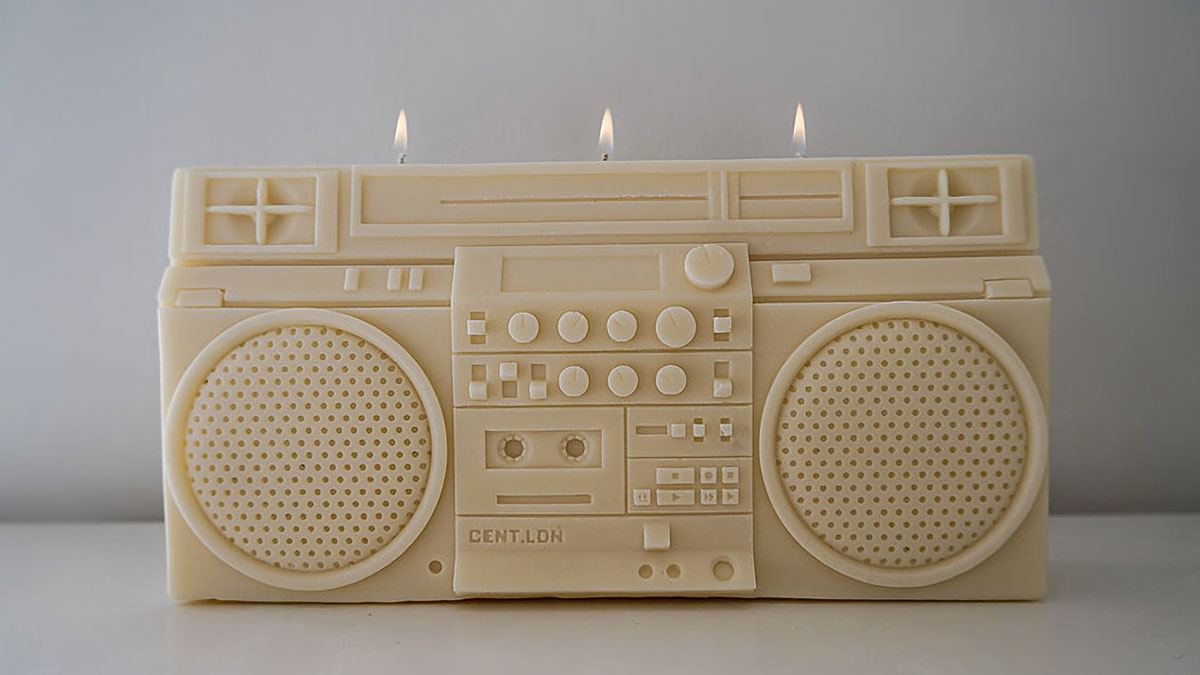 cent.ldn modeled the RC M90 Boombox Candle after the JVC RC M90 boombox, the quintessential 80s ghetto blaster, and the stereo featured on LL Cool J's first album cover. Released in 1985. When he was 16. The Beastie Boys also used the RC M90 boombox in a few of their Def Jam photo shoots.

Now here to delight 80s kids all grown up - not to mention provide some ambience and vibey relaxation alongside their glass of cab during a brief escape from their own kids - the RC M90 Boombox Candle is an intricate, near exact wax replica of the D-battery-sucking icon. It's a hand-poured masterpiece that will give the boombox a chance to light it up in a whole new way.

Studebaker's SB2140R Portable Boombox is a mashup of the ages. Housed in its prime 80s case are a Boomer AM/FM radio, a Gen X cassette deck, a Millennial CD player, and a Gen Z Bluetooth receiver and transmitter. The...

What's this? A circa 1968 suitcase and a set of Sony speakers turned into a portable stereo? Aw, Granny, good job! You made a ghetto blaster! And I thought our Merle Haggard Mondays and Tupac Tuesdays couldn't get any...

iLounge named G-Project's G-BOOM Bluetooth boombox Speaker of the Year in 2013, which I'm pretty sure is the audio equipment equivalent of Time giving Pope Francis Man of the Year. It's a pretty damn awesome and powerful...

Get fit in 2019 with Finger Breakdancing. They say it's easy on the joints, fun for the whole family, and requires coordination only from the knuckles down. Bust out the cardboard - oh, wait, it's included in the Finger...

Take new school back to the old school with this ghetto blaster fit for an iPhone. This is a true MP3 Ghetto Blaster that uses removable solid-state data storage. So, all you have to do is slam a thumb drive or SD card...

We used to call these "ghetto blaster" watches when I was a kid. Sounds a little racist now. Actually, saying it sounds racist is a little racist, but in and of itself, it isn't racist. I digress. It's a watch made to...

While I would prefer a wax color more masculine than pink, I--What? Pink is the color of unconditional love and nurturing? Oh. OK, Mama.--I guess my mama likes pink. Yep... Working from home today... Anyway, I applaud...

WTF does using the term "WTF" in reference to a candle mean? In a nutshell: "Mmmm, this smells incredible! Just like the apple pie my grandma used to make with the shortbread crust and the...gaaaaasssspppp!. W...T...F...is...

My Last F*ck Candle. Presumably this is the one you'll burn when all of the disasters, the shockers, and the newest pieces of trash to hit social media become too much to process, too much to reconcile. When the only...

Diamond Candles makes candles (duh) with embedded diamonds (du...really?) Each candle is guaranteed to contain a sparkly ring for its burner to discover as the wax diminishes. Granted, they're not all diamonds, and they're...

Man Cans. Scented candles for men. No. For Men. Endorsed by Thor, Indiana Jones, and the Dos Equis guy. This one smells like a spent shotgun shell. At $9.50, it also smells like I'm done looking for a Father's Day gift...

I'm not really sure why Woo More Play's sensual massage oil candle is named "Eat Me Out for Once." As far as I can tell, the muscle-rubbin' lube the melting wax of the candle produces is scented with sandalwood, papyrus...