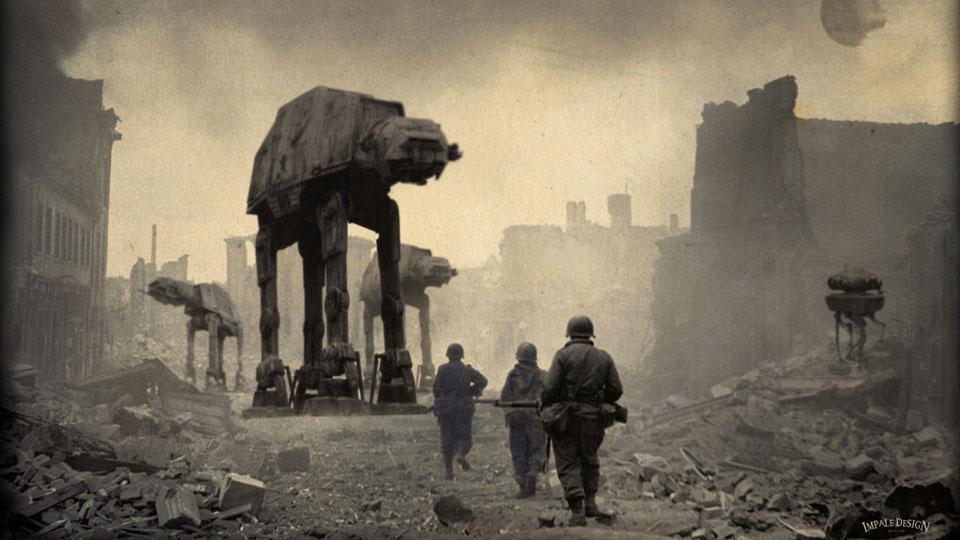 $25
from Thirteenth Floor »
Check It Out

Stirring scenes from American history, meet stirring scenes from American sci-fi. This set of 4 Star Wars prints from Thirteenth Floor pits some of the Empire's worst villains against some of our own greatest war heroes. Each of the 11" x 17" explorations of an alternate reality...or what really happened during WWII...is printed on 100lb matte card stock, and can be purchased individually for $10 a pop, or as a set for $25. Star Wars on Earth selections include:

If you like the Freaky Friday visual mashup aesthetic, check out these Patriots Being Badass prints too.

Muchas danke to Manny for the Dude Product Tip.

What a piece of junk! Actually, I have no idea how well this Star Wars Millennium Falcon Wireless Charge Pad works, or how cool (or junky) it looks in person, but that felt like the right line from the film series to...

Star Wars onesies for adults are what's called being comfortably chic on Halloween, and F'ing awesome the other 364 days of the year. Boba Fett, R2-D2, a stormtrooper, and the grandaddy of being the worst daddy of all...

An Encyclopedia of Sandwiches Poster, now that's a great way to ensure you know exactly what kind of sandwich you're eating whenever you eat a sandwich. And also to ensure you're always eating a sandwich, because who...

The Secret Lives of Superheroes Prints

Greg-guillemin reigns supreme: Best Paparazzo Ever. I knew Wonder Woman's rack wasn't real. But I have to say, I definitely took it for silicone over Kleenex. Her tissue-molding skills are impressive. Superheros may pick...

Evolution of the Bat-Signal Poster

Geez, 30 permutations of Batman's Bat-Signal from 1940 to 2012. I wish the stale logos of Ford and Chevrolet would take a page out of the progressive DC Comics' book. Maybe then I'd consider buying an American car as...