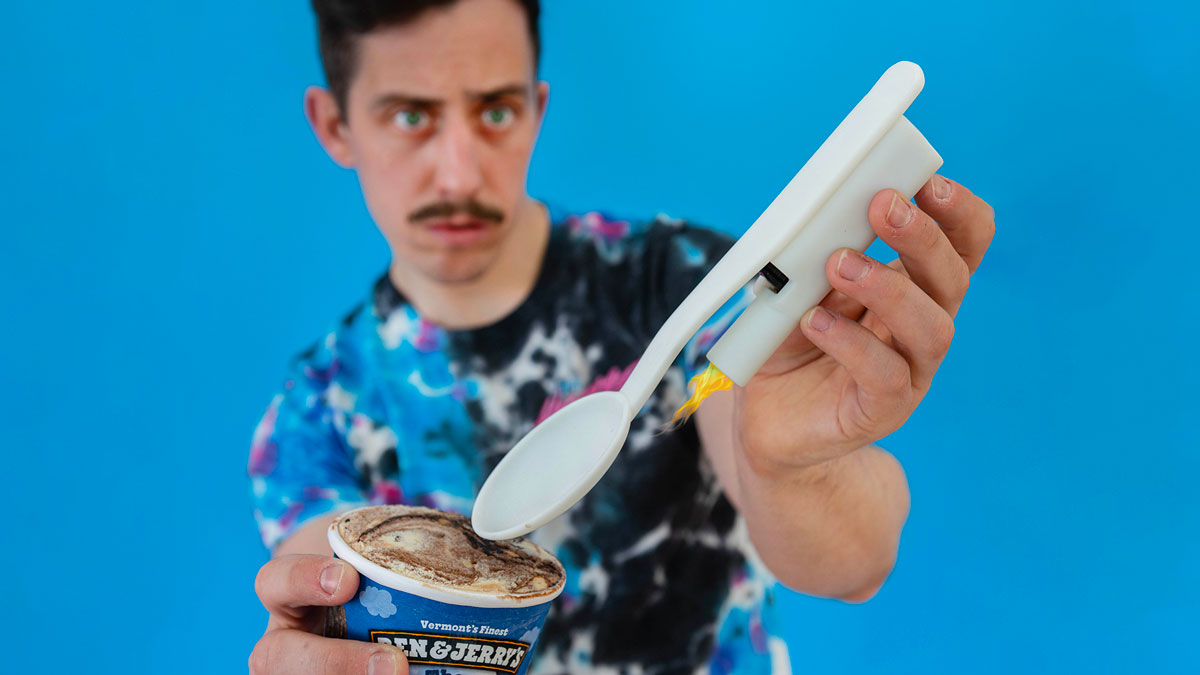 Ice cream that's too hard to scoop might not be the most pressing problem facing the world right now, but, I mean...it is a problem. And it's a problem, unlike most of our other problems, real and existential alike, that Matty Benedetto and his Sizzling Scooper have a solution for.

The Sizzling Scooper, essentially a spoon with an integrated lighter, makes digging into your first bite of brick-frozen ice cream magnitudinally easier by melting the top few layers down a bit with a flick of the lighter's flame. Benedetto's Sizzling Scooper design provides easy access both to a push button ignition on the lighter, and to your pint of Ben & Jerry's* once the flame is lit (i.e., the spoon end neither gets in the way, nor receives the brunt of the burn.)

And if you're wondering why Benedetto didn't build the lighter into the end of the spoon's handle, rather than underneath it, I think it's because the current configuration allows for the most expedient melt-and-shovel, melt-and-shovel eating process. You know, no flipping the spoon back around before you can dig in.

*Benedetto lives in Vermont, so obviously it's Ben & Jerry's.

According to Midnight Scoop, "YOU HAVE BEEN SCOOPING ICE CREAM WRONG." Like, wrong enough for the ergonomic ice cream scooper to be forceful and yelly about it. And it only gets better when they follow that statement...

Awww, look at the dimples and collar on this little guy. Joseph Joseph covered the interior of their Dimple Non-Drip Ice-Cream Scoop in hexagonal smile dents to make it easier to tap scooped ice cream into bowls or onto...

And the best part is, the Icepo Perfect Portion Ice Cream Sandwich Scoop scoops out perfect, 1/2-cup portions to make ice cream sandwiches out of store-bought cookies*, so it's even less work to make yourself a delicious...

The Pooch Power Shovel--essentially a rechargeable dog shit vacuum--may not collect the crap straight from the chute like the Piqapoo, but it still significantly reduces your proximity to and interaction with your buddy's...

Don't you consider breaking a sweat and popping a blood vessel in your arm part of the ice cream scooping experience? So that 35 minutes later, when you're finally able to sit down and eat your bowl of Moose Tracks, you...

I guess they call it the Midnight Scoop because that's about the time of night people start heading to the fridge for a bowl of munchie-, insomnia-, or Ambien-sleepwalking-induced ice cream and F up their wrists trying...

Pssst, here's the scoop: it's a cylinder. Madness! Madness! you say...

Yep, the Wim single-serve frozen yogurt maker is just what you're wondering if it is: a Keurig for ice cream. Just add milk to one of the Wim-Bowl ingredient pods, slip it under the appliance's churner, and press start...

While I think "Levoop" is a pretty dumb name for an adjustable measuring scoop with a built-in ingredient-leveling tool, I'd still be happy to own and use a Levoop to portion out my protein powder. My wife could use it...

HMM calls their coffee scoop the Sqoop. And what the scoop on this Sqoop is, is that it combines a square cast iron dipper with a solid teak wood handle to create a bean transporter your Colombian dark roast will feel...