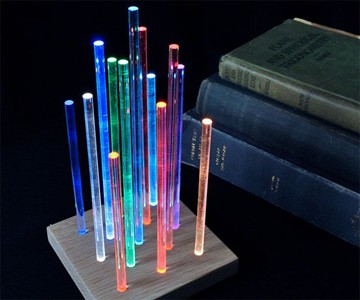 Although the shortest day of the year is behind us, we still have two solid months of darkness by 5:30 p.m. ahead, which is really depressing unless you consider what it must be like to walk around with Oprah Winfrey's fat ass, in which case it doesn't seem so bad. Acquiring one of Reuben Strangelove's Metropolis Night LIghts could also help combat the dark-day blues. In fact, his 13 illuminated rods fading in and out of their myriad spectral hues may even sway some of us into welcoming the sun's early departure as we muddle our way through January, February, and March.

Metropolis rods--so named for their allusion to a city of skyscrapers--are made of acrylic and set into a solid Red Oak base measuring 4-1/2" x 4-1/2" x 3/4". The lamp's total height is approximately 9". An on-off toggle switch controls the kinetic light show, which also claims energy efficiency, requiring only around 2-1/2 watts of power.

Merry Day-After-Christmas. Especially to those of you who received wads of cash from Santa, which Strangelove will gladly accept in return for one of his night lights.

The Vast Land Incense Burner Lamp is supposed to be a great companion for yoga or meditation, but looking at it kinda brings me the opposite of relaxation and peace. That lone figure walking along a barren terrain of...

This is a Spine Lamp. A spine lamp that doesn't forget the pelvis! And you shouldn't either, all ye back archers, tail tuckers, and hip droppers out there. See, you have to think of your pelvis as holding a bucket of...

I really appreciate how un-stuffy and...cheeky the Brits' sense of humor is. Sorry, humour. For example, I'd like to give whomever created this lamp a big slap on the back to show my admiration. And then a big approving...

I grew up with fireflies. And by that I mean I grew up squashing them and rubbing their bioluminescence on my arms and legs so I too could glow like a superhero or anomaly of evolution. I never saw any blue ones though...

While the Lugos multifunctional indoor / outdoor cordless fan is mildly interesting, it is nowhere near as interesting as the tent pictured behind it in the promo photos and video. Can you see what I see printed on that...

Everyone wants to be a hard ass. The Terminator. The Regulator. The Undertaker. Chuck Norris. Where's The Do-Gooder? The Helper? The Revitalizer? Relegated to the arenas of kindergarten classrooms and home decor, that's...

Now here's a lamp that really bridges the gap between art and functional lighting. Mark Mitchell's Bridge Lamp will obviously look outstanding running across your desktop or work table. But the designer says it will also...

I'm getting this lamp and putting it on my desk with a Krispy Kreme donut or a piece of gooey butter cake in the spotlight's dead center. It will be the first time ever some a-hole doesn't steal my food at work. Because...

Natural sunlight is overrated, but slatted blinds and electroluminescent lighting are even more badass than their hype. Cash in on coolness, and brighten up your basement apartment or 10 x 15 cubicle with this simulated...