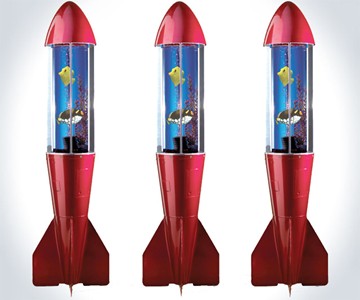 The MK-84, a general-purpose US military bomb, is known as the "Hammer." Here incorporated by the incomparably creative and mildly devious MotoArt into an 80" tall fish aquarium, appropriately termed the MK-84 Aqua Bomb, I think it is merited--and would even be remiss not--to say: Stop. It's Hammer time. The massive reimagining of a macrocosmic bringer of death and destruction into a microcosmic cradle of life and prosperity will even speak volumes to those who need to turn everything into an intellectually stimulating blah blah philosophical rumination instead of just accepting the aquarium for the chocolate-coated, caramel-filled eye candy it is.

MK-84 Aqua Bomb construction begins with the missile's tail fin assembly, painted hot rod red, and fitted with a 10-gallon Plexiglas fish tank. Topping off the look is a spun aluminum dome cap. The aquarium enjoys complete self-containment with a built-in pump, filter, and lighting. Fish are not included. But you knew that...right?

Want to know a little more about the MK-84? OK.

MK-84s rank as the largest in the US Military's Mark 80 series of bombs. As non-guided missiles, they are often referred to as "dumb bombs"--while aerodynamically streamlined, when dropped from their aircraft, they have no guiding system, but rather land wherever gravity dictates. Huh. Kind of like drunk hot chicks with no common sense. I hereby nominate the term "dumb bomb" for entry into the pop culture vernacular. But back to the weapon. MK-84s weigh up to 2,000 pounds, 945 pounds of which comprises Tritonal high explosive. Depending on its drop altitude, impact can create a crater up to 50' wide and 36' deep, as well as penetrate up to 15 inches of metal, or 11' of concrete. It can cause "lethal fragmentation" at a radius of 400 yards.

The MK 84 was used extensively in the Vietnam War and Operation Desert Storm, the latter of which used them frequently, and from every single aircraft that could be used on the ground offensive. Targets included artillery, trucks, bunkers, Scuds, surface-to-air missile sites, antiaircraft artillery sites, early warning radars, and supply points.

Interesting, but...I think I prefer it as a fish aquarium.

Don't just simulate them in a Jet Bed, realize your aero-fantasies with the Luxury Mile High Club Experience. Wish.co.uk, peddlers of myriad activities intended to prevent life and its inhabitants from becoming boring...

Holy hovering vehicle of flight! It's the ZERO concept helicopter from Spanish helicopter thinker upper Hector del Amo. How does it work? How fast can it go? How far can it go? Is it safe? Who the hell knows?! Apparently...

TRITON, the human gills design concept I showed you dudes here 2 years ago (and which many of you had mucho to say about in our comments section) is running a crowdfunding campaign to actually produce the equipment. TRITONs...

Wetsuit recommended, pilot's license optional*. FlyNano Proto, an electric, single-seat amalgam of a seabird and a seaplane, took its maiden voyages in Summer 2012. Now the Finnish company is working to develop its first...

Sometimes, actions speak louder than worries. Putting together a Kim Jong Un nuclear attack preparedness package doesn't just give us something to do besides sit around and worry about North Korea launching missiles and...

Oh boy. The magic of the sky meets the magic of where the magic happens. MotoArt, a group of daring-with-a-touch-of-devious mile-high artists, recycles old jet parts into exclusive, flashy pieces of furniture and home...

The Mercier-Jones' Hovercraft can achieve a lift of 8 inches. Wait, don't stop reading! I know that's not an epic flying car, or even Hoverbike, altitude, but consider this: would Big Brother really allow a private company...

Jetson calls their Jetson ONE "a commercially available personal electric aerial vehicle that you can own and fly." For our purposes, we'll call it a human-totin' drone...

Here comes the airplane! Titty Twirlers are propellor pasties that put a twist on the traditional showstopping effect we typically expect the wind to have on a lady's (or dude's, per the video) wardrobe. I mean, Marilyn...

An airplane with the cockpit of a Lotus sports car that can float or fly at the behest of a pilot without a true pilot's license. The ICON sounds like a terrific idea! Apparently in 2004 the FAA did something inconceivable:...

Moving goldfish out of the living room and into the bathroom for a perfect view of what will surely be their place of final burial, down the toilet, seems like an illogical move. That is, until you see this awesome fish...

This is one of the coolest products we've come across in a long time. These are real damn jellyfish swimming around in your house. This is a very legitimate site and has a solution for all budgets...