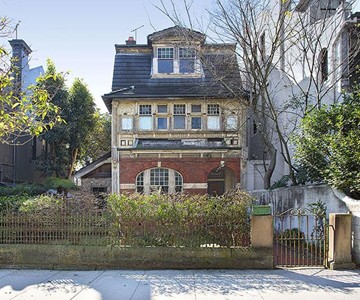 $2 million
from Raine & Horne »
Check It Out

Correction: Sorry dudes, this is not the Addams Family set house, inside or out, but a real Australian home that has remained unchanged since its late 1800s construction, and looks like a creepy mansion shacking up an occult family. I apologize for my previous erroneous statements, and also blame them on last night's tequila, karaoke bar, and greatest hits of Hall & Oates.

While you can't buy the actual Addams Family house--that was a set designed by Addams himself, the cartoonist who created the comic strip that inspired the iconic TV show--you can shell out for Verulum, a real-life Australian mansion that smacks of the kooky, spooky, ooky chez Addams. The home's highest bidder at its September 11, 2014 auction will receive the digs looking pretty much exactly as if they came straight from Gomez and Morticia's haunted reign.

Verulum sits amidst the modern, perfectly normal Sydney suburb of Paddington, but it hasn't been on the market since 1924. Built in the late 19th century, the home called Aunty Toots (!) its sole occupant for the last 90 years. She was one of the daughters of house's original owners, and apparently wasn't into remodeling and upgrades. It even still has the stables out back from its days as a farmhouse.

Other notable Addams Family-esque features include marble fireplaces, ornate 11' ceilings, leadlight windows, and veranda columns. The house has 5 bedrooms...which means someone is definitely bunking with Cousin Itt when he visits...and 2 bathrooms.

Louise Snowden of Raine & Horne Double Bay hold Verulum's listing, and is showing it Thursdays and Saturdays until the auction. The piece of history is expected to go for upwards of $2 million.

Gablok had a vision: a LEGO house that was life-size. Structurally sound. Insulated and livable. Up to code. And like the building bricks and blocks of our childhoods, constructed by our own hands...

How has a house-shaped inflatable tent like AirArchitecture not been the most popular camping shelter for years now? It makes every other tent look like only the measly roof got plopped on the ground. And even Heimplanet's...

If the UK's Spitbank Fort didn't look and sound like post-apocalyptic luxury at its finest to begin with, its location in The Solent, a major shipping route along the Isle of Wight, should cement the status. The Solent?...

Plat of land, plop down a Honomobo. It's what I keep telling my girlfriend when we talk about trading in her condo for a house. See, like the Simpsons, we live in Springfield, and home prices are ludicrous right now...

When the item in question is a house, how do you define "portable"? For me it was always the train car-looking mobile home my grandma's cousin Ella Mae used to live in that could be dragged from city to city in Florida...

Looper pods deem themselves portable, eco-friendly, pimped-out resorts modeled after the ultimate pimp mascot: the caterpillar. Yeah...I would've gone with some sort of spiny-backed reptile or ancient dinosaur or Bowser...

I'm nearly sold on AbleNook, a collapsible housing unit that requires neither appreciable time nor skill to assemble, based on its Kickstarter project's opening quote alone. From Albert Einstein: "We can't solve problems...

Industrial design firm 608 Design and architectural design firm BLDG Workshop teamed up to build the Bunkie, a portable, eco-friendly, prefabricated retreat structured such that the Big Bad Wolf will pop many a cranial...

Now that the British Pound has taken its first real hit in recent memory, you might start thinking about buying up some real estate in England. This 4-bedroom, 4,000-square-foot home called Underhill is a steal at $917,000...

Home remodels, upgrades, redesigns, and refreshes are still at an all-time high, with the pending arrival of cooler weather and, probably, more COVID indicating to me the Hygge-my-home thing is going to be a favorite...