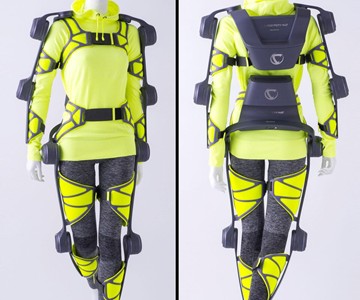 Japanese robotics company Cyberdyne began their Hybrid Assistive Limb, or HAL trials in 2012. A powered exoskeleton endeavoring to turn humans into cyborg-type robots, HAL has been tested largely in medical facilities thus far, fusing man and machine to improve life for the physically challenged, as well as increase strength and speed in the able-bodied to enhance performance. Now that the suit has received global safety certification and EC certification for clinical use in Europe, it could soon be a worldwide staple (for those who can afford it...) in places where people must routinely perform heavy lifting tasks, such as hospitals/rehab centers/nursing homes, factories, disaster sites, in combat, and during rescue missions.

While functional, the current HAL robot suit is pretty...chunky. A little BattleMech-looking. But more streamlined and lower profile designs are in the works. Tokyo product designer Tetsu Kataoka has created a prototype for one such next-generation HAL, which he recently presented at Tokyo Designers Week in Milan, and now has up on Behance for your viewing pleasure (and criticisms....)

While Kataoka offers no explanation of his HAL's engineering and technology, I for one think it at least looks pretty sweet. I might like to wear one just to set off the Miami Dolphins sweatshirt and orange Umbros I recently found in a box in my mama's attic, never mind that it might make me more powerful than a locomotive. This new robot suit also seems far more manageable for extended wear than the Robo OG. It's almost an Invisalign vs. head gear comparison. Hope it works out for you, Mr. Kataoka.

How Does HAL Work?

For those interested, here is some background information on the HAL robot suit.

HAL functionality is based on a 5-step process, the essence of which is the suit's ability to accelerate the motor learning of humans' cerebral nerves. When people want to walk, enactment of that motion begins in the brain; they think, "I want to walk." The brain then sends signals to the muscles needed to complete this request. While wearing HAL, the suit is able to read these brain signals along with the wearer's muscles because they also leak faintly onto skin surface areas as bio-electric signals (BES).

HAL detectors on the skin's surface notice and interpret BES, recognizing the type of motion a wearer intends. It is then able to move in sync with its wearer while its power units assist him or her in completing tasks with amplified strength and stability. Assistance is controlled by a combination of Cybernic Voluntary Control (CVC) and a Cybernic Autonomous Control (CAC) systems. The former functions in accordance with BES, and the latter takes over in the absence of the signals.

In addition to assisting the body, HAL also teaches the brain. This is key to the suit's ability to help the physically challenged learn (or re-learn) to walk. When the brain sends signals, it remembers how the body responds to them. If someone who normally cannot walk, or cannot fully walk, in response to "walking" BES slowly gains the ability with the help of HAL, the brain gradually learns how to emit the necessary signals to achieve this action. According to Cyberdyne, "this leads to 'the important first step' in walking of the physically challenged person without being assisted by HAL."

The fit is hitting the shan. The adrenaline dam has busted, and your fight-or-flight response is sprinting at a world-record-setting pace. What does it look like? Are you stepping up? Freezing up? Freaking out? Peacing...

Quick, someone get this cat a lance! He's scheduled to joust one of the guinea pigs from G-Force at high noon and only just finished his battle armor fitting. I don't know if he's ready for this. The pigs have been training...

JP Rishea of Bionic Concepts has created a bit of a name for himself in the cyber/steampunk gadgetry world. From his exo-gauntlet to his gas-powered LED wings, Rishea's designs always emerge as strangely tas

Conquest purports to marry "ultra-luxurious" with "fully-armored" in its forthcoming handcrafted SUV, the Knight XV. Historically, this type of marriage has not ended well (see: the reigns of Louis XVI and Marie Antoinette;...

Buckle up, boys, it's October 1. The onslaught of sexy Halloween costumes is revving its 400-asspower engine. Segue into the spectacle with a looksee at Spanish designer Boyd Baten's cyber armor. No, wait, I mean Boyd...

I had a guinea pig as a young boy. I named him Ruffles because he and I both were somewhat effeminate. They didn't make polished steel scale outfits for guinea pigs back then. And I have to admit, taking in this majestic...

Me: One 13-foot-tall, 9,920-pound menacing robot that I can either ride and pilot with mere hand and body gestures from a cockpit, or control remotely with my 3G connection, please...

Get a FORTIS exoskeleton and you'll instantly have: 1) superhero strength; and 2) a superhero costume. Two birds, one stone. Like Iron Man. Lockheed Martin is developing this unpowered, lightweight external structure...

See, chivalry isn't dead. It's just been co-opted by the hoodie-wearing hipster crowd. This Medieval Knight Hoodie drips of irony akin to permutations of the mustache, and trending fads akin to bacon two years ago. Thanks...

My theory is that this might actually be Optimus Prime and this guy has captured him, found some way of disarming him, and is now trying to sell him. I don't know if I'd be comfortable sleeping with this guy roaming around...

JP Rishea masterminds a legion of sick conglomerations of metal and power, but the Exo-Gauntlet is probably his most irrationally needful of them all. I guess one could technically argue that it has a few practical applications...