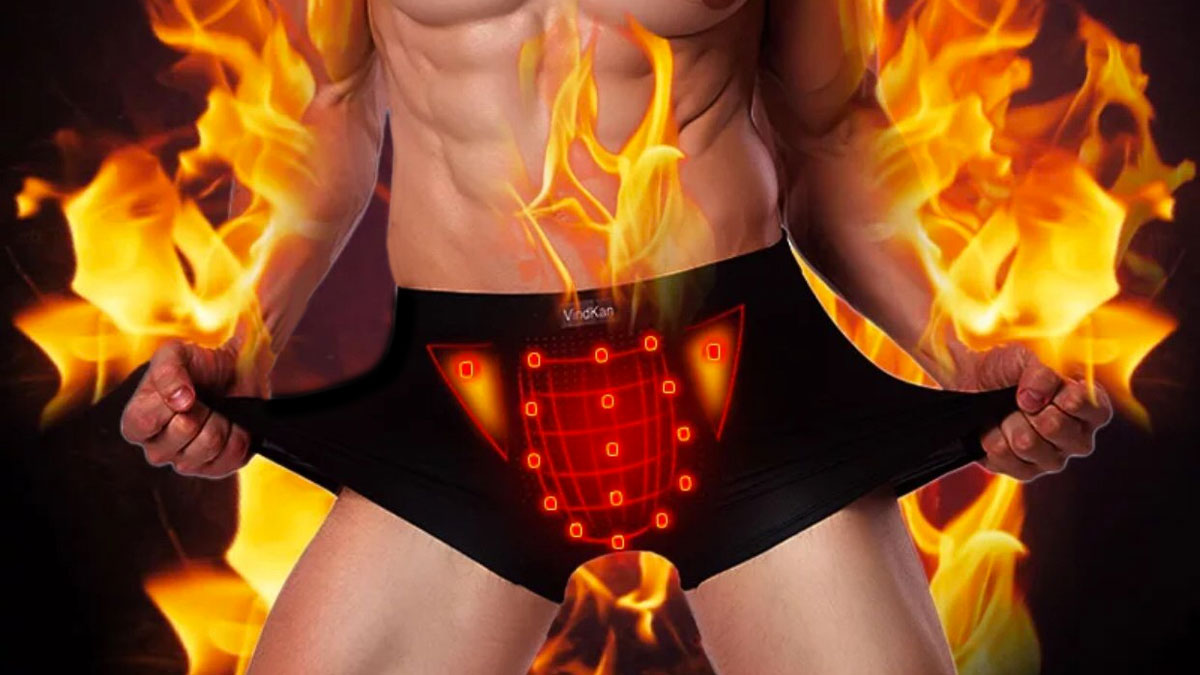 Happy New Year from your penis, the little pants snake that thinks VindKan Penis Enlargement Underwear might help him show up to 2020's ssssex ssssessions a little less perky garter and a little more long, lashing anaconda. Yeah, I agree. The Penis Enlargement Underwear are probably nothing but a can of snake oil - VindKan even sells them in a can - but maybe, just maybe they actually work.

And what's the worst that could happen even if they don't? You end up with a snazzy new pair of underoos.

According to VindKan their Penis Enlargement Underwear "radiates energized magnetic field 24 hours a day." Wow, does that sound like...the opposite of something that would enlarge your penis. Supposed additional benefits of perpetual magnetic field exposure include: treatment of urinary tract and urination issues; activation of body cells; kidney strengthening; improved sperm activity; treatment of impotence and premature ejaculation (both!); boost of immune system; and general improvement in quality of sex life.

And therefore, all of life. Ah, VindKan, would that it were true.

I brake for dicks. No wait, you brake for dicks. At least once I've secured a couple of Dick Brake Light Prank Decals onto those wee red covers on the back of your car. And by you, I mean my friend Cornelius, because...

And you thought you had run out of good ideas for date night. The Clone-A-Willy Penis & Balls Molding Kit will put your relationship skills to the testes, requiring both partners to perform dick moves to assist one in...

How to Pee with Morning Wood

A self-help guide to dealing with the enormous issue I face first thing in the morning every single day of my life and it's packaged as whimsical wall art that will add immeasurable character to my bathroom? How to Pee...

It's the one body part P90X neglects. But before you reach for a Viagra to long-and-strongify your johnson, the Private Gym would like its shot at ripping your penis to shr-...uh... Maybe I'll go with a different idiomatic...

All the talk of building a prison body during quarantine made me seek out this penis weight set. Because while you can certainly do pushups, pullups, chinups, dips, and squats like a convicted felon, it's gonna be real...

Cozy up next to the fire pit with a warm, cuddly...cock & balls?! This Crochet Penis Blanket from Naughty Mature Gifts will make you snug as a bug in a...er...opposite of rug on cool summer evenings and <a href="https://www.dudeiwantthat.com/blog/the...

D*ck in a Box is back! Just in time to dil-dole out some good times at the office and an April Fool's Day gift or two. Like many popular send-it-anonymously pranks, maker Witty Yeti will take a sworn oath to mail your...

"Make 2021 the year of ballsex!" Well, balldo, it's not the worst idea anyone's ever had. Plus, given all the horrible things 2020 was the year of, and the lackluster way 2021 has kicked off, a brand new ball-dildo that...

How to Live with a Huge Penis

Puberty was a really uncomfortable and difficult time for me. To the point that my mama went out and hired a shrink. At the end of the second session though he put his pen down and said, "Son, you really don't need me...