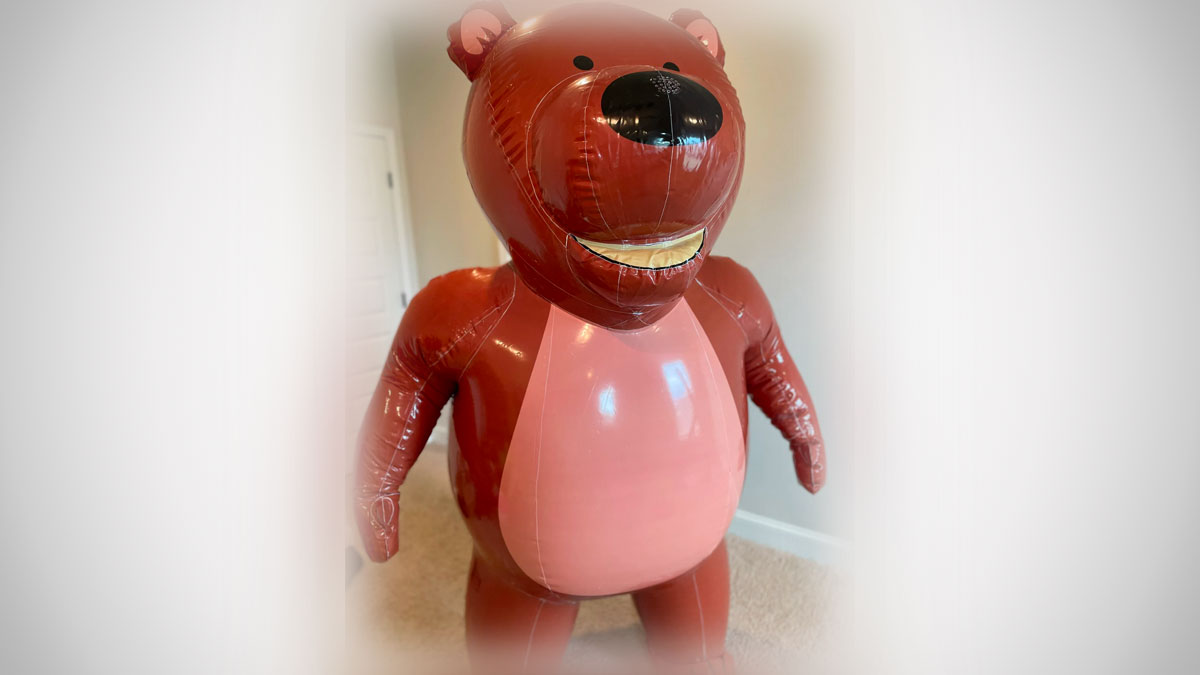 This Inflatable Bear Suit from Candy Coated Squeaks isn't quite as baffling as the design shop's Inflatable Beach Ball Underwear, but...it's still a little baffling. And still potentially deadly, I'd think, albeit due to a risk of heat stroke or suffocation due to full-body envelopment in PVC, rather than drowning due to it's inverting you face-down in a body of water.

Another thing about the Inflatable Bear Suit is that I can't figure out if it's supposed to be fetishist, or otherwise sexual, in nature. That goes for the Beach Ball Underwear, and most other items in the Candy Coated Squeaks Etsy shop, too. So first, all of their designs come with the disclaimer, "Our products are meant for users age[s] 18+ and require a customer safety agreement for any wearable item." And, sure, that could just be because of the aforementioned death hazards associated with PVC. But also...

A lot of their wearable items have holes in them. Penetration holes. Not all, but there's a blue whale, and a zebra, and even a hippo that indicate they have one or more "holes" in them. It's enough to make me think I'm not getting something here, and to feel somewhat uncool and FOMO about it.

I just named a bear one of my Top 10 choices for animal reincarnation, and now, as if in answer to my plea to the forces of nature, the Griz Coat is back. In time for winter. In time for the holidays. In time for looking...

If your life could use some peace and tranquility, look no further than the Resting Bear Ottoman from Design Front. I guess I should throw cute preciousness in there too, since ol' Resting Bear is really tugging at my...

Etsy vendor Nichola's Knickerockers, underwear with adorable animal faces strategically sewn across one of my favorite places on earth, are pricey. But to all ladies who often get mistaken for Victoria's Secret models...

This anatomical view of what lies beyond the high fructose corn syrup and Yellow Dye No. 5 of their epidermises paints Gummi Bears in a new light. Gives them some identity. Some humanity. Makes me feel kind of bad for...

Not to be a wet blanket about something as adorable as a bowl with a polar bear chilling on an iceberg at its center, but, uh, pretty soon the image is going to be a snapshot of history. A myth-like representation of...

Ladies, if Griz Coats are too big, too masculine, or too covering of the neck down for you (read: for me), how about one of these minxy little animal hoodies? Most of them even extend along the shoulders into a cozy pair...

Whoa. I thought the scariest thing I'd ever seen was a real live British boy who looks like Chucky, but Undead Teds have staged a coup and now reign supreme. Even if they don't have the same bone-chilling, soprano accent...

Although this grizzly bear won't tote you around on his back and serve as your mystical forest companion, chances are he also won't eat you when you plop down on or dive bomb him while he slumbers. Because this is a Big...

These Feisty Pets are the perfect way to teach your kids about the true nature of animals. All cuddly puppy and squishy bear and magical unicorn at first sight, but get too close and...Rrrrrawwwrrr! Back the F off, son...

Obviously the best thing to do when a grizzly is attacking you is punch it in the face or, if you're a lady, kick it in its twig & bear-ies. But if for some reason when the moment comes you can't remember how to make...

Why do people always diss Mark Wahlberg? He makes such quality movies with filthy-mouthed talking teddy bears. And from forth the cinematic masterpiece that was that Ted comes the plush masterpiece that is this Ted. A...