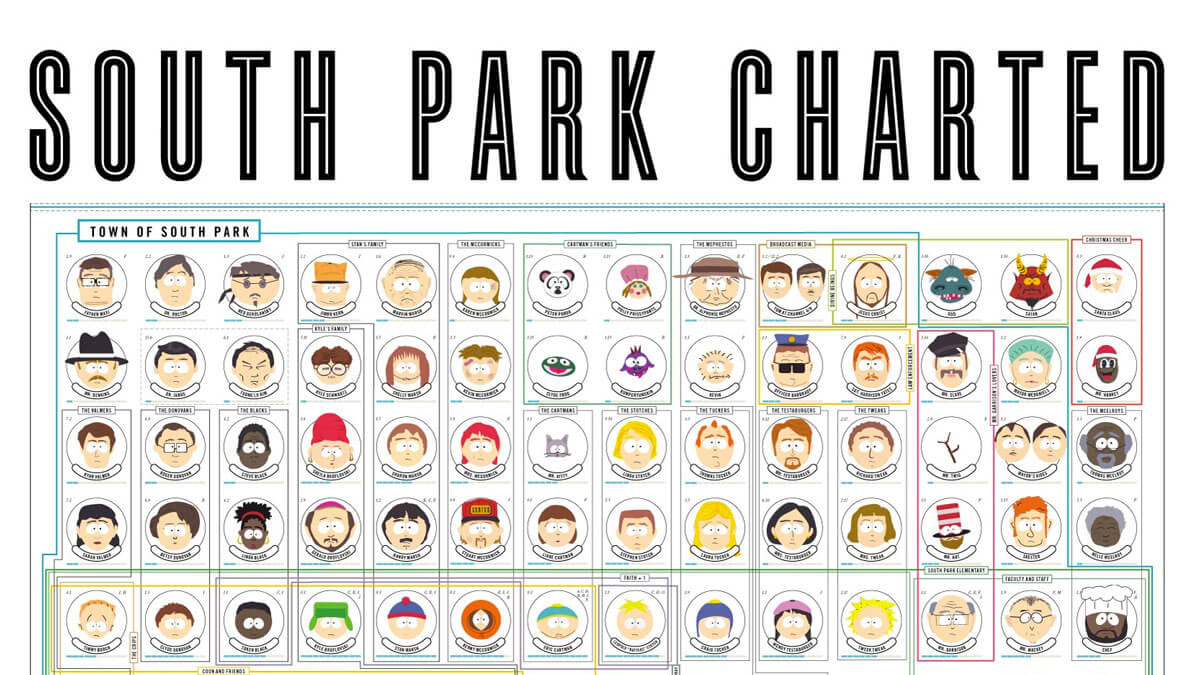 In case you forgot, South Park Charted is here to help you 'member. 'Member what? All twenty seasons of the show's most memorable characters and references, including the citizens of South Park, "The Many Guises of Cartman" (Appendix A), "Reasons Butters Gets in Trouble" (Appendix D), and "Kenny's Deaths" (Appendix J). And the best of South Park Charted: no memberberries - just good vision or a good pair of glasses - are required to use it.

Another neat release from Pop Chart Lab, the South Park Charted poster measures 24" x 36" and sells as a print unframed, framed in your choice of wood / color, or mounted on a panel. The chart distinguishes over 130 characters, categorizing them into groups such as "Canadians" and "Faith + 1." Each character also gets a notation indicating when s/he/it first appeared on the show, and total number of appearances. I'm sure all of that data is archived for easy Ctrl+F-style access, but can you imagine if someone paid you to be a South Park statistician, and watch all 283 episodes to collect it? That would be right up there with getting a job as a professional potato chip taster for me.

Being a villain isn't cheap. So, like most actors, rock stars, and former Presidents, villains raise funds for the administration of havoc and execution of attempts to rule the world by selling out. The Villain Chair...

I still can't believe they once let snaggletooth Kirsten Dunst play Mary Jane Watson. Sideshow Collectibles' statue would have made a better ultimate girl next door than she did just kneeling there silent and unmoving...

Some would say the Teenage Mutant Ninja Turtles are making a comeback. LL Cool J would probably say don't call it a comeback, they've been here for years. Teri Hatcher and John Travolta would warn Leonardo, Michelanglo...

Cartoon Portrait of You

For as little as $5, Uruguayan artist Eliana Fernandez will send you a glimpse of yourself inside some of TV's most popular animated series. Kick off the return of The Simpsons and Family Guy, or bid farewell to Futurama...

Instead of outgrowing your superhero, fairytale, and cartoon character childhood toys, let them mature with you. Preserve their magnificence, and thwart being labeled a creepy action figure nerd, with Evil Robot Designs'...

Need your video games and comic books on you at all times? Deja Neuf Heures has come up with a slightly different way to accomplish that: hand-painted cel shaded jeans...

Stripes or solids: what kind of panties make you want to make it rain? Aside from my girlfriend and my mama, I wonder how many ladies would slap me if I walked around town with a plaid upskirt shot printed on my umbrella...

Have you ever wondered if the superheroes, animated icons, and comic book stars you see in pop culture are hiding something--a demure inner self, a secret identity, an ugly mug, James Franco--behind their masks? I haven't...

Totoro. My neighbor. My friend. My giant pillow of a bed. I think this version of the rotund-bellied wood spirit might even be to scale with the original anime Totoro. And even if your kids have no idea what My Neighbor...

If given the choice between the Teenage Mutant Ninja Turtles Bra and Miss Pamela's Ninja Turtles beanie, most men would probably choose the beanie for themselves and the bra for all ladies. But not me. I would choose...