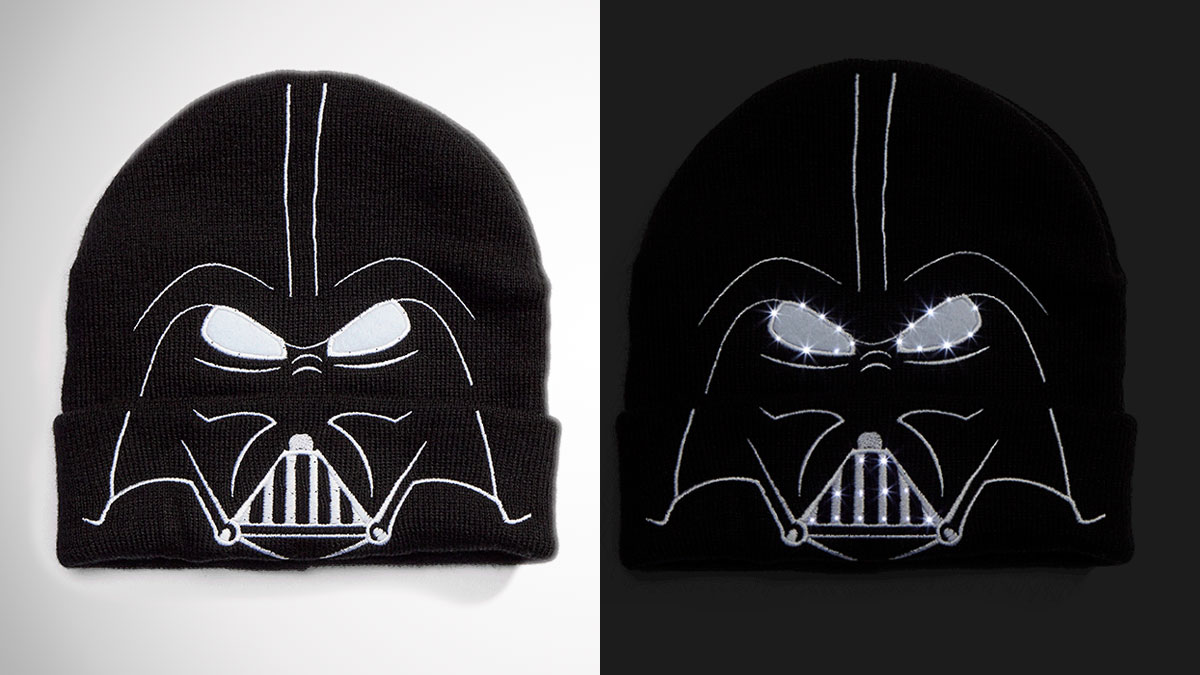 Vader goes a little Vegas this winter, lighting up the night as an LED beanie. Don't worry, Dark Lord. ThinkGeek has made the effect subtle - cold white lights around your helmet's eyes and mouth grilles only. No flashy, rainbow, or celebratory colors that might make people think you went out and joined the Rebels. Or the circus.

A top Star Wars gift for the season, the Darth Vader LED Light-Up Beanie is a knit dome with Vader's likeness embroidered out in white on the front. A button on the fold-over cuff activates the LEDs. Press once for a solid glow, and twice to make them blink.

The Darth Vader Beanie runs on 2 x CR2032 button cell batteries (included). It has a 17" circumference unstretched, which ThinkGeek notes will fit most heads. Except, probably, Lord Vader's.

Star Wars Day has come again, and along with saying May the 4th be with you in 2021, I can also offer you this collection of 13 of the best Star Wars gifts the galaxy has afforded us in recent times. Hint: It's a lot...

The Jedis may have the Force, but the Dark Side has power. Tons of it. Enough to take your iPhone, Android, or Windows mobile phone from dead to fully juiced and ready for battle. One round with the Darth Vader lightsaber...

Use the Force Bathroom Art

When mere pushing, grunting, and clenching every other muscle in your body while sitting on the toilet doesn't work, use the Force. Or at least stare at this Use the Force bathroom art hanging on the wall for some comic...

I Will Not Be Your Father Condom

Nice. A condom to carry my message to all the unborn children in the world. Attention would-be zygotes! I WILL NOT BE YOUR FATHER!...

Ural's Dark Side has...bench seating and a sidecar? A trunk? A max cruising speed of 70mph? The company, a US-based affiliate of Russia's Irbit MotorWorks, has just released the Dark Force motorcycle. It won't take you...

Artists Bucket Art and Ashley Raine aren't the first Star Wars smarty pants to parody the franchise and immortalize characters ranging from Darth Vader and Stormtroopers to Chewbacca and R2-D2 in pieces of offbeat - and...

Costume Craze has released a whole line of Second Skin Star Wars suits for 2013, but I feel like if a man is going to put a definitive outline of the family jewels on display, the face of a Wookiee would complement them...