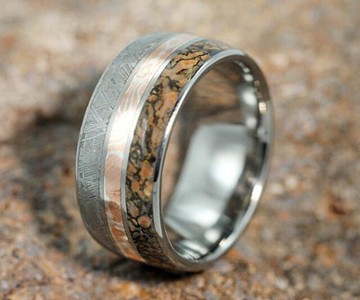 If your special someone is really that special, you won't just give them a ring, you'll give them a ring from a bazillion years ago! A ring that symbolizes how grand, vast, and enduring your love is. A ring that proves the two of you won't simply last forever, but have been fated to fade into one another's arms since that ginormous F'ing meteorite dealt death and destruction across our lands, decimating the entire dinosaur race, and leaving behind millions of lifeless piles of flesh to rot, fossilize, and sink deep into the earth! Johan Rust makes just this intensity of ring. In fact, he has about two dozen of them in his meteorite & dinosaur bone collection.

Inlays of Gibeon meteorite and agatized dinosaur leg bone from the Morrison Formation in Utah decorate these standout titanium and 14K gold bands. The rings' Gibeon meteorite material entered earth's atmosphere about 30,000 years ago* (at a rate of 17 miles per second!), exploded in the air, and showered its fragments over a large span of Africa. Prior to that, it spent 4 billion years cruising through outer space and chillin' with Dr. Who. Today, over 54 tons of Gibeon is on display in museums and university collections. Its largest recovered mass weighs 1,450 pounds, and is located at the South African Museum in Cape Town.

Inlaid dinosaur bones also have varying colors--and precise ring hues cannot be guaranteed in this regard since acquisition is rare and inconsistent. The agatizing of the fossilized bones is due to their cellular structure's replacement by quartz. This leaves the bone structure intact, but, along with impurities that were in the surrounding sediment, affects coloring, which ranges from brown to black, with splotches of red, blue, and yellow.

The Morrison Formation the dinosaur bone hails from covers 600,000 square miles over several states. The fossils date back to the Jurassic period, meaning they are a minimum of 65 millions years old.

All meteorite & dinosaur bone ring inlays are entirely seamless. Like all of my transitions in life.

*So, no, not really the same one that potentially wiped out the dinosaurs.

Jeff McWhinney designs wedding rings for men who move. Like a little more than from their desk to the john, the car to the house, and the couch to the fridge. Hikers, golfers, climbers, weight lifters, even really intense...

August 2013 Update: Thanks to crowdfunding campaigns, concept products are making their segues into reality much quicker these days. Two years ago, the Ring Clock emerged from a Moving Innovation challenge set forth by...

Want to feel close to a loved one far away? Or in the next room when it's too much work to get up off the couch? As part of their mission to "make the most personal connecting tools," TheTouch is finishing up development...

Moonglow Rings take minimalistic colored and metal bands on a trip through classic sci-fi adventures when the lights go out. Though Black Badger Advanced Composites' glow-in-the-dark finger decor comes from Sweden, not...

The screwy thing about this ring is...literal. And only literal, because the Screwdriver Ring isn't weird or messed up at all. It's awesome!...

I'll pass on wearing my heart on my sleeve, but my family honor on my finger? Yes please, pass me a Personalized Family Crest Ring...

At this point you could put a different type of smart ring on every one of your fingers if you wanted. The NFC Ring is a programmable piece of smart jewelry you can wave around powerful wizard- or dismissive CEO-style...

So, the dinosaur foot of this Dinosaur Foot Waste Basket from Regal Robot is huge. Maybe even life-size, depending on which dinosaur they've taxidermied to make the trash can. But the actual garbage container, the liner...

Ladies with a vendetta, or a penchant for jewelry that also serves as a weapon, I'm afraid you can't buy the Femme Fatale Ring Gun. (Unless the person who paid $11,350 for it at auction would be willing to sell it to...

Rising from the depths of the earth...and your middle knuckle...the zombies are coming! So far, it's just their hands that have popped out of the graves, but just you wait. Where there are resin hands, there are resin...

QALO, you win. Best line I've read all month: "After getting married we realized what a nuisance wearing our traditional wedding band was." I know, right? Suddenly women at after-work happy hour are turning down your...

Poor bastard flailing in the jaws of this 7-foot T-Rex inflatable. But on the bright side, at least the big, skeletal beast isn't eating you or your kids as a human snack, and now he'll be too full to do it when everyone's...