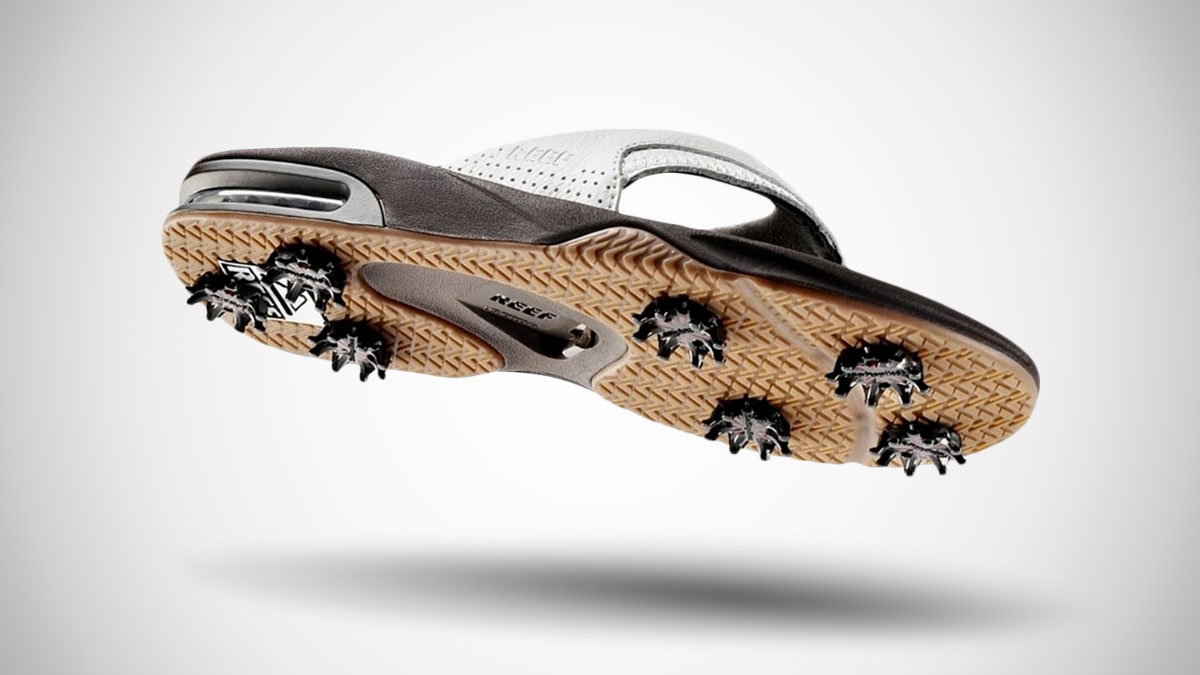 Not sure about the flip-flops part, but Reef's Spackler Golf Sandals aren't wrong in suggesting golf and beer go well together. A (very) limited edition release from the brand, the Spackler Golf Sandal builds on Reef's line of Fanning Sandals, the latter named after champion Australian surfer Mick Fanning, and those known, a beloved, for having bottle openers built into their soles.

In addition to cracking beers, the Fanning Spacklers, or Mick Spacklers, have 7 replaceable spikes screwed into their air-bubbled sole to help you crack balls on the golf course. Well...maybe pitch & putt...the driving range...or Top Golf. Not sure how many respected golf courses are going to go for players golfing in flip-flops. Even if you offer to share some beers, and open them with your foot, for them.

Reef hit a hole-in-(a-cold-)one with their initial Spackler Golf Sandal release, selling out immediately. But it appears they're game for playing another round, and at printing the Reef website had a signup available for notification when the Spackler Golf Sandal returns. You can also check Amazon, which carried the crazy cleated bottle opener filp-flops for their short run too. Or get yourself a showy pair of Reef Mulligan II Flip-Flops instead.

The bad news: Solethreads Recliner Flip-Flops are not made from actual recliners. The good news: they're made from actual yoga mats instead. This is probably even better because, while recliners are indeed muy comfortable...

Link flip-shoes, a hybrid their makers call "free like a flip-flop, safe as a shoe," are here to prove you wrong about at least one thing: no matter what you thought about Crocs or Keen Uneek monstrosities, Redneck Boot...

When I say GUDO's flip-flops have footprints embossed in their soles, what I really mean is the summer sandals will leave behind marks in the sand that look like a human mated with, like, a palm tree. Or maybe a nice...

FlipRocks are a far cry from your average flip-flops. Buuuut, they seem to be right in line - or rather, right in injection-molded removable grips with extreme traction applications - with your average dad shoe...

Actually, what I should say about this wild footwear is that the roundup contains 9 fun and funky animal shoes, and one pair of spooky and possibly sadistic animal boots. Scroll on down to number 10 to see what I mean...

My foot in your ass doesn't sound so bad when I'm wearing Rose in Good Faith's recycled sex toy shoes, 'eh? Called Plastic Soul, the slip-ons look like a cross between Crocs and New Balance 624 Dad sneaks, neither of...

Oooh, lobster sandals to match my sunburn, and everyone's favorite thing to say when I get a sunburn: "Dude's red as a lobster."...

I like the sound of Massage Bubble Slides. But, come on, these are clearly Epcot Center Clogs. And the brown versions of the EVA foam footwear are Ballpark Peanut Sandals. And the pink ones? Lychee Slippers...

Shark Week may delight you only one week a year, but these versatile Shark Pool, Beach & Shower Sandals will bring joy throughout all 52 of them. Wear the unisex sandals to the beach or pool during the summer months...

Welcome to the shoepocalypse. Crocs has teamed up with Japanese fashion brand BEAMS - again, apparently - to bring you, me, and the whole ugly-plastic-shoe-loving world the Crocs x BEAMS Bespoke Classic All Terrain Clog...

The best men's slides are boxed and ready to walk you right into summer. Right 'round the beach and pool. Right down the street on a beer run free of wool socks and a down jacket. And, oh yeah, right into the fetid shower...